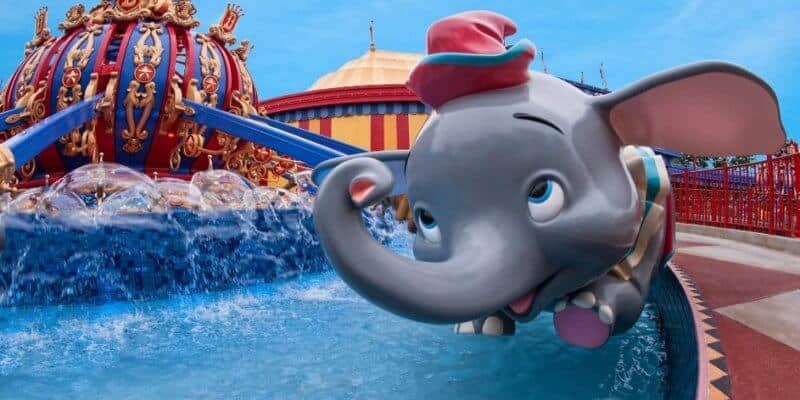 It’s no surprise that one of Disney’s most iconic and family-friendly rides is Dumbo the Flying Elephant. Next to the Carrousel, this original attraction is a staple in Fantasyland, and is known to be the only attraction seen around all six Disney Parks across the globe!

Dumbo’s character is sweet and very relatable to everyone. I still remember that feeling of seeing Dumbo on every Disney commercial when I was a child and still to this very day, the attraction is inviting families to ride an actual flying elephant that soars in the air, no magic feather needed. If this isn’t Disney magic, I don’t know what is!

The nostalgic dumbo ride at Disney Parks is one ride everyone young and old needs to experience, so let’s dive in as we share the history and details of this classic attraction.

When did the original Dumbo the Flying Elephant ride open at Disneyland?

Dumbo, the flying elephant attraction, opened on August 16, 1955. It was actually intended to open during the grand opening of Disneyland on July 17, 1955, but due to its improper prototypes, it was delayed.

The inspiration of the 10 ride vehicles not only had Dumbo as the star of the show but included the intoxicated pink elephants, which Disney kiboshed this idea as they did not want a family-friendly ride based on an alcoholic hallucination.

What changes have been made to Dumbo the Flying Elephant ride since its opening?

For two years, the hub of the ride was lackluster and did not include the circus ball with the Timothy Mouse figure.

Did you know that back when this ride was first made, Dumbo’s ears were meant to actually flap up and down while riding. Unfortunately, the hinged ears were unable to fly due to mechanical reasons and were removed along with changing Dumbo’s eyes from its big black pupils to his former blue-iris design.

In 1978, the color of the elephants’ clothing was redesigned to a matching pale three-color pattern. Not long after in 1983, and as part of the remodeling of Fantasyland, the ride was moved to where Skull Rock used to be. Dumbo carousels were reinvented with a kinetic toy maker-like design.

In 1990, the dumbo attraction was again changed now showcasing 16 rainbow-colored vehicles and Timothy holding the magic feather instead of the whip. All the elephant’s clothing was changed once again to bright 8 colored rainbow patterns.

What type of ride is Dumbo the Flying Elephant?

Dumbo the Flying Elephant is an aerial carousel-style ride that rotates counterclockwise, Guests can adjust the altitude, moving Dumbo up and down, much like the Aladdin Magic Carpets ride in Adventureland.

Dumbo the Flying Elephant at the Magic Kingdom

How long is Dumbo the Flying Elephant ride at the Magic Kingdom?

Although it may not feel like it while riding, this Disney ride only lasts for 1.5 minutes. Many Disney fans will attest that Dumbo is the perfect ride for babies and young ones who are first-timers to Disney attractions.

How long are the lines for the Dumbo the Flying Elephant ride?

Depending on peak seasons, the average wait times in the queue for Dumbo are 30 min or less.

One good thing about this attraction in this specific theme park (Magic Kingdom at Walt Disney World) is that it offers a Dumbo waiting area with interactive elements for kids to enjoy! Parents will receive a ticket-themed pager and wait to be called next while children play around Dumbo’s fire rescue stunt scene inspired by the film and encased around a circus tent.

Where can you find Dumbo the Flying Elephant in the Magic Kingdom?

In 2011, Magic Kingdom Park, specifically Fantasyland, went through an entire expansion. The New Fantasyland created a whole new experience specifically made for young children called Storybook Circus. This area became Dumbo’s home, alongside The Barnstormer and across from Big Top Souvenirs.

This Magic Kingdom ride received the water features that have been seen in other Dumbo rides around the world. However, unlike the other versions, this ride allows Guests to enjoy the water feature at night, with gorgeous fountain lights changing colors, an effect that was inspired from the Disneyland version but with more vibrant colors. Another Dumbo vehicle was installed and now spins clockwise from the original version, that soft-opened on June 22, 2012.

Dumbo the Flying Elephant at Disneyland

How does weather affect Dumbo the Flying Elephant ride?

Be sure to note that while this ride is outdoors, it may temporarily close due to inclement weather conditions. In California, specifically, Anaheim can experience rain during the winter and even the spring season, so be aware before heading to this Disneyland attraction that if it is raining heavily, it may have to temporarily close.

Also to note, Dumbo the Flying Elephant may close at night due to fireworks performances at Disneyland Park, since the attraction is located behind the castle.

How long does the Dumbo the Flying Elephant ride last at Disneyland?

Dumbo is considered a slow and spinning ride that lasts 1 minute 30 seconds in this Disney Park. One of the best points to this attraction is there is no height requirement, so anyone in your group is welcome to ride. Dumbo is located just behind King Arthur Carrousel in Fantasyland.

What changes have been made to the queue for Dumbo the Flying Elephant at Disneyland?

Since 2018, the queue of the dumbo flying elephant attraction in Disneyland allows Guests to be covered with new shade coverings and a huge expansion was placed with wheelchair accessibility.

Riders are also now assigned to their Dumbo ride vehicle, which makes for a smoother transition.

Where can you find Dumbo the Flying Elephant in Shanghai Disneyland?

If you’re heading to Shanghai Disneyland soon, be aware that this attraction is not where you’d think it would be. This is the only Park that did not place the Dumbo attraction in Fantasyland!

Be sure to look around Gardens Of Imagination, which is located in the hub of the Park and has amazing views of the Enchanted Storybook Castle while soaring in the air!

When did Disneyland Park in Paris introduce Dumbo the Flying Elephant?

On April 12, 1992, Dumbo opened at Disneyland Paris. The Dumbo elephants that Guests ride on here are actually the second set built for Paris. Located in Fantasyland, Disneyland Paris’s Dumbo sits atop a grand platform showcasing the beauty of green topiaries and clean waterfalls.

Where is Dumbo the Flying Elephant in Tokyo Disneyland?

Right behind Cinderella Castle in Tokyo Disneyland, is Fantasyland, home of many iconic rides such as Alice’s Tea Cups, “it’s a small world”, and of course Dumbo The Flying Elephant.

For nostalgic Guests who visit Walt Disney World, a replica of Magic Kingdom’s 1971 version currently sits at Tokyo Disneyland, being the only Park to still showcase 10 flying elephants and Timothy standing tall on a disco ball holding a whip.

Where can you find Dumbo in Hong Kong Disneyland?

As a jovial organ melody begins to play, Dumbo gracefully lifts off from the ground and magically begins to fly round and round above a dancing water fountain. Feel the wind race across your face as faithful friend Timothy Q. Mouse—resting on a decorative hot-air balloon in the center of what looks to be a vintage circus-themed toy—directs the action with help from his “magic” feather.

If you’re planning on visiting any of these Disney parks soon, be sure to take your entire family to this iconic Disney attraction. This may not be the most thrilling, but I can guarantee this ride will give you the best views of the park! Not to mention a relaxing and heartwarming moment you will ever experience with your family.

Our friends at Academy Travel are Disney professionals and are EarMarked Diamond! Let them help you plan your next Disney adventure and offer a free quote.

Have you been on Dumbo The Flying Elephant attraction? Do you think it’s worth the hype? Which Disney theme park holds your favorite Dumbo ride? Let us know your thoughts in the comments below!

Comments Off on Dumbo the Flying Elephant Across Disney’s Parks!