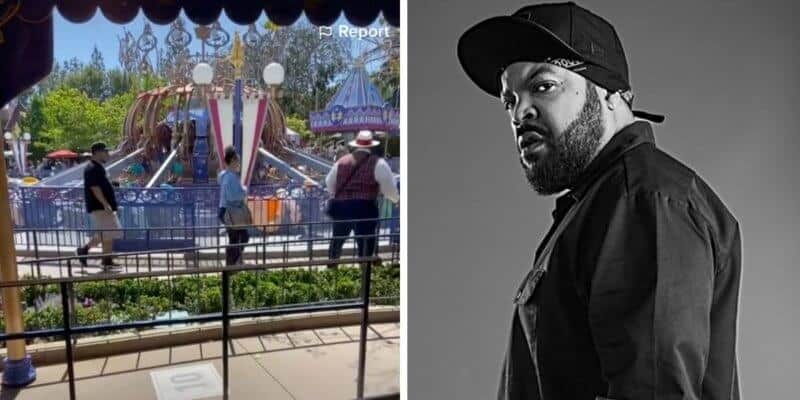 Seeing a celebrity at a Disney Park is always a huge bonus for any Guest, as you not only get the magic of Disney but get to see a Hollywood star!

Now that Disneyland has reopened, we have started to see many celebrities make their way to the Most Magical Place on Earth. From Disney stars Aly & Aj to the Kardashians to Megan Fox, it looks like many celebrities love Disney just as much as any of us.

Rap legend Ice Cube recently took a trip to Disneyland and took a ride on Dumbo the Flying Elephant. TikToker Liz (@
lusciousliz83) took a video of Ice boarding the attraction!

Best day I’ve ever had at Disneyland ??? got to see Ice Cube and let him know I ?him

Best day I’ve ever had at Disneyland ??? got to see Ice Cube and let him know I ?him ??? #fyp #icecube #celebrity #friday #disneyland

Although Ice Cube may seem like a tough exterior, the rapper is a huge Disney fan! In 2016, The Hollywood Reporter even announced that Ice would be teaming up with Disney to make a modern-day Oliver Twist movie that followed in the style of Broadway and Disney+ hit Hamilton.

Disney Studios is teaming with Ice Cube and Thomas Kail, the Tony-winning director of Hamilton, for a modern and musical take on Charles Dickens’ Oliver Twist.

We have not yet heard much about the project; however, we can clearly see that Ice Cube and Disney have a positive relationship.

Stay tuned to Inside the Magic as we continue to give you all the latest celebrity news from inside the Disney Parks!

Have you ever seen a celebrity when visiting Disneyland, Disney World, or any Disney Park across the globe? Let us know your story in the comments below.

If you want to be like Ice Cube and ride Dumbo the Flying Elephant in Disneyland, you can! Now that out-of-state visitors are allowed in the park, all Guests are welcome! Click here to get started today!