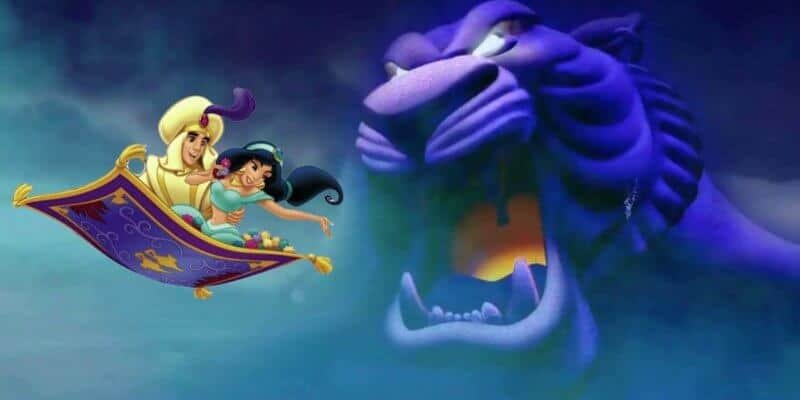 The Disney Parks are filled with a variety of attractions, all with their own unique theming. There are iconic rides such as “it’s a small world” and Jungle Cruise while also several rides based on Disney movies, such as Peter Pan’s Flight and The Many Adventures of Winnie the Pooh.

But, did Disney miss an opportunity when building The Magic Carpets of Aladdin inside Magic Kingdom at Disney World? What if instead, the theme park built a dark ride themed to the animated Aladdin (1992)?

Well, one Reddit user, Rich T., took to the platform to share some incredible ideas of how Disney could have made an Aladdin-themed dark ride. The post started off by stating:

Disney fan, Rich, then went into details on how Aladdin could have been an opening day attraction at Disneyland in 1955. He vividly described how the ride, which is titled Aladdin’s Arabian Frights, would begin in the Cave of Wonders where Guests enter through the tiger’s mouth. Abu, of course, steals the gem, and treasure and rock piles begin to fall — Just like in the animated movie.

Then, Guests would venture into other familiar scenes including the marketplace, Jafar’s lair, and the palace:

– MARKETPLACE: Guards lunge out from behind market stalls. A dark alley leads to…

– JAFAR’S LAIR: Jafar cackles, holding the genie lamp. The eyes in his snake staff light up as vehicle escapes into…

– TRANSFORMED PALACE: As pillars crack and totter, Snake Jafar approaches from the end of a palace corridor. You turn a corner to find Jasmine imprisoned in the big hourglass. You enter a pitch dark room where many giant hourglasses fall and spin. You turn one final corner…

The Reddit user then went into detail on how if Disney decided to possibly reimagine the original version a few years later. He explained that the ride would look similar to the 1955 version, as Guests still begin in the Cave of Wonders, but elements throughout would be slightly modified:

– CAVE OF WONDERS: Entering though a sculpted stone tiger’s mouth, vehicles find a beautiful cave of treasures. One pile of treasure, with Abu on top, totters a bit. You pass a scene of Aladdin meeting Genie.

– MARKETPLACE: You see Aladdin arrive as Prince Ali in a scaled-down parade scene. Jasmine, the Sultan and Raja watch from palace balcony. A dark alley leads to…

– TRANSFORMED PALACE: Genie covers his eyes and Jasmine shields her father as Aladdin faces Giant Snake Jafar. Snake bellows, “I WISH TO BE A GENIE!!!” Turn corner to see spinning sculpt of Genie Jafar being pulled into lamp (“Noooooooo!!!)

And, lastly, if Disney decided to build an Aladdin-themed dark ride today, in 2021, here is what Rich envisions it to look like:

– CAVE OF WONDERS: Aladdin is sitting on a big diamond and singing “There’s so much more to meeeeeeeee” while Abu holds up the lamp.

– FRIEND LIKE ME: An awkward attempt to recreate the musical number using a not-great-looking AA genie surrounded by projections lifted straight from the movie.

– MARKETPLACE: A small crowd of guards and merchants watch a film clip of the Prince Ali parade.

– JAFAR’S LAIR: Same as before, but more brightly lit and less threatening.

– HAPPY ENDING (?) PART TWO: On your left, Jasmine waves goodbye to Aladdin (on your right) as he waves back to her while leaving aboard magic carpet. The End.

Other Reddit users love how in-depth Rich went in describing this “should-be” dark ride, including user mandstaft who said, “So great! I’d love this dark ride!” and user 180º who expressed, “This post is so vivid and dead-on that I no longer live in a world where this isn’t actually Disneyland history. I can’t believe they ruined the Aladdin ride like that. Bring back Aladdin’s Arabian Adventures, Disney.”

Personally, I have always wanted to see Disney create a dark ride based on Aladdin, and now reading Rich’s ideas, I am even more convinced that we need this to become reality!

Would you like to see Disney build a dark ride themed to Aladdin? Let us know in the comments below.