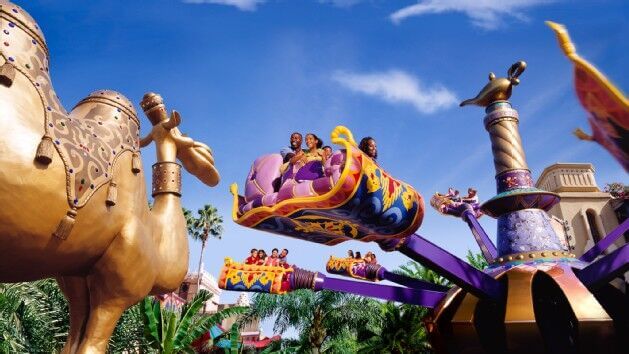 If you have been to Disney World during the pandemic, you may notice that although the parks are still just as magical, a few things are missing.

Character meet and greets are now socially distanced interactions, parades are now cavalcades, and entertainment has been suspended for some time. But aside from all of that, there is one offering that continues to remain missing at Disney World, and it could be the biggest loss of all.

When Guests enter Adventureland and seek out a ride on The Magic Carpets of Aladdin, they first must come face to face with a spitting camel. The camel that stands in front of the attraction shoots water out of its mouth onto unsuspecting Guests, much like Stitch in front of the World of Disney store in Disney Springs. There is another camel that spits on Guests while they are riding the attraction (as seen in the image below), but the camel outside the attraction is not currently spitting on those who walk by.

The camel outside the attraction hasn’t been spitting for quite some time, and now, Guests meandering through Adventureland no longer have to fear the spitting camel. However, is that really what we wanted? Now, a Disney Imagineer is speaking out and calling on Disney to “turn on the spit!”

Reporter Alicia Stella (@AliciaStella) took to Twitter to showcase that the camel in front of the Magic Kingdom attraction was not operating as usual.

Hey hey! That's my work and camel spitting was half the fun of the ride. Turn on the spit!

As you can see above, Disney Imagineer of 33 years Jim Shull (@JimShull) responded to the Tweet stating:

Hey hey! That’s my work and camel spitting was half the fun of the ride. Turn on the spit!

Shull worked on The Magic Carpets of Aladdin, as well as Phantom Manor (Disneyland Paris’s version of The Haunted Mansion), attractions at Disneyland Resort, Shanghai Disneyland, and more. Before all that, Shull had his hand in at Marvel Studios — so he truly has worked on so many aspects that help make and keep Disney magical from the screen to the parks.

Related: Joe Rohde Speaks on His 40 Year Career With Disney

Having Shull reply, telling Disney to “turn on the spit” is pretty hilarious — it seems like he doesn’t want Disney to mess with one of his creations! Of course, this is all in good fun, but considering Imagineers create attractions, resorts, and more with every detail in mind, I would definitely understand why someone like Shull could be annoyed if not all aspects of their design were running as planned.

In case you have never flown on your very own Magic Carpet, let us describe the ride to you, with the magical help of the Disney World website:

A New Fantastic Point of View
Climb aboard a colorful, 4-passenger flying “rug” and take off into the air to the soothing sounds of Middle Eastern music. Soar around a giant genie bottle and magic lamp and enjoy a new view of the colorful bazaar below.

Command Your Carpet
If you’re seated in the front row, you can direct how high or low you fly by moving an onboard lever up or down. If you’re sitting in the back row, pressing a magic scarab will tip your flying carpet forward or backward.

Would you like to see the spitting camel return to the attraction? Or do you not like unsuspecting spit being hurled your way?