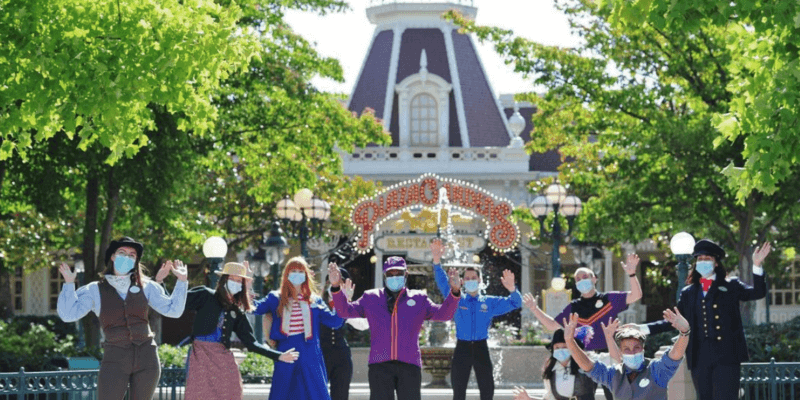 Disneyland Paris was finally able to reopen on June 17 after being closed for a second time since October 2020 — and visitors were quick to visit the Parisian theme park. Among those visitors were some notable celebrities from the Marvel Cinematic Universe.

Twitter user Eric Disney Lifestyle (@ericxdisney) to share a video of the masked-up Chris Evans was enjoying his time in Disneyland Paris. The Captain America star is a self-proclaimed Disney fan and has been spotted at a number of Disney theme parks through the years.

Evans was not the only Marvel star who had ventured across the Atlantic to visit the newly reopened theme park. Director Joe Russo shared some photos of his fun-filled family vacation on social media as well.

Thank you so much to @DisneylandParis for hosting my family and I today. It was such a wonderful experience. I’ve been taking my kids to Disney parks for 23 years and Paris was the last park to cross off our list. It did not disappoint!

Thank you so much to @DisneylandParis for hosting my family and I today. It was such a wonderful experience. I’ve been taking my kids to Disney parks for 23 years and Paris was the last park to cross off our list. It did not disappoint! pic.twitter.com/vvTiTR8maT

A new hotel is scheduled to open at Disneyland Paris and it could possibly be the reason Evans and Russo were in the area. Disney’s Hotel New York – The Art of Marvel will be opening at Disneyland on June 21 and will celebrate Marvel art from its earliest beginnings until now.

Disney’s Hotel New York – The Art of Marvel is the first of its kind in paying tribute to the artwork of Marvel. It will also be home to the largest collection of Marvel artwork in the world. Disney Parks Blog shared more information on the exciting and gorgeous hotel.

The hotel experience will take immersive storytelling to heroic heights! Guests can stand alongside a friendly neighborhood favorite for a selfie with Spider-Man at the Heroic Selfie Spot at the Super Hero Station, where there will be photo ops aplenty. Aspiring comic book artists can sharpen their skills at the Marvel Design Studio, while sports enthusiasts can power up at the fitness center, indoor and outdoor Metro Pool, and Hero Training Zone, an outdoor field with dedicated areas for a variety of sports activities for guests of all ages.

The hotel 471 Superior Rooms and 90 suites — 25 of which are dedicated to Spider-Man.

Again, it is not confirmed whether stars in the Marvel Cinematic Universe will be in attendance for the hotel’s grand opening, but the Marvel celebrity sightings at Disneyland Paris could point in that direction.

Have you ever had a celebrity sighting at a Disney Park? Let us know in the comments!

Want to book your own magical Disney vacation? Let our friends at Academy Travel take all the stress out of booking! Click here to get started today!