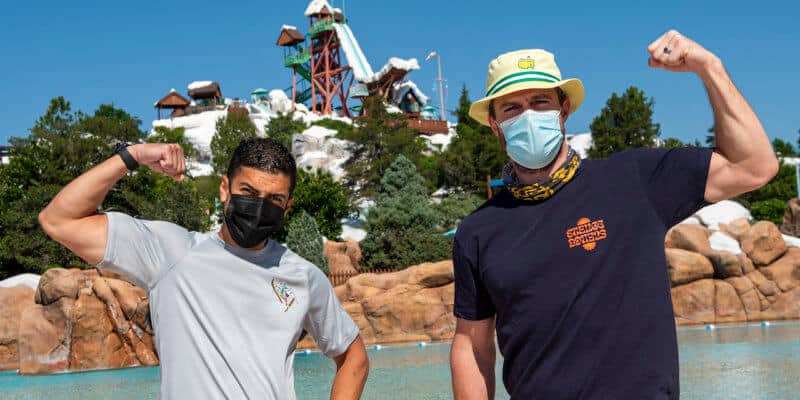 Actors Stephen Amell and Rick Gonzalez recently cooled off at Disney’s Blizzard Beach where they talked all things Disney.

Disney Parks Blog caught up with the two actors, who played superheroes in CW’s Arrow, where they discussed topics from Disney villains to the most challenging stunts they’ve performed to which character they would love to play in a live-action Disney film!

Related: Did You Know Wayne Brady Was Fired From Disney World?

Here is your chance to get to know actors Stephen Amell and Rick Gonzalez like never before! While they were relaxing in one of the Polar Patios at Disney’s Blizzard Beach water park, we caught up with the TV stars for a dynamic round of rapid-fire questions.

During their recent vacation at Walt Disney World Resort, Stephen and Rick took a break from the park’s thrilling water attractions to reveal which Disney character they would play in a live-action remake, the most challenging stunts they’ve performed and so much more. Watch the video below to discover what these onscreen stars and real-life friends had to say!

We are loving the answers that these actors provided. My personal favorite is when the two were asked “What Disney villain do you think would be the toughest for the superheroes you played to take down?”. Amell answered with the iconic Maleficent while Gonzalez shouted out an answer that I think took everyone by surprise — “Goofy”, Gonzalez said.

Stephen Amell also recently took to Instagram to share of photo of him and his wife on Buzz Lightyear’s Space Ranger Spin in Magic Kingdom, writing:

My wife destroyed me on this ride. She has better aim than me. Which is difficult for someone who played the greatest fictional archer of all time to admit. Thanks @waltdisneyworld

The actor also posted a photo of his beautiful family, including his daughter who dressed as Mulan for the day, writing:

Rick Gonzalez also shared this beautiful photo to his Instagram account two weeks ago, which shows off his family alongside Amell’s family, writing:

It is clear that the Arrow actors are a huge Disney Parks fans. We can’t wait to see what else the two will be up to while visiting the Most Magical Place on Earth.

In case you aren’t familiar, both Stephen Amell and Rick Gonzalez starred in CW’s Arrow, which Netflix describes as:

Based on DC Comics’ Green Arrow, an affluent playboy becomes a vengeful superhero, saving the city from villains armed with just a bow and arrows.

Blizzard Beach recently reopened since being temporarily closed for several months due to the ongoing pandemic. The backstory of Blizzard Beach is that a one-time ski resort melted away into a watery wonderland — now, it is known as Blizzard Beach!

You and your family can discover frosty fun while visiting this ice-filled water park located at Walt Disney World. Disney’s Blizzard Beach is filled with one-of-a-kind and unique attractions, fun for all ages. From the relaxing lazy river — Cross Country Creek — to the iconic Summit Plummet, there are a wide variety of experiences for everyone.

Have you ever spotted a celebrity at Disney World? Let us know in the comments below.

If you want to visit Walt Disney World on your next family vacation, but aren’t sure where to begin planning then don’t hesitate to contact our friends over at Academy Travel. They will be with you every step of the way! Get your free quote today.

Comments Off on Actors Stephen Amell and Rick Gonzalez Spill on All-Things Disney!