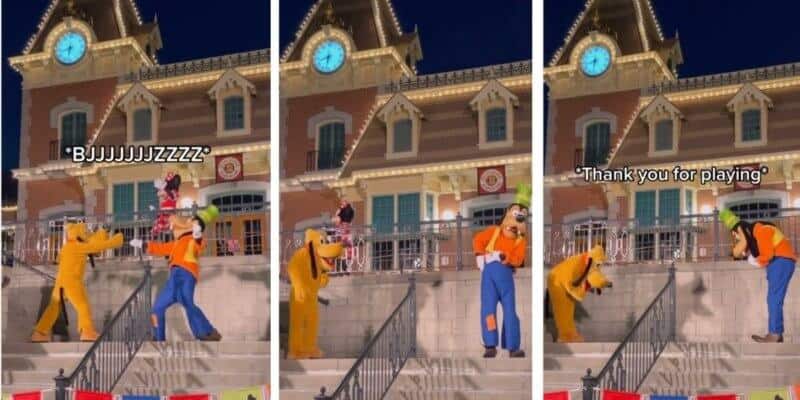 When visiting the Disney Parks, some of the best memories are often constructed from the characters Guests get to meet while visiting.

Being able to see your favorite Disney character come to life at Disneyland, Disney World, or any Disney Park is often so fun. At times, you may even get to see a unique interaction that does not often create a magical moment for Guests.

At times, those special interactions can happen between a character and a Guest. I am sure many Inside the Magic readers can recall a character meet and greet that has stuck in their memory for years. More recently, as meet and greets have become socially distant interactions, watching the characters interact with each other has been a highlight for many Guests, as we can see them play around with each other more so than they have in the past.

Alodie (@mandalodien) took to Instagram to show off this adorable lightsaber battle between two Star Wars fans — Pluto and Goofy! The battle took place at Disneyland on the steps of the train station, with Minnie Mouse watching from behind.

But who won tho?

The battle was mimed so well. It was clear that the characters orchestrated the battle with choreography to ensure they were moving in sync and that the battle looked great for all Guests watching. Considering Star Wars Galaxy’s Edge is in Disneyland Park, it makes total sense that Goofy and Pluto would know all about the world of Batuu, considering they are only a few steps away from the galaxy!

We have seen other adorable interactions, such as Pooh and Tigger frolicking through the EPCOT grass at Disney World, and if you are a Disneyland Guest, more times than not, you may see Peter Pan stirring up a little trouble with some of the other characters.

It should be noted that meet and greets are currently not being offered due to the ongoing pandemic at Disney World or Disneyland, but, Disneyland Paris has previously mentioned a possible reserved meet and greet system, which would work similarly to FastPass+. Although Disney has not noted if these new offerings will be coming to the Disney Parks within the U.S., it is a step in the right direction in terms of bringing back meet and greets. To read more about that, click here.

Tokyo Disneyland is already doing something similar with their app where Guests can submit an “Entry Request” on the Tokyo Disney Resort app to have a character meet and greet.

What is your favorite character interaction that you have either seen or experienced at a Disney Park?