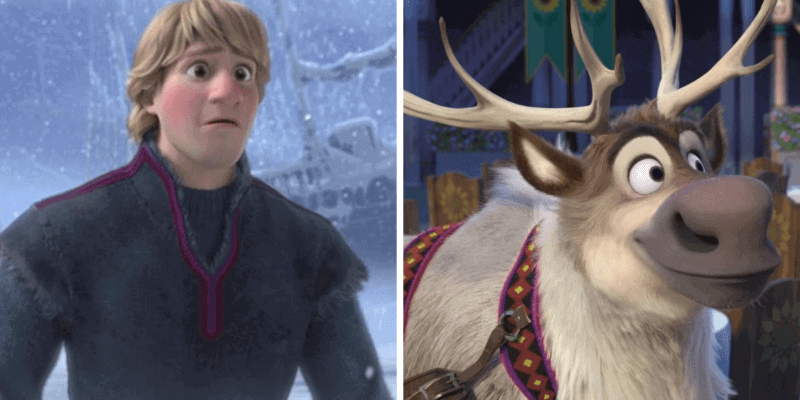 Do you wanna hear a super dark Disney theory? Careful, because this Frozen theory is not for the faint-hearted.

According to one Reddit user, lovable hero Kristoff may actually be wearing the skin of his best pal Sven’s mother!

Join us on a deep dive into this horrendous rabbit hole.

This theory comes from Reddit where user superclaude1 suggests that Kristoff (Jonathan Groff) is more like the villain who shot Bambi’s mom than he is a hero. In fact, it kind of puts all of Frozen (2013) and Frozen II (2019) in a new light.

The theory suggests that it was the ice harvesters who killed Sven’s mother. We know that both Kristoff and Sven were with these workers of Arendelle at the beginning of the film, so that checks out.

However, the theory takes an even darker turn as it suggests the reason for Kristoff and Sven’s bond. It’s because Sven can smell the scent of his deceased mother on his friend! Dude. This is getting too intense. Here is superclaude1’s first-hand take;

“In the context of the story, it all fits together … The ice harvesters must have killed Sven’s mother, leaving a baby Sven for Kristoff to look after, and giving him the pelt to wear. This explains why Sven is so close to Kristoff too, and why Kristoff still wears the same pelt. The smell reminds Sven of his mum.”

Frozen fans can rest easy, as, despite the evidence for the theory, this is incredibly unlikely to be true. Disney has “chilled” out a lot since the days of Bambi, and there’s no way that they’d include such a dark detail. Maybe Arendelle has a lucrative faux fur industry, and Kristoff isn’t wearing animal fur at all.

We can’t see Anna, Elsa, and Olaf hanging out with him if he was wearing his best friend’s mom as a winter coat! We can say pretty comfortably that this Frozen theory, is just a theory. However, it’s certainly a dark thought and puts one of the most beloved Disney animated classics in a new light!

Who are Sven and Kristoff, anyways?

Dark fan theory aside, Sven and Kristoff have become very popular Disney characters. Along with other Frozen favorites like Prince Hans, who may not actually be the villain! The Disney universe is full of nasty villains, but Hans might not actually be on the level of the evil Queen!

Regardless, fans fell in love with Sven and Kristoff; the iconic reindeer and ice harvester duo. The team became even more beloved with the release of 2019’s Frozen II, as their role expanded into helping Elsa and Anna through an enchanted forest into the land of Northuldra.

Indeed, the pair will always be remembered as the best of buds. As Kristoff himself says (or, sings); “reindeer are better than people!”

Ok, Kristoff. If this Frozen theory DOES turn about to be true, we’d like to know how you could wear your best pal’s mom!

What do you think of this crazy Frozen theory? Let us know in the comments below.