Check Out EPCOT's France Pavilion Expansion - Inside the Magic 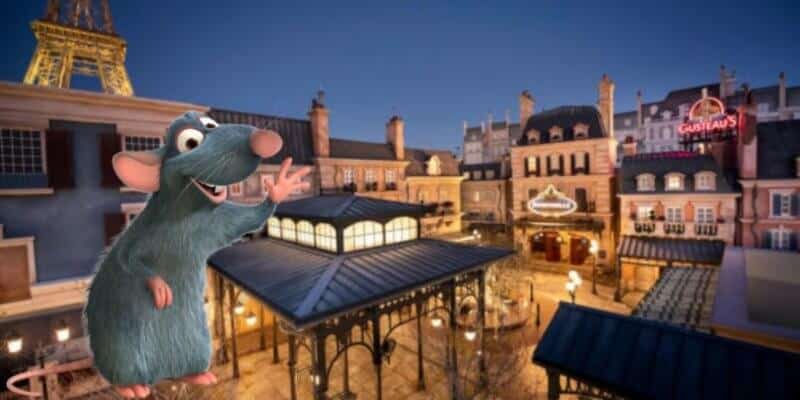 Ever since Disney announced all of the major changes coming to EPCOT at D23 in 2019, many Disney fans have been excited to see the finished product. Now, we are months away from seeing one of the biggest changes that the Walt Disney World Resort theme park had planned. The France pavilion expansion adds more beautiful detail and space to the park and attracts another food location.

Theming details for the France pavilion expansion at EPCOT

The theming in the France pavilion is stunning. The building has lovely architecture to show off as Guests walk through old Parisian streets to the beautiful florals and the eye-catching fountains; the pavilion transports Guests to another world.

At the moment, the pavilion has a heavy Beauty, and the Beast influence as Belle and Beast topiaries are added front and center during Flower and Garden Festival. The Beauty and the Beast Sing-A-Long is now available to Guests. However, as the expansion continues, it seems that Belle will have to share her space with a rat who loves to cook.

The France pavilion is the little details that really make the area feel like a European destination. There is so much going on from all of the food options such as Les Chefs de France, Monsieur Paul, Les Halles Boulangerie Patisserie, and L’Artisan des Glaces, plus two booths that serve delicious beverages, to the shops, and then the offering of both the Beauty and the Beast Sing-A-Long show as well as Impressions de France.

There is also French music being played as Guests walk along the cobblestoned floor, which separates it from the rest of the pavilion, and fun entertainers who, before the pandemic, would let Guests feel like they were watching incredible street performers.

It is one of the pavilions with the most to do. Now, with Remy’s Ratatouille Adventure being added, the pavilion will house an E-ticket attraction, making it more popular than ever.

What parts of the original portion of the France Pavilion are being updated?

The front of the France pavilion will continue to look as it always does, but behind it, a new courtyard is being added. In it, Guests will be able to enjoy new food and attractions, which we will go into further detail with, as well as allow Guests to enter Ratatouille.

With Gusteau’s Parisian restaurant now created, Guests can feel like they are about to visit an excellent restaurant where their meal will be prepared by a chef, pulling them deeper into the film!

What attractions will be a part of the France Pavilion expansion at EPCOT?

As we mentioned, Remy’s Ratatouille Adventure will be opening as a huge part of the expansion. Coming from Disneyland Paris’s version of the attraction, Ratatouille: The Adventure, this ride will allow Guests to go on a wild ride, as if they were the size of a rat, through Gusteau’s Parisian restaurant. The attraction is set to open on October 1, 2021, at the start of the 50th-anniversary celebration at Walt Disney World.

Pull your tails in and feast your senses on this brand new 4D experience at Disney Ratatouille. Remy and friends have cooked up a delicious storm. But it’s not long before they and you are discovered by Chef Skinner, who chases you through the sights, sounds and smells of Gusteau’s famous Parisian restaurant. New for 2014, this is a Disneylicious adventure that’s sure to leave you hungry for more.

What restaurants are planned for the France Pavilion expansion at EPCOT?

Although Guests will see a marquee for Gusteau’s Parisian restaurant, it is not a food location! However, there will be an all-new food option, on top of the huge variety that the pavilion already offers. La Crêperie de Paris will also be opening on October 1 as a quick-service restaurant.

The crêperie will feature the cuisine of celebrity chef Jérôme Bocuse, the son of Paul Bocuse and operator of the pavilion’s Chefs de France and Monsieur Paul restaurants. Enjoy sweet crepes as a new addition to Walt Disney World dining!

In the announcement for the restaurant, Disney stated:

And oh wait … there’s more! Also opening Oct. 1 will be La Crêperie de Paris, a new restaurant offering both table- and quick-service options. The menu will feature sweet crepes, savory buckwheat galettes (naturally gluten friendly) and authentic French hard cider. The attraction, restaurant and pavilion expansion are all part of the historic transformation of EPCOT currently underway, celebrating how the impossible becomes possible through the power of imagination … and a little Disney magic. This amazing time in the park’s history has already brought us a reimagined main entrance with new entrance fountain, “The Soul of Jazz: An American Adventure” exhibit and new films in three different pavilions, with much more on the way.

What shopping is planned for the France Pavilion expansion at EPCOT?

If there is one thing Disney World Guests can always count on, it’s that you can exit through a gift shop on almost all attractions. Although we do not know exactly what stores will be added to the expansion, a gift shop at the end of Remy’s Ratatouille Adventure would seem fitting. In Paris, there is a gift shop for the attraction, which could be a telling sign that Disney World may have one.

What is currently open in the France pavilion expansion at EPCOT

What parts of EPCOT’s France Pavilion expansion can you access?

Once the expansion is complete, Guests will be able to access the entire pavilion. At the moment, Guests can walk under the entryway of the expansion and see the lovely french detailing on the buildings, including the beautiful topiaries. That being said, the rest of the expansion will be boarded off by construction walls until October 1 rolls around.

When will EPCOT’s France Pavilion expansion be completed?

Lucky for all Guests visiting for the 50th anniversary celebrations on October 1, 2021, the France pavilion expansion is set to be completed by then and have its grand opening. Of course, things are always in flux when it comes to construction projects at Disney World; however, it has been announced that both the attraction and eatery will be open as of October 1.

Scheduled additions to the France pavilion expansion at EPCOT

How do you access the new parts of the France Pavilion expansion?

To access the new part of the France pavilion, you will need to enter the World Showcase at EPCOT! The quickest way to France will mean Guests should make a right when entering the Canada pavilion. After Canada, Guests will pass through the U.K. pavilion and then cross over a bridge to the France pavilion!

What parts of the France pavilion are still closed to the public?

The expansion is one of the only areas closed to the public when it comes to the France pavilion. Although Guests can enter the archway, construction walls are blocking off any of the actual additions. The best way to sneak a peek into the pavilion’s expansion is to ride Disney’s Skyliner, which passes over the top of the construction.

Due to the pandemic, Monsieur Paul has also remained closed, one of the original table service restaurants that the France pavilion offers.

When is Remy’s Ratatouille Adventure scheduled to open?

Remy’s Ratatouille Adventure had some speed bumps in its inception, as it was originally meant to debut during summer 2020; however, due to the pandemic, that date was pushed back.

Now, the attraction will officially open on October 1, 2021.

What characters will be featured in Remy’s Ratatouille Adventure?

Although the attraction is not yet open, if we compare Remy’s Ratatouille Adventure with Ratatouille: The Adventure in Disneyland Paris, we should expect to see Remy, Chef Gusteau, and Chef Skinner.

After queuing on the rooftops of Paris, guests board their “ratmobiles” and find themselves “shrunk” down to rat size on the roof of Gusteau’s restaurant, with Rémy and his imaginative Chef Gusteau trying to decide what meal they shall serve the riders. After deciding on their famous Ratatouille dish, Rémy and the riders fall through a swinging roof glass-pane, winding up on the restaurant kitchen floor. This starts a chase sequence with Rémy leading the riders and other rats away from the cooks, passing through the cold room and under the hot oven.

The little group eventually ends up in the dining area, attracting unwanted attention from customers and causing a riot. Chef Skinner tries to get rid of the rats and the guests, while Chef Linguini tries to help them escape into a nearby vent. The subsequent escape in the walls is undermined by Chef Skinner’s angry attempts to grab the rats or the guests through the venting grids. In the end, the little group makes it safely to Rémy’s kitchen, where the cooking of the Ratatouille is ongoing.

The ride ends at the Bistrot Chez Rémy restaurant, where guests are bid farewell by the rat colony (and the imaginary Gusteau) and invited to join in.

Check out this mini ride-through of Ratatouille: The Adventure in Paris posted by Disney!

What type of ride will Remy’s Ratatouille Adventure be?

Remy’s Ratatouille adventure will be a dark ride that will have real props and show scenes and utilize the use of screens at the same time. The attraction will also be trackless, much like we have experienced on Mickey and Minnie’s Runaway Railway.

Based on Disney and Pixar’s “Ratatouille,” this immersive experience “shrinks” you down to the size of “little chef” Remy and sends you scurrying through the kitchen of Gusteau’s restaurant.

In this new “Ride & Learn” video, you can virtually experience this 4D attraction and discover all sorts of fun facts – like the actual size of the giant fish you whiz by, or the names adorning some of the oversized bottles in Gusteau’s kitchen.

So, for now, we will need to keep counting down the days until October 1, where we can all enter the new France expansion at EPCOT!

What aspect of the new France expansion are you most excited to see? Let us know in the comments below!

Comments Off on Check Out EPCOT’s France Pavilion Expansion