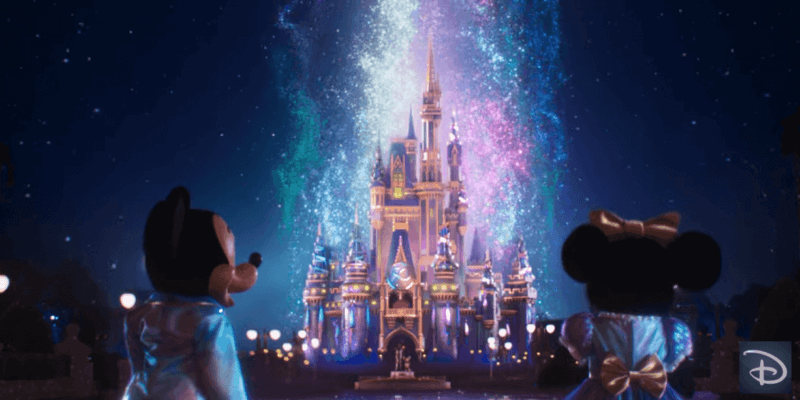 On October 1, 2021, Walt Disney World will be celebrating 50 years since Magic Kingdom first opened to the public in 1971. And now, Disney is getting fans excited by debuting a brand-new commercial showcasing the Disney magic that will be part of the 50th anniversary celebration.

The World’s Most Magical Celebration

Disney World has already announced they would be bringing a party to all of its Disney theme parks later this year — making this Walt Disney World’s biggest celebration yet! And to get Guests excited for the milestone, Disney has just released a new commercial that gives a first look at the 50th anniversary.

Within the commercial, you will spot several Easter eggs including Cinderella’s glass slipper, the Enchanted Rose from Beauty and the Beast, and more. These Easter eggs are showcased in a secret room tucked away in Cinderella Castle!

As we get ready for the 50th Anniversary of Walt Disney World Resort, we’re sharing a first look at a magical, new commercial that calls you to the upcoming celebration and features hidden Easter egg surprises for eagle-eyed Disney fans!

In the commercial, Disney magic lives in a secret room tucked away inside Cinderella Castle. There’s so much magic in this room, it can’t be contained and is ready to burst through! Along with an EARidescent magic-filled “50th Anniversary” cabinet, this special room also contains a variety of artifacts from beloved Disney stories, characters and attractions.

See if you can find Cinderella’s glass slipper, the Enchanted Rose from “Beauty and the Beast” and 16 other Easter eggs here:

More on the 50th Anniversary at Disney World

“The World’s Most Magical Celebration” will begin on October 1, 2021 and will bring all types of new decor and embellishments — Some of which we have already seen! The theme parks will bring in a brand-new look, which Disney is calling “EARidescence“.

Additionally, we know several different locations at Magic Kingdom are getting touch-ups for the celebration, including Prince Charming Regal Carousel, Dumbo the Flying Elephant, Peter Pan’s Flight, the Tangled restrooms, and more!

However, these 50th anniversary festivities won’t just be happening at Magic Kingdom — they will be happening at all four of the theme parks, including Magic Kingdom, EPCOT, Disney’s Hollywood Studios, and Disney’s Animal Kingdom. So, what this means is that no matter which park you visit at the Disney Resort, no matter which day you visit, you as a Disney World Guest will be celebrating Walt Disney World’s 50th anniversary!

And lastly, the best news of all is that this celebration isn’t just going to last one day, a few months, or even one full year — it’s going to be going on for a total of 18 months, into 2023!

Are you planning on visiting Disney World for the 50th anniversary? Let us know in the comments below.

If you want to book a vacation at Walt Disney World for the 50th anniversary, be sure to get in contact with our friends at Academy Travel. Get started here.