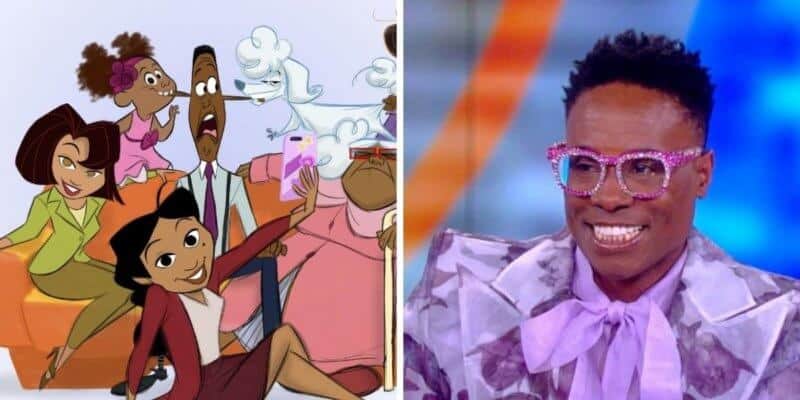 The Proud Family first aired on Disney Channel in 2001 and instantly became a fan-favorite as viewers followed 14-year-old Penny Proud.

The Proud Family: Louder and Prouder

We already knew that actress Keke Palmer will voice a new character for the show — a teen activist who goes by the name of Maya Leibowitz-Jenkins. Additionally, the creator of the original series, Bruce W. Smith, and executive producer, Ralph Farquhar, will return to develop the new episodes for The Proud Family: Louder and Prouder. Co-executive producer and story editor Calvin Brown Jr. will also join.

Now, we have more information surrounding The Proud Family: Louder and Prouder — Billy Porter (Pose), Zachary Quinto (Star Trek), and EJ Johnson (Rich Kids of Beverly Hills) have all been confirmed to join the series as brand-new characters.

“The Proud Family: Louder and Prouder” will pick up the story of its central character Penny Proud and also include her madcap family: parents Oscar and Trudy, twin siblings BeBe and CeCe, and her grandmother Suga Mama (and Puff!). Of course, it would not be “The Proud Family” without Penny’s loyal crew Dijonay Jones, LaCienega Boulevardez and Zoey Howzer, among others.

Currently in production at Disney Television Animation for a 2022 launch on Disney+, “The Proud Family: Louder and Prouder” is executive-produced by Bruce W. Smith (“The Princess and the Frog”) and Ralph Farquhar (“Moesha”), both of whom led the original series. Calvin Brown, Jr. (“Moesha”) is co-executive producer and story editor, Jan Hirota (“Big Hero 6 The Series”) is producer, and Eastwood Wong (“Carmen Sandiego”) is art director.

All previous seasons of “The Proud Family” are currently available on Disney+.

More on The Proud Family

The original show, The Proud Family, followed 14-year-old Penny Proud. Penny was trying to find her place in the world as well as her independence from her parents as she grew up.

Follow the adventures and misadventures of Penny, a typical African American girl who’s doing her best to navigate through the early years of teen-dom. Penny’s every encounter inevitably spirals into bigger-than-life situations filled with hi-jinks, hilarity and heart.

The series was so successful it led to a movie, titled The Proud Family Movie, which Disney describes as:

Penny Proud is almost 16 years old, but her dad, Oscar, still treats her like a child! Instead of celebrating her sweet 16th birthday with her friends, she has to go on a boring vacation to the tropical Legume Island with her family. But on it, the evil Dr. Carver hopes to take over the world.

You can enjoy original episodes from the Disney Channel series, available now on Disney+. If you are not yet signed up for Disney’s streaming service, you can subscribe here.

Are you excited for The Proud Family: Louder and Prouder? Let us know in the comments below.