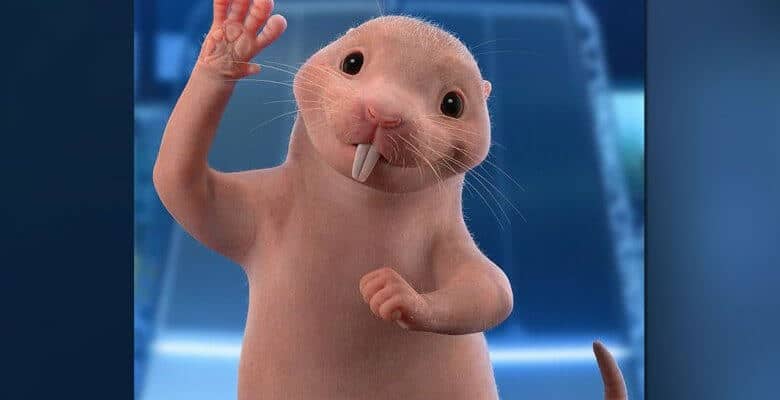 So what’s the sitch? If you’re anything like us, you’re head over heels excited for all of Disney’s remakes coming to the big and small screen in 2019. Disney Channel announced a live-action film version of the popular animated series “Kim Possible” last year. While we’re super pumped to see our favorite teenage heroes back in action, we’ve been wondering if one very important character is making an appearance in the new movie.

That’s right: the naked mole-rat Rufus is joining his BFF Ron Stoppable on screen this week. If you’re a fan of the original animated series, you’ll remember Rufus as Ron’s fun, sassy, spirited pet who is always by his side (or in his pocket). Disney just announced that with the power of CGI (and the voice talents of Nancy Cartwright, who voiced Rufus in the original series), Rufus is coming to life in the new film, alongside Kim (Sadie Stanley), Ron (Sean Giambrone), new friend Athena (Ciara Wilson), and tech wiz Wade (Isaac Ryan Brown).

D23 shared that Cartwright was hoping Disney Channel would give her a call to do the new film. The actress has a signature sound for Rufus that is made up of  “efforts and grunts, and squirts, gurgles, and squeaks.” We love that Disney is including stars of the past series in the new film, and we hope they continue to do so with other remakes releasing in the coming years.

Giambrone, who portrays Ron in the new film premiering this Friday, was thrilled when he saw the final result of Rufus on screen. The cast had to wait until they were finished filming to see how Rufus would turn out. “The first time I saw him [on film] it was like true love,” he said to D23. “I knew that was exactly what he should look like and it just felt like I was reunited with a buddy, seeing the movie with Rufus in it.”

Here’s a fun video of the Rufus Cam shared by Disney Channel as a sneak peek of the new film:

Tune in to Disney Channel this Friday, February 15, at 8 p.m. to watch Rufus come to life!

What Disney movie remake are you most excited to watch this year? Let us know in the comments!