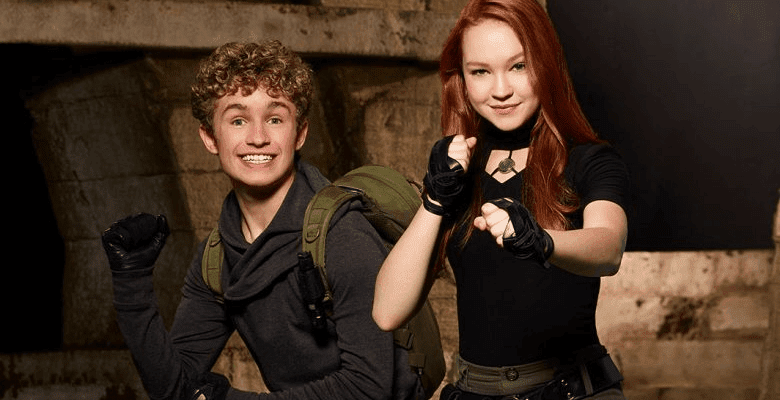 Call her, beep her, if you wanna reach her…because Kim Possible and Ron Stoppable are back in action on Disney Channel! Earlier this year, Disney announced their plans to bring back the dynamic duo in an all-new movie, and now, we’ve got all the details.

So what’s the sitch? Well, the live-action Disney Channel Original Movie based on the “Kim Possible” animated series will premiere on Disney Channel on February 15, 2019. The original show was a hit among Disney Channel fans, and by the looks of the new trailer, the live-action remake won’t disappoint. We love Disney’s trend of recreating our favorite movies and TV shows, from “Aladdin” to “Duck Tales,” so you bet we’re marking our calendars for the date Kim and Ron are fighting crime once again.

The new film stars newcomers Sadie Stanley as Kim and ABC’s “The Goldbergs” actor Sean Giambrone as Ron. This Disney Channel Original remake follows our favorite pair of best friends as they navigate the balance of starting high school, saving the world, and (naturally) battling Drakken and Shego, the epic villains from the original animated series. And fans of the show, this one’s for you: Christy Carlson Romano, the voice of the Kim Possible animated character, will make a cameo appearance in the DCOM. What could be better?

In the new trailer for the upcoming movie, Kim narrates that a few years ago, she accidentally received a distress call. “I was done with my homework so I answered it. Now, well, I save the world.” We can even hear the familiar beeping sound of Kim’s cell phone text alerts in the trailer. Booyah!

Take a look at the new trailer for the “Kim Possible” live-action remake below!

Here is the official synopsis for the upcoming Disney Channel Original Movie:

While saving the world may come naturally to Kim, she finds high school to be the ultimate challenge as she has to navigate an intimidating social hierarchy (not to mention confusing hallways!), make it to class on time, and face off against her frenemy, Bonnie, in soccer tryouts. Kim and Ron find a friend in Athena—a new classmate and Kim Possible super-fan who is having an even worse day than Kim is—who becomes the newest member of Team Possible… and even starts to eclipse Kim. But when the nefarious super villains Drakken and Shego resurface in Middleton determined to stop Kim, can Team Possible—which also features tech-genius Wade and a naked mole rat Ron meets along the way (Rufus!)—thwart them? You’ll have to tune in to find out.

Multitalented actress/singer Christy Carlson Romano, who voiced Kim Possible in the animated series, will make a cameo appearance in the DCOM, as will Emmy®- and Grammy®-winning actor/comedian Patton Oswalt, who reprises his role from the animated series, Professor Dementor.

Will you be tuning into the new live-action “Kim Possible” movie on Disney Channel on February 15?