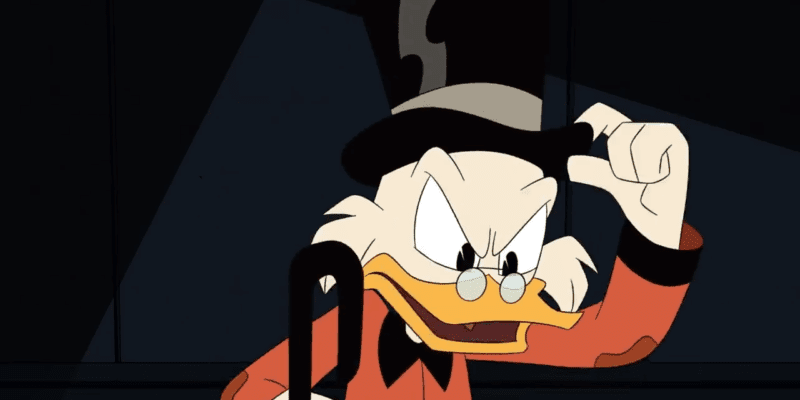 Scrooge McDuck, the miserly uncle of Donald Duck, Huey, Dewey, and Louie, really lives up to his namesake in this clip from the upcoming “DuckTales” holiday special.

Premiering on the Disney Channel on Saturday, December 1 at 7:30 AM EST, the special episode titled “Last Christmas!” sees Scrooge McDuck and his family go on a time-traveling adventure to Christmas parties past. Of course, much like Ebenezer Scrooge in “A Christmas Carol,” this Scrooge is not in a very jolly mood. He even utters the famous Scrooge catchphrase: “Bah! Humbug!” Take a peek at the episode in the clip below.

In a nod to “Mickey’s Christmas Carol,” Scrooge avoids the pressures of the holidays by traveling back in time with a trio of fun-loving ghosts to crash history’s greatest Christmas parties instead. Meanwhile, time-lost Dewey teams up with young Donald Duck to find his mom on Christmas. Jack McBrayer (“30 Rock”) guest stars as fun-loving ghost Past.

In “Mickey’s Christmas Carol,” Disney’s 1983 retelling of the classic holiday tale, Scrooge McDuck took on the role of Ebenezer Scrooge. Mickey Mouse played Bob Cratchit, with Goofy as Jacob Marley, Jiminy Cricket as the Ghost of Christmas Past, Mr. Toad as Fezziwig, and other Disney favorites filling out the cast.

The new “DuckTales” series, which kicked off in 2017, features the voices of David Tennant as Uncle Scrooge, Tony Anselmo as Donald Duck, Danny Pudi as Huey, Ben Schwartz as Dewey, Bobby Moynihan as Louie, Kate Micucci as Webby, Toks Olagundoye as Mrs. Beakley, and Beck Bennett as Launchpad McQuack.

Be sure to tune in to Disney Channel at 7:30 AM EST on Saturday, December 1 to see if Scrooge finally learns his lesson during the “DuckTales” holiday special.