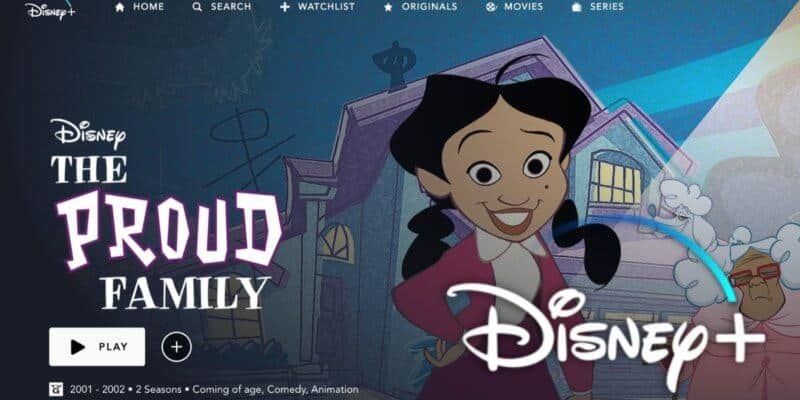 When Disney+ first launched, many subscribers noticed there was one show in particular that was missing from the streaming service’s library of content.

The Proud Family first aired on Disney Channel in 2001 and followed 14 year old Penny Proud. Penny was trying to find her place in the world as well as her independence from her parents as she grew up. The show was extremely popular, so it was extremely confusing to subscriber as to why it wasn’t available on the streaming service.

Well, it’s a new year and that means new content for Disney+, including The Proud Family! That’s right, the popular Disney Channel series is now available on Disney’s streaming service for your viewing pleasure.

This isn’t the only thing fans of The Proud Family should look forward to because back in November, we got confirmation that the series was returning with NEW episodes!

Jo Marie Payton appeared on an episode of Strahan, Sara, & Keke in November and gave fans a special announcement. Jo Marie Payton, who is known for voicing the iconic Suga Mama on The Proud Family, was asked by host Keke Palmer if she was anything like Suga Mama in real life, in which she replied “Yeah, Suga’s large and in charge, that’s all I’ve got to say. Except for Suga Mama will be doing some new episodes come February!”

Though we aren’t sure exactly when these new episodes will be coming to the streaming service, Jo Marie Payton mentioned February, so hopefully we will get an official announcement from Disney+ soon!

In the meantime, you can enjoy original episodes from the Disney Channel series, available now on Disney+.

If you are not yet signed up for Disney’s streaming service, you can subscribe here.

Are you excited to see The Proud Family available on Disney’s streaming service? Let us know in the comments.

Comments Off on CONFIRMED: “The Proud Family” Is Available NOW On Disney+