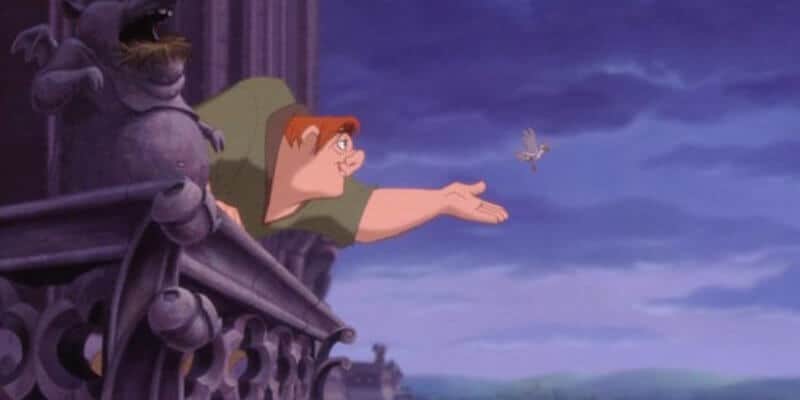 When Walt Disney Animation Studios’ The Hunchback of Notre Dame (1996) debuted, it introduced a new generation — who weren’t yet old enough to be taking high school literature classes — to Victor Hugo’s 1831 French Gothic novel of the same name.

The official Disney+ description of The Hunchback of Notre Dame reads:

Inspired by Victor Hugo’s classic novel, these are the adventures of Quasimodo, the gentle and lonely hunchbacked bell ringer of Notre Dame. At the urging of his gargoyle pals Victor, Hugo, and Laverne, Quasimodo leaves the solitary safety of his tower, venturing out and finding his first true friend, the gypsy beauty Esmeralda.

When Esmeralda is arrested and confined to the Cathedral, Quasi helps her escape, and she entrusts him with a secret map to the gypsies’ hideout. When the hideout is threatened, Quasi — the most unlikely of heroes — fights to save the people and the city he loves. They, in turn, learn to see people for who they are, rather than how they appear.

Tragically, in 2019, a horrible fire nearly destroyed the real Notre-Dame de Paris — and now, Disney fans and Francophiles alike can support the restoration of one of the world’s most historic Cathedrals by adopting a gargoyle.

Disney is reportedly working on a live-action remake of the animated film, but details have not been released, including whether or not Disney Legend Alan Menken will return to score the movie.

The organization Friends of Notre-Dame de Paris describes its mission as:

Our organization was established in 2017 to support the preservation of the Notre-Dame Cathedral. The cathedral was in desperate need of attention and infrastructure repairs, so we made it our mission to provide the support for this internationally beloved monument.

Our mission, however, changed in 2019 with the tragic fire that set the cathedral ablaze. We are now determined to restore, rebuild, and preserve the cathedral. And we would love your help.

On the Friends of Notre-Dame de Paris website, visitors can choose from a variety of works of art to sponsor. When you “adopt” one of these historic pieces, your funding will go toward its restoration and preservation.

Perhaps most exciting for Disney fans is the opportunity to “adopt” a gargoyle — described by the organization as “Grotesques”.

Fortunately, the restoration of the world-famous Catholic Cathedral is going well. In April 2021, French President Emmanuel Macron provided a statement on the ongoing construction work at the Parisian landmark:

“We’re seeing here how, in two years, a huge work has been accomplished,” Macron said, recalling the “emotion” throughout France at the images of flames devouring Notre Dame on April 15, 2019. “We also see what’s remain to be done.”

“I can say today that the cathedral is saved. It is well secured, and we can now do the huge work of reconstruction that is not going to destabilize the whole building.”

At this time, it seems the most challenging job is saving the Notre Dame Cathedral’s famous spire.

Again, visit the Friends of Notre-Dame de Paris website to adopt a gargoyle or sponsor another work of art.

Are you going to join the effort to save Quasimodo’s Notre Dame? Have you read the Victor Hugo novel Disney’s Hunchback animated film was inspired by?

Comments Off on Adopt a Gargoyle to Save Quasimodo’s Home