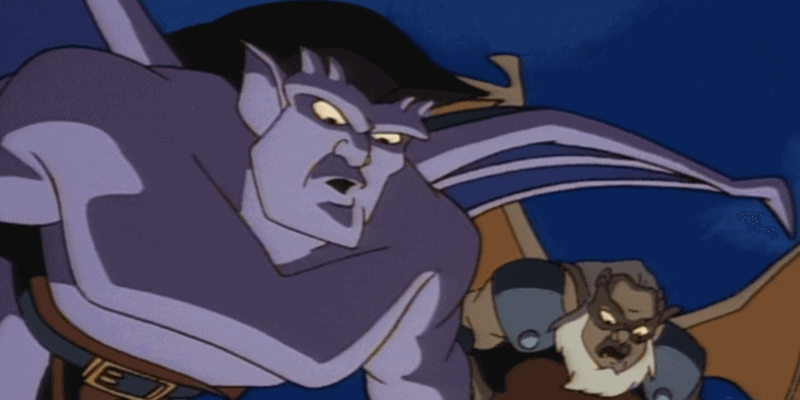 When you think of The Walt Disney Company, “family-friendly” might be one of the first phrases that leaps to mind. After all, Walt Disney wanted his films and theme parks to be things that parents and children could enjoy together. As it turns, out, though, there was at least one live-action Disney movie that almost changed this squeaky clean image — but, Disney’s Gargoyles was ultimately left on the cutting room floor.

Here, we dive into the history of this intense thriller.

The live-action Gargoyles film was, unsurprisingly, based on the Disney animated series that aired in the mid-1990s. The Gargoyles Fandom Wiki has provided the following description of the show, which still has a cult following today:

The series was known for its complex story arcs and drama, a prime example being the controversial first-season episode “Deadly Force,” which addressed the consequences of gun violence, including a graphic depiction of the wounds of a gunshot victim.

If you’re unfamiliar with the basic premise of the show, it featured stone gargoyle statues who found themselves coming to life on the roof gutter of a Gothic building. The series focused on a number of mythical creatures and lore from Medieval times, including King Arthur and his Knights of the Round Table.

The main character of the animated series was Goliath (Keith David) and, as Polygon shared, the character would have also appeared in the live-action film:

Todd Garner, then an executive at Disney’s more adult-skewering label Touchstone Pictures, and now the independent producer of such hits as the ultra-violent Mortal Kombat remake, wanted to convert the series into a live-action movie as early as 1995…Garner confirmed the timeline to Polygon.

Polygon’s report also noted that Disney was so serious about making this gritty movie that they brought in their go-to screenwriter, Jim Kouf — the creative mind behind movies like Stakeout, Disorganized Crime, Operation Dumbo Drop, Another Stakeout, the script that ultimately turned into Nicolas Cage’s National Treasure.

Polygon got a behind-the-scenes look at the script for the scrapped Gargoyles movie — at 127 pages, it was clearly not just a throwaway idea. They shared some details about the opening sequence:

The script begins, as so many fantasies do, with bold text: “AN ANCIENT TIME … A TIME OF MAGIC … A THOUSAND YEARS AGO.” Kouf introduces Goliath MacGrath, a warrior whose land is being threatened by an evil sorcerer named Morgan. Morgan is poised to open up a portal to hell, so Goliath visits a sorcerer, who promises to give him a much-needed supernatural upgrade, by transforming him and some other warriors into undefeatable creatures. “You must give up your flesh and blood and your heart will be turned to stone,” the sorcerer tells him. “But you will not be dead. You will be more powerful than a hundred men and be feared by all […] And looked upon as the devil himself.” So there’s a trade-off. Unwilling to return to his family in his monstrous form, the sorcerer repeats a refrain familiar to fans of the show: “Stone you will be and stone you shall remain … until such time as you have been raised above the clouds in the heavens.” It’s then that he can return to life, in gargoyle form. The gargoyles — along with Goliath there is Calum, Allig, Ruairidh, Tormod and Domhnall — defeat the evil Morgan and promptly turn into stone.

The film then, seemingly, would have taken viewers on a globe-trotting adventure from the rough streets of New York City to the “present day” in the South American nation of Chile. There, moviegoers would have met Alex Anderson, a relative of Goliath’s who was working as a miner. Ultimately, Anderson ends up back in Manhattan, where he teams up with the movie’s female lead, Detective Brenna, to investigate a ghoulish series of murders — including his father’s.

Polygon asserted that the movie could have been incredible, had it ever actually made it into production:

This is a script full of grand action set pieces, sly humor, and a nifty, Christmastime setting. There are also occasionally baffling creative decisions, like the fact that Goliath only speaks Gaelic and Alex only speaks English. With bursts of extreme violence, plus drinking, cursing (Alex calls Morgan an “ugly piece of shit from hell”), and smoking, Kouf packed his script full of things that are forbidden in most all-ages, four-quadrant Disney fare. “We weren’t doing it for kids,” Garner says. “We were trying to do what Marvel eventually ended up doing so well.”

Now, as Disney expands into more mature arenas, with both 20th Century Studios and Hulu now under The Walt Disney Company umbrella, could Goliath’s live-action adventures find a place in the Disney catalog?

Only time, of course, will tell, but I, for one, am already hooked on this murder mystery thriller with international intrigue.

What do you think? Do you hope a live-action Gargoyles movie eventually becomes reality?

For now, you can relive your childhood by streaming the entire Gargoyles animated series on Disney+ anytime.