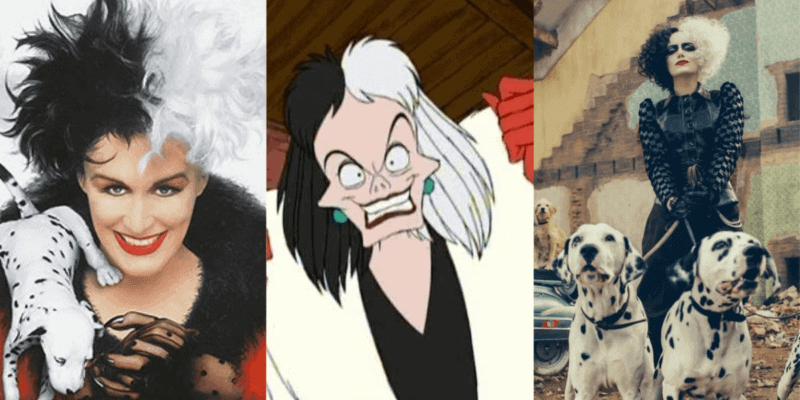 Emma Stone’s Cruella promises to tell a reimagined origin story of the Disney villain with, shall we say, a penchant for dalmatian puppies. Disney fans are eager to see Emma Stone as the latest actress to take on the iconic Cruella de Vil character in the upcoming film. Disney’s Cruella (2021) premieres on May 28, 2021, simultaneously in theaters and on Disney+for a “Premier Access” fee ($29.99 is the typical amount charged by the streaming service).

Several other actresses have taken on the role of Disney’s Cruella de Vil over the years in both animated and live-action incarnations. Let’s take a look at the history of 101 Dalmatians villain Cruella de Vil in Disney movies.

Actresses who have voiced animated versions of Cruella de Vil

Who voiced Cruella de Vil in the 1961 film One Hundred and One Dalmatians?

Who voiced Cruella de Vil in the animated TV series 101 Dalmatians: The Series?

April Winchell voiced Cruella de Vil in most episodes of 101 Dalmatians: The Series, which ran for 2 seasons from 1997-1998. Winchell is also known as the voice of Clarabelle Cow for Disney since 1996. Actress Tress MacNeille provided the voice of Cruella de Vil’s character in two episodes as well. The character’s depiction in the TV series is inspired by the design of Cruella in the original 1961 movie, but with a personality inspired more by Glenn Close’s portrayal in the live-action remake.

Susanne Blakeslee voiced Disney’s Cruella de Vil in 101 Dalmatians II: Patch’s London Adventure (2003), a direct sequel that features a story that takes place one year after the events of 101 Dalmatians (1961). The movie was distributed by Walt Disney Home Entertainment in a direct-to-video release and featured additional voice acting from Barry Bostwick, Jason Alexander, and Martin Short.

Who played Cruella de Vil in the 1996 live-action remake of 101 Dalmatians?

Glenn Close played Cruella de Vil in the live-action adaptation of  101 Dalmatians (1996) from Walt Disney Studios. While the live-action remake premiered to mostly mixed reviews, critics and Disney fans were captivated by Glenn Close’s performance as the legendary fur coat enthusiast. Desperately wanting an authentic spotted fur coat, Cruella would stop at nothing to get to the puppies of Pongo & Perdita (Perdy). The film also starred Jeff Daniels and Joely Richardson.

Glenn Close reprised her role of Cruella de Vil in Walt Disney Studios sequel 102 Dalmatians (2000). This time around Glenn Close portrays the character as reformed from her time in prison, and completely cured of her fur coat costumes fixation. As the film goes on, however, Cruella reverts to her role as a villain — played to the maniacal hilt by Glenn Close.

How did 101 Dalmatians do at the box office?

Disney’s 101 Dalmatians (1996) grossed more than $136 million domestically, and $320 million worldwide qualifying the film as a bonafide hit. Despite the mixed reviews from critics upon its release, Glenn Close’s performance and the box office success was enough to convince Walt Disney Studios to launch a follow-up.

Disney’s sequel 102 Dalmatians (2000), turned in a middling performance at the box office, taking in $67 million in the U.S., and $183 million worldwide. While not an outright bomb, the film brought in considerably less than its predecessor.

Who is playing Cruella de Vil in the upcoming Disney movie?

Oscar-winner Emma Stone is playing a young Cruella de Vil in the 101 Dalmatians live-action remake of the property that will be an origin story of sorts for the iconic villain. Glenn Close, who first brought the live-action Cruella to the big screen, will serve as executive producer of the film. The live action remake will share a reimagining of Cruella’s backstory, meant to give details of the character’s life prior to her epic attempt at dognapping the famous brood of dalmatian puppies.

Since the Cruella trailer was released back in February, fans have noted the film’s gritty undertones. Marketed as a villain origin story, fans have compared the film’s tone in the trailer to that of Joker (2019) starring Joaquin Phoenix as Arthur Fleck — a role that earned him the Best Actor Oscar. Craig Gillespie, director of Cruella, says the films share some similarities, but ultimately are quite different, stating to Total Film:

“There’s going to be a lot of fun, a lot of humor in it. There’s a lot of absolutely delightful banter and rhythm to the style of it, which is different from Joker.”

Emma Stone also commented on the film’s contrasts with Joker, while also praising the film’s star, saying of Cruella:

“It’s very different from Joker in many ways. I would never even remotely compare myself to [Joker actor, Joaquin Phoenix].”

Who else is confirmed to be part of the Cruella cast?

2-time Oscar winner Emma Thompson stars opposite Emma Stone as Cruella de Vil’s rival. Known simply as the Baroness, Thompson’s character, Baroness von Hellman is the toast of London’s fashionable elite, and a gatekeeper to Cruella’s designs on kicking in the door to high society on her own terms.

Other characters appearing in Cruella from Disney’s 101 Dalmatians include Cruella’s blundering lackeys, Jasper and Horace. The criminal duo will be played by Joel Fry (Game of Thrones) and Paul Walter Hauser (Cobra Kai).

When is Cruella set?

Even though the original 101 Dalmatians is based on Dodie Smith’s 1956 novel of the same name, this live-action remake reimagines Cruella’s origin story set in 1970s London. While not exactly a prequel, the movie explores the rise of young Cruella. The film’s trailer, as well as Disney’s official synopsis, features the influence of the 1970s punk rock aesthetic of the era.

From Disney’s official synopsis of Cruella (2021)

“Cruella,” which is set in 1970s London amidst the punk rock revolution, follows a young grifter named Estella, a clever and creative girl determined to make a name for herself with her designs. She befriends a pair of young thieves who appreciate her appetite for mischief, and together they are able to build a life for themselves on the London streets. One day, Estella’s flair for fashion catches the eye of the Baroness von Hellman, a fashion legend who is devastatingly chic and terrifyingly haute, played by two-time Oscar® winner Emma Thompson (“Howards End,” “Sense & Sensibility”). But their relationship sets in motion a course of events and revelations that will cause Estella to embrace her wicked side and become the raucous, fashionable and revenge-bent Cruella.”

What the actresses have said about playing Cruella de Vil

What has Glenn Close said about playing Cruella de Vil?

Glenn Close hasn’t donned Cruella’s signature two-tone hairdo since 102 Dalmatians in 2000 (well, not officially anyway), but she still has the dalmatian puppies obsessive on her mind. Speaking recently to Variety, Close teased a story idea for her version of Cruella to make an on-screen comeback for the fashion maven, saying:

““I have a great story to make another Cruella with my Cruella. Cruella comes to New York and disappears down the sewers.”

Glenn Close so enjoyed in the role of Cruella, that she had it written into her contract with Disney that she could keep Cruella’s elaborate over-the-top costumes after filming. She explained her affinity for the character in an interview with Variety, describing what it was like playing the iconic Disney villain, saying:

“I realized the meaner she was, the better she was. I loved that character.”

Betty Lou Gerson who voiced Cruella in the 1961 animated film 101 Dalmatians, said she had a sense that the Cruella de Vil character would become an iconic villain early on, recounting an experience to the LA Times:

“I got the general idea she was a kind of a cult figure when years ago I went to my manicurist. Her niece had an English boyfriend, and when he heard I was there, he came over to meet Cruella.”

Gerson who also narrated Disney’s Cinderella (1950), and appeared on screen in Mary Poppins (1964), said she came up with the chain-smoking character’s eccentric voice and unconventional accent by elaborating her own speech patterns, saying:

“The character has a real sweep to it, and I gave my own voice that sweep.”

How does Emma Stone feel about playing Cruella de Vil?

Emma Stone jumped at the opportunity to do a punk rock take on Walt Disney Studios’ legendary outlaw trendsetter. In a behind-the-scenes featurette, Emma Stone described what it felt like to step into the stylish shoes of Cruella de Vil.

“The character is so much fun and so kind of intoxicating. Once you put this wild black-and-white hair and this incredible makeup and these completely unique costumes on, you feel like Cruella de Vil.”

The latest trailer for Disney’s Cruella, shares more about the dynamic between Cruella and the Baroness (Emma Thompson), with the Baroness as the head of a fashion house that employs Cruella as an upstart designer in the fashion world. You can watch the latest trailer here and look for Cruella (2021) in theaters and on Disney+ (as a Primer Access title for $29.99) on May, 28th.
Are you excited to see Emma Stone’s Cruella? Let us know in the comments!