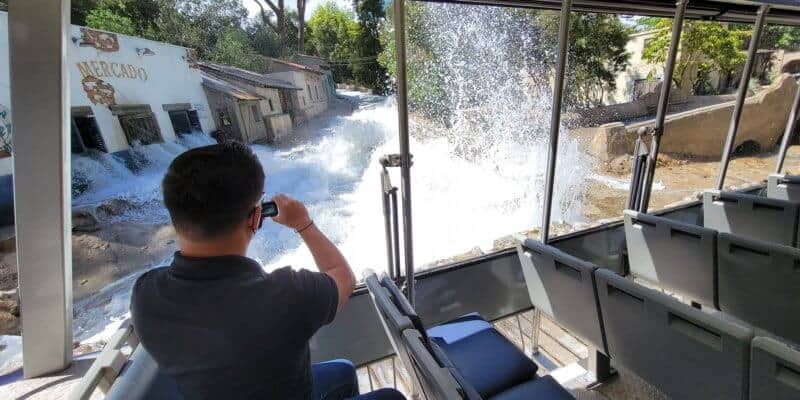 Now that Universal Studios Hollywood has finally opened up once again, Guests are now able to ride attractions and experience offerings that they have been missing for more than a year as a result of the theme park’s pandemic-related closure.

Whether you are looking forward to new attractions, such as the Secret Life of Pets ride, or the newly refurbished Jurassic World – The Ride, or you want to head on a classic fan-favorite, there is something for all Guests at Universal Hollywood. That being said, for some attractions, there is a right way to ride them, and a wrong way to ride.

The Universal Studio Tour is one of the most iconic attractions at Universal because it allows Guests to step into the movies and get a behind-the-scenes look at popular Universal production sets, which really immerses Guests into the “Hollywood” park. But, not all seats will give Guests the best view, and after waiting in line for an hour, getting a less than perfect view may not be what you were expecting.

Attractions 360 (@SoCal360) took to Twitter to share their secret on how to get the best Universal Studio Tour experience, and it all depends on which tram you are on:

For the BEST Studio tour experience at Universal Studios Hollywood, ride in Car # 3 of the tram. Car # 1 has the worst view of them all.

For the BEST Studio tour experience at Universal Studios Hollywood, ride in Car # 3 of the tram. Car # 1 has the worst view of them all. ???? @UniStudios pic.twitter.com/P1KrkRV6do

To prove their point, Attractions 360 followed up on their Tweet with a photo of the views from Tram 1, and as you can see, a lot of the attraction scenes end up getting missed, in comparison to the photo of the same flash flood moment that was taken from Tram 3:

This is the view of the Flash flood scene from Car 1. Can’t see it.

This is the view of the Flash flood scene from Car 1. Can't see it. pic.twitter.com/JlsJjflaOA

So, to ensure you have the best Studio Tour possible, when you are assigned a tram, be sure to request Tram 3 from a Team Member. You may need to step aside to wait for the spot to become available, but if you want the best views of the attraction, Tram 3 is clearly a must-do for this attraction.

We are only offering Studio Tours in English at this time. Spanish Studio Tour will reopen at a later date. Please check back soon for updates.

Sitting in the correct spot is something that does not apply to all rides, but some do rely on the positioning. Universal Studios Florida’s attraction, Fast & Furious: Supercharged, for example, takes place on a party bus and if you are not seated towards the outside of the vehicle, you will be looking over everyone else’s head!

Even Disney World has this problem. When riding Soarin’ at EPCOT, if you are not in the center row, you will likely be seeing what many Guests have deemed as a “drunk” Eiffel Tower, as the domed screen “curves” the structure’s appearance.

Is there another Universal or Disney ride that you have a specific seat selection that you like to pick when riding?

Click here to get started booking your Universal Studios vacation!