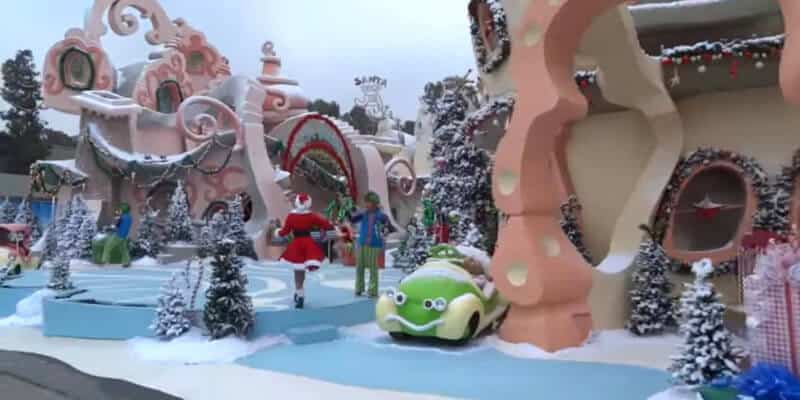 Now that the Southern California Universal theme park is reopening, Guests of Universal Studios Hollywood were able to take a ride on the Studio Backlot Tour this week and were given an up-close look at the area where Whoville once stood.

The Whoville set was made famous in the 2000 film How the Grinch Stole Christmas, starring Jim Carrey as the titular grumpy green guy. The Whoville set had been a staple of the Universal Studios Backlot Tour since the film’s release.

However, now, Whoville is no longer there. The video below shows the area as it stands now, documented by theme park reporter @thecalibae on Instagram:

Demolition of the Whoville area was first reported in April of 2020. However, the park was shut down due to the COVID-19 pandemic, so no Guests were around to see the area after the Grinch set was removed…until this week.

Before the demolition, Guests would be able to see the fun set before turning the corner to see the equally famous Bates Motel, owned by Norman Bates from the Alfred Hitchcock sensation Psycho.

The Whoville area was always exciting to see on the Studio Backlot Tour, but it was especially popular at Christmas when Guests would be able to see a special performance from citizens of Whoville, including the Grinch.

To get an idea of how Whoville once looked on the Universal Studios Hollywood Backlot Tour, you can watch our video of the special Christmas performance below. Note that this performance did not occur year-round, but the Whoville area of the backlot was visible during the tour every day.

Hopefully, Guests will still be able to see the Grinch, his adorable dog Max and the Whos when Christmas comes to Universal Studios Hollywood. Traditionally, the park does what they call Grinchmas, with character greetings, special performances, and an incredible tree lighting in Universal Plaza.

Universal Studios has not confirmed whether this event will take place. With any luck, the holiday event will happen as normal and Guests can see one of their favorite Christmas characters. However, it is possible that the Grinchmas experience may be modified. Inside the Magic will update readers when information on the holiday experience is released.

Will you miss seeing Whoville on the Studio Backlot Tour? Let us know in the comments!

Click here to get started booking your Universal Studios vacation!