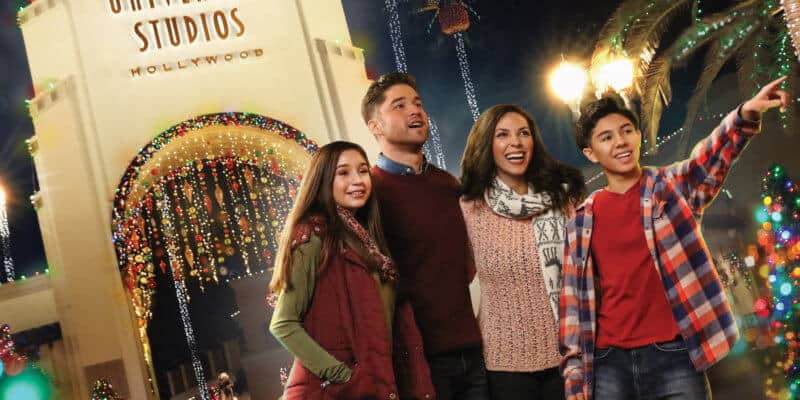 As Halloween season kicks into full gear, Universal Studios Hollywood has just announced a full slate of fun and excitement for the Christmas season to follow. This lineup of wintery entertainment includes glistening snowfalls, spectacular nighttime projections on the Hogwarts castle and The Grinch.

Glistening Snowfalls: Christmas in the Wizarding World of Harry Potter

This holiday season at Universal Studios Hollywood yuletide spirit will be enhanced throughout the land as Hogwarts castle transforms with a dazzling light projection spectacular. Once nighttime arrives at Hogsmeade village, “The Magic of Christmas at Hogwarts Castle” will illuminate Hogwarts School of Witchcraft and Wizardry. The show will feature colorful imagery and animations that will cover Hogwarts castle as beloved music from the Harry Potter films play in the background.

Another returning favorite to this year’s festivities is The Frog Choir, an a cappella singing group of Hogwarts students and their giant throaty frogs. Similar to last year, The Frog Choir will entertain guests with catchy holiday tunes as they sing along with their amphibian companions.

Treats that are not to be missed during this special celebration is hot Butterbeer and coming holiday-themed fare, which will be sure to delight the foodie in all of us.

Similar to last year, Hogsmeade village will also see a flurry of snow! Take a look at Christmas in Hogsmeade Village last year in the video below.

The Who-lebration will be in full force as Grinchmas returns to Universal Studios Hollywood. Guests will be joined by The Grinch, his dog Max and a town full of Who-ville Whos.

This event will come to life with a 60-foot tall whimsical “Grinchmas” tree and Martha May Who-vier, the famous love interest of The Grinch in Dr Seuss’s “How the Grinch Stole Christmas.”

During the event guests will also get to experience the Who Dolls, who will take center stage to perform musical sets that are sure to delight and chase out any lingering grinchy sentiments. Another entertainment offering coming to this year’s lineup of live music entertainment is The Who-liday Singers, a hip boy-band ensemble, who will perform a cappella concerts consisting of a mix of Christmas favorites and pop rock.

Additionally, at Universal Studios Hollywood you will find holiday decor and festive whimsy at “Despicable Me Minion Mayhem” and the adjoining “Super Silly Fun Land” as the merry and mischievous Minions spread Christmas cheer.

The Universal parks aren’t the only place to see Christmas cheer! Some of the following holiday celebrations can be found at Universal CityWalk and the 5 Towers plaza:

The festivities at Universal CityWalk run this year from November 23 through Christmas Day, December 25.

Are you excited for these coming holiday festivities at Universal Studios Hollywood? Let us know in the comments below!

Comments Off on Christmastime at Universal Studios Hollywood details released