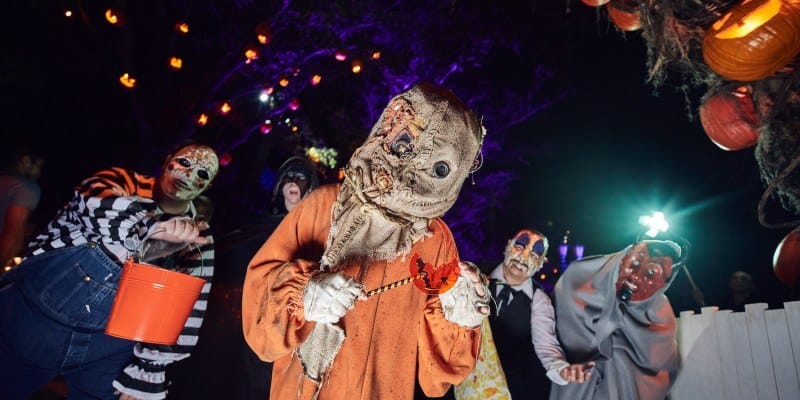 For over a quarter of a century, Universal Studios’ Halloween Horror Nights have frightened fear fans with sensational shows, over the top haunted houses, and sinister “scare zones.” This ultimate Halloween party takes place at all four of the company’s theme parks around the globe (Hollywood, Orlando, Japan, and Singapore).

It should come as no shock that the king of classic horror also hosts one of the most popular Halloween events around. From mid-September through the end of October, Universal’s theme parks transform into an after regular park hours event that attracts thousands of eager guests annually. 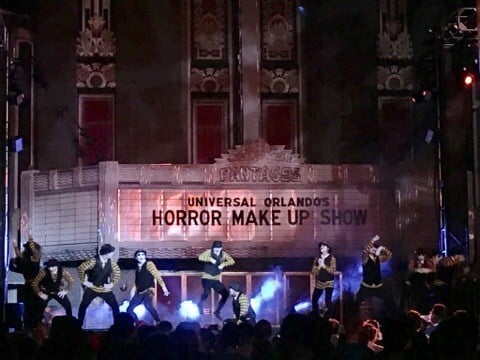 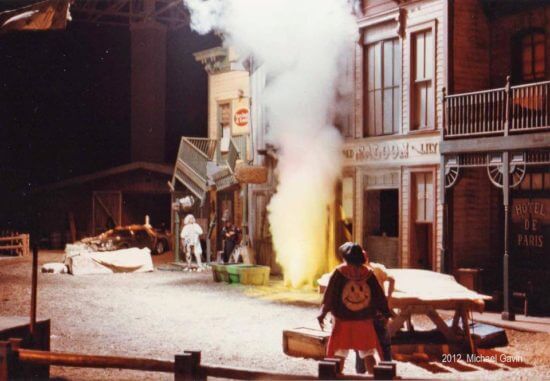 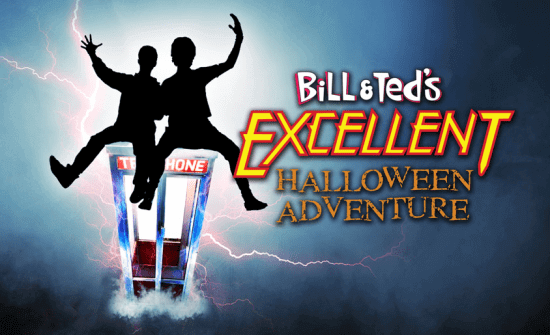 The haunted houses of Halloween Horror Nights come in two flavors. These enclosed environments of eerie entertainment can be based on either outside intellectual properties (IPs) or original in-house created nightmares. An average of nine new haunts materializes each year. 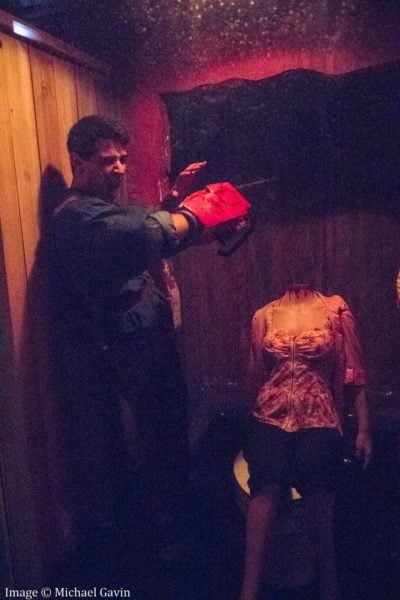 Original monster mazes may carry on a theme over several years or can be one-time terrors.  Many of these fictional horrors “take place” in the town of Cary, Ohio. Examples of original “houses” include wild west ghost town of “Lightnin’ Gultch,” madness of several versions of “Psycho Scarapy,” and the vexing vessel “S.S. Frightanic.”  Some have even added a bit of creepy comedy: “Leave it to Cleaver,” fear filled fairy tales of “Scary Tales,” and the dark comedy from horror host’s “H. R. Bloodengutz Presents: Holidays of Horror.” 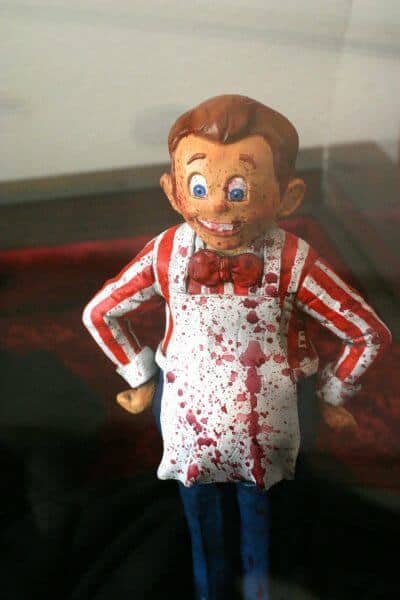 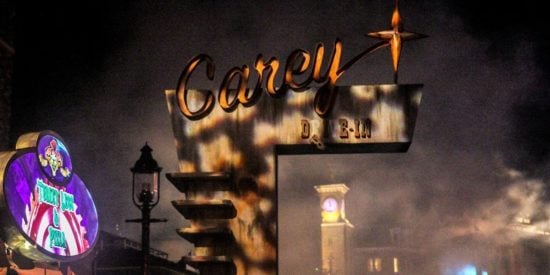 In addition to nightmare inducive, immersive haunted houses, several themed “scare zones” are scattered across the park. “Scare Zones” are areas outside of the haunted mazes, swarming with roaming monsters ready to bring boo to a new level. Fantastic effects, such as lighting and gratuitous fog, create foreboding outdoor environments from which these creatures prey on guests. 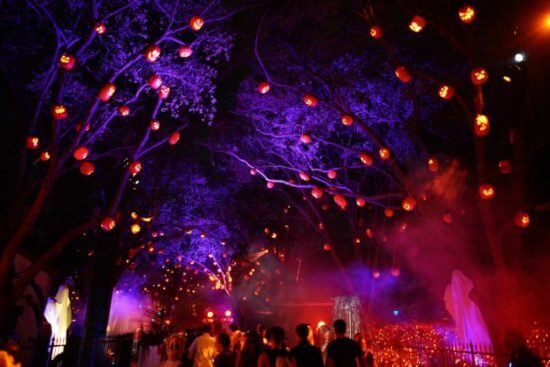 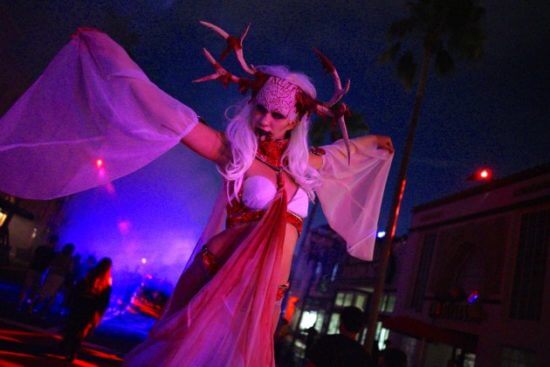 Paralyzing performances from vampires, zombies (and/or walkers), clowns, post-apocalyptic mutants, aliens, even past event icons secure startled screams from those daring to venture into these themed realms. 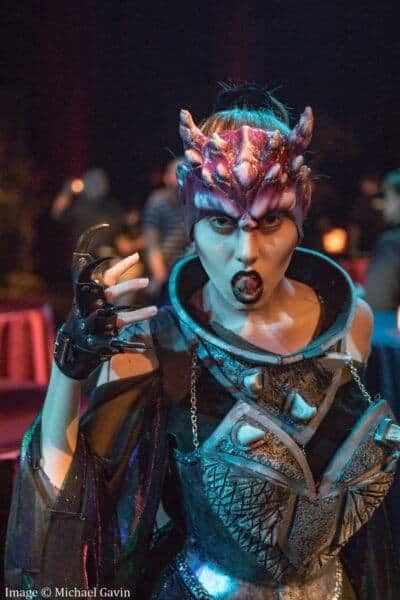 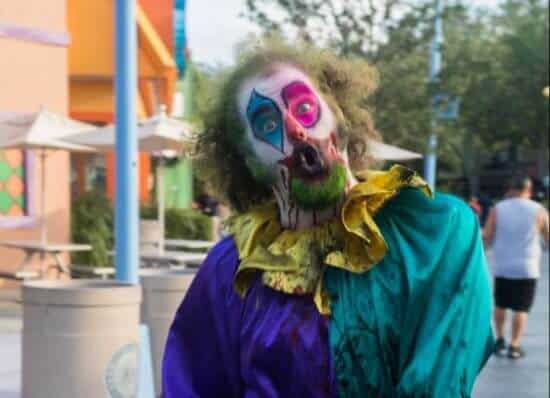 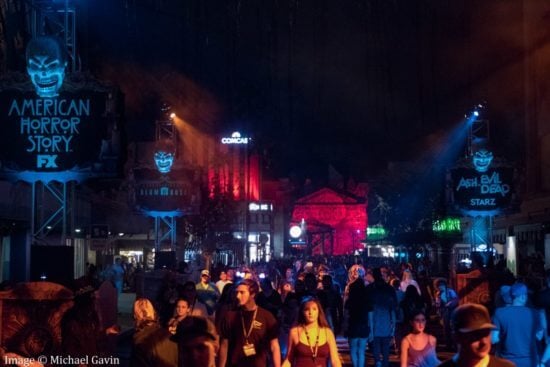 Most dreaded of all these scare zone nightmares are the chainsaw-wielding scareactors. Known as the “chainsaw drill team,” clowns, cheerleaders, soldiers, and others roam the event, chasing guests with their loud, malevolent machines. 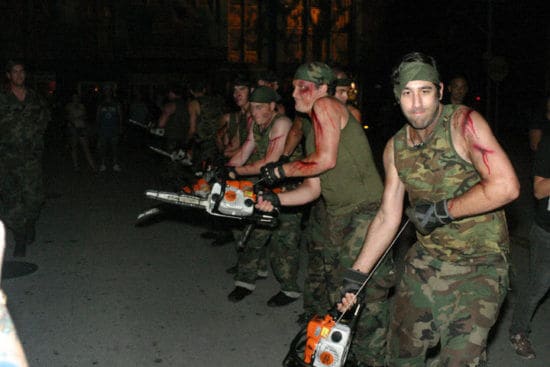 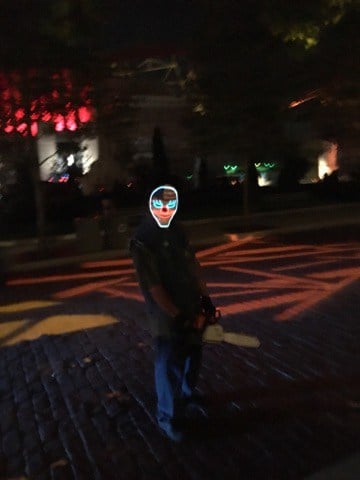 NOTE: while these dark denizens roam freely, chase without warning, skillfully surprise and get in guests’ faces, they cannot and do not deliberately touch attendees.

What started out as a few nights of Halloween fun in Orlando during October 1991 has emerged into a mighty monstrous multi-day fear fest at all of Universal Studios’ resorts which includes Universal Studios Hollywood, Universal Orlando Resort plus their international parks. 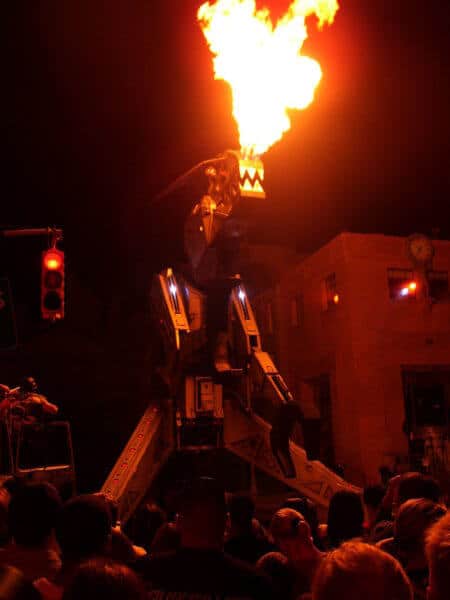 Several of Halloween Horror Nights have included host icons.  Characters like Jack the Clown, the Caretaker, the Director, and “Fear Itself” (for the 20th anniversary of Orlando’s event). 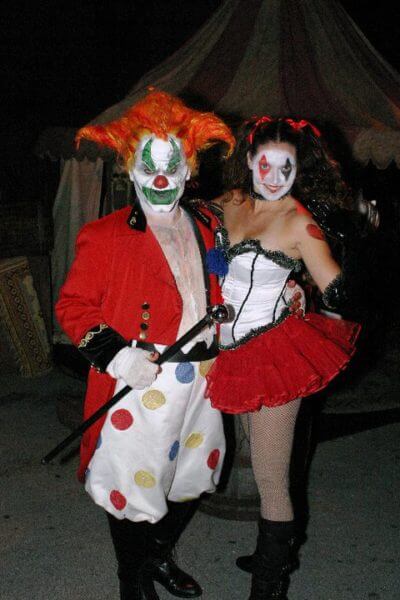 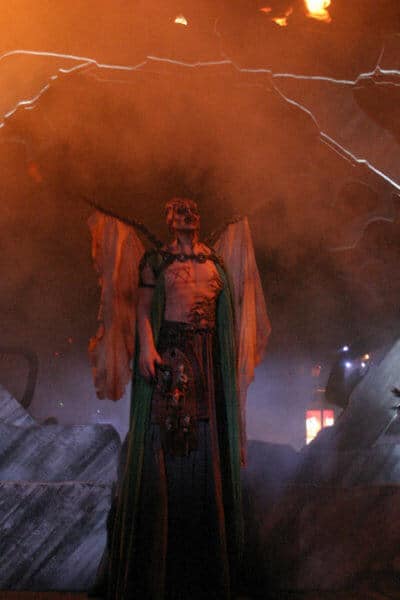 Learn more about past Halloween Horror Nights events (and read reviews) from ITM’s extensive coverage of the event over the years. 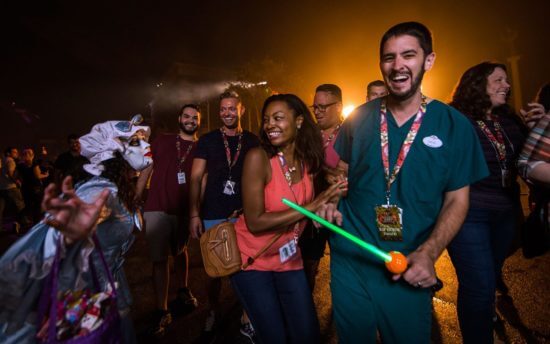 As Halloween Horror Nights attract thousands of guests for this premier Halloween party, some evenings can be extremely crowded.  Wait times for popular haunted mazes can exceed two hours.  There are two ways to combat the long lines: Express Pass and RIP Guided Tours. 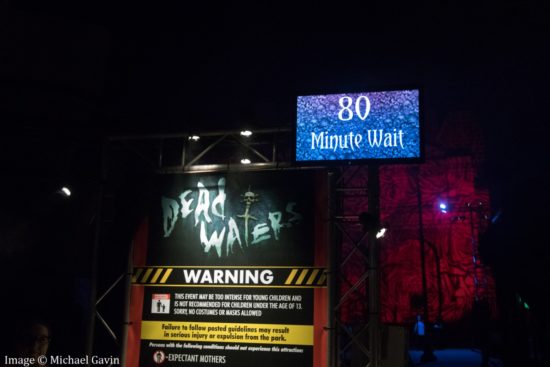 Express Passes can be purchased for each evening.  These give attendees the privilege of using exclusive queue lines.  Wait time is shorter than the “regular” stand-by line but can still be lengthy on occasion. RIP Guided Tours will cost more than an Express Pass but are a great way to ensure seeing all haunts in a single night.  There are two types of tours: private and group.  A private tour means that only those in a particular party are part of the tour. Group tours are made up of a limited number of guests from different parties. 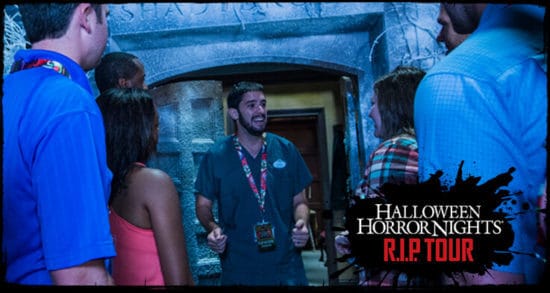 Meet the monsters at mealtime.  Dinner is served, but not free from fear.  This character dining add-on is a ghoulishly great way to set the tone for what’s to come. This all you can eat buffet currently costs $49.99. 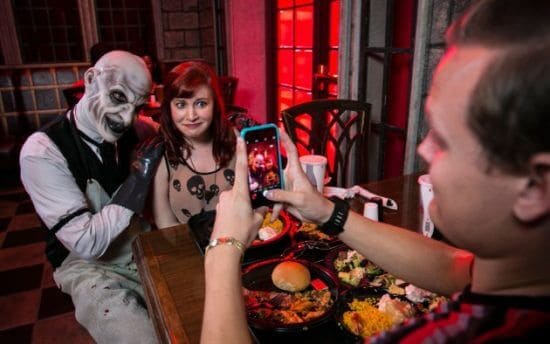 Wanting to dig deeper into the details? Go backstage with lights-on tours of select haunted houses.  This tour takes terror fans into the macabre magic within Universal Studios’ eerie environments.  Close up inspection reveals the passion and skill poured into each maze.  Three options are usually available: morning tours, afternoon tours and a combination of both. 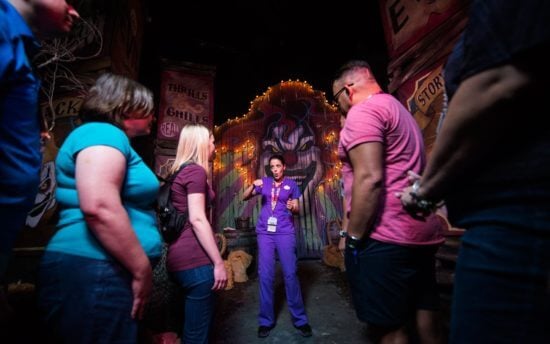 Is this the right Boo for you?

Geared towards adults and older children, Halloween Horror Nights’ scares include graphic gore, intense scares, and an overall fiendishly frightening atmosphere throughout the event.  It is clearly not intended for the faint of heart or easily terrified small children.  Some younger children are not phased by this and enjoy this kind of horror.  Ultimately parents should gauge what is suitable for their little minions. 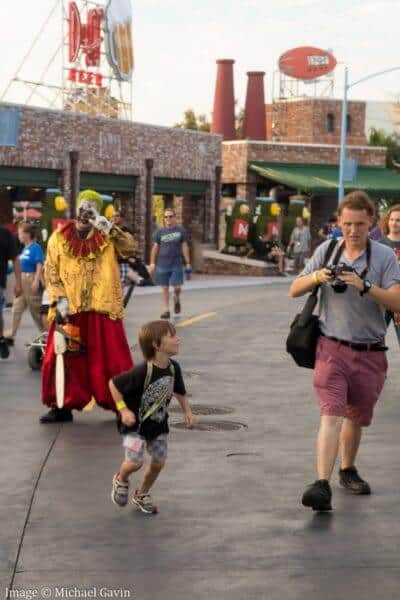 Halloween Horror Nights take place from mid-September through Halloween (and sometimes the weekend after) at all four of Universal Studios’ theme parks (check each park’s website for dates, times, and tickets). 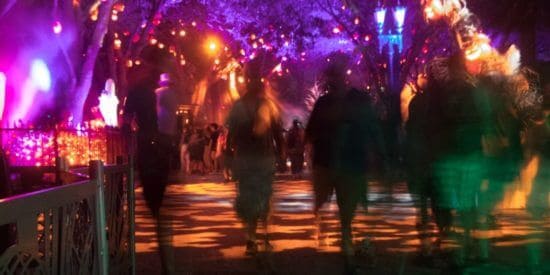 As some haunted mazes take up attraction queue space, not all rides may be in operation during Halloween Horror Nights.

Universal Studios’ Halloween Horror Nights is a separately ticketed, after normal park hours eerie event.  Intense scares and (simulated) graphic gore suggest this is generally not an experience suited for young children. Costumes and masks are not permitted. Alcohol is served (bring I.D.) in limited amounts. 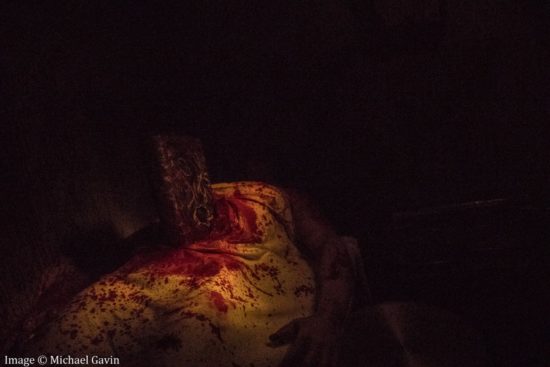 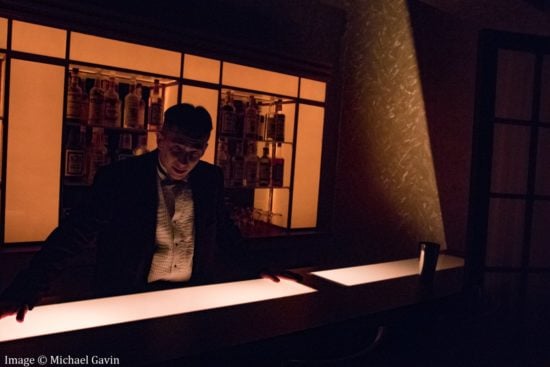 Be sure to dig up ITM’s Horror Night Survival guides (general and first-time visitors) for additional tips. 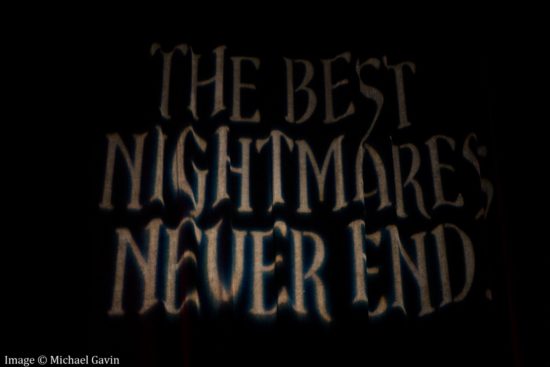