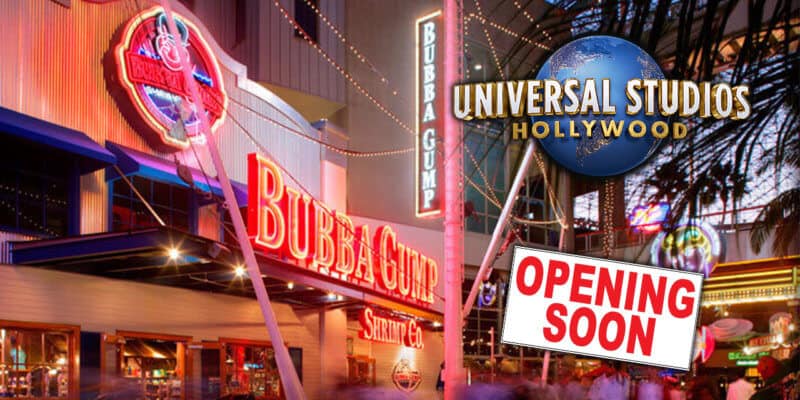 Inside the Magic called a Universal Team Member, who shared that nothing at Universal CityWalk has reopened yet, and CityWalk has not even announced a phased reopening for anytime soon. The Team Member stated that the Bubba Gump announcement was likely a mistake.

It also appears as though Bubba Gump Shrimp Co Universal has since deleted their announcement of reopening from their Facebook page. At this time, we are unsure of when Universal Studios Hollywood or its CityWalk will reopen.

It seems Universal Studios Hollywood is getting ready to reopen its CityWalk as the entertainment complex’s Bubba Gump has announced via its Facebook page the restaurant is officially open.

“We’ve re-opened our dining rooms in Hollywood, California! As we re-open our dining rooms, we will continue to practice and take part in preventative measures to ensure the safety of you and your family. We look forward to serving you once again!

The hours for Bubba Gump can also be seen updated on the official Universal Studios Hollywood CityWalk website as well, which shows the restaurant is open daily from 12 pm – 8 pm.

At this time, Universal Studios Hollywood has not announced an official reopening for its CityWalk. However, as this restaurant sees reopening, it goes without saying that guests will be allowed back on property — which means we can count on seeing more and more businesses within the center to begin reopening as well.

As we recently reported, Universal Studios Hollywood has already reached out to L.A. County in an effort to get approval for the reopening of its theme park.

Last week, Karen Irwin, President and Chief Operating Officer of Universal Studios Hollywood, asked the L. A. County Board of Supervisors to allow theme park workers to return to work immediately in order to prepare for reopening as she said that theme parks can be a safer environment than some other public places where citizens have already been allowed to return.

“Theme parks actually offer a more controlled environment than beaches, gardens or hiking trails,” said Irwin, speaking at a meeting of the county’s Economic Resiliency Task Force. Irwin also noted that theme parks are developing protective measures that will allow for physical distancing within the parks, in addition to the abilities of limiting capacity and managing guest flow.

Irwin continued: “We would like approval to begin the reopening process immediately in order to get our employees back to work. L.A. County parks will be ready to begin reopening between mid-June and July 1.”

At this time, it has not been confirmed if L.A. County has given the go-ahead for a reopening to Universal Studios Hollywood. However, from the reopening of Bubba Gump, it seems at least the theme park resort is attempting to begin reopening its CityWalk location.

Will you be going to Universal CityWalk to dine at Bubba Gump? Let us know in the comments!