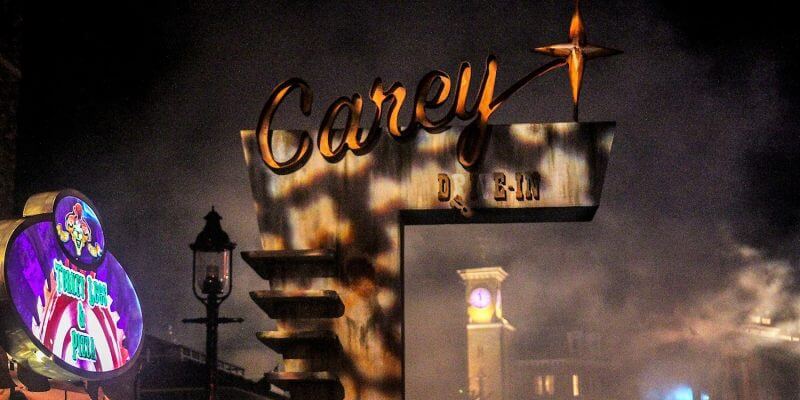 Many towns across America are home to haunted houses or locations.  Either a spooky cemetery or site of a terrible tragedy is the basis for unexplained phenomenon or spirited sightings.  There’s one town that stands out in the realm of horror happenings: the village of Carey, Ohio. Established in 1858, the village of Carey is located in Ohio, located in Wyandot County. Located between Columbus and Toledo, about 3500 residents call the village home.  Envisioned in 1843 by R.M. Shuler and W.J. Buell, the village was incorporated 1858. Carey takes its name from Judge John Carey who was also president of the railroad that traversed the town. Many of Universal Orlando’s original Halloween Horror Nights haunts and scare zones are set in this small Ohio village.  It is the hometown of one the event’s designers and has seen more than its share of horror.  While some of the frights are sequels or have ties to earlier years, the references to Carey, Ohio, did not appear in event descriptions until 2008 (and have been materializing ever since). To help your Halloween Horror Nights nightmares resurface, listed below are a few of the fears found in Carey Ohio.

“Something “different” has moved in among the sewers of Wyandot County, Ohio. The locals claim that these creatures, the “Sculders”, are two feet tall, with the body of a snake. As a volunteer member of the local water district, it is your civic duty to venture into these pipes and restore the flow. But beware, the locals are wrong about the “Sculders” and the only thing that will be flowing is your blood as it leaves your lifeless body.”

“Samuel Meetz works for the people of Carey, Ohio as a butcher, bringing them the freshest meat possible. With a steady livestock of transients and town lawbreakers with which to serve, and a staff of volunteers who will preserve their towns deadly secret by any means necessary, there is truly no end in sight for Samuel or his family business. As Sam always says: Meet Me at Meetz… The Z stands for cannibal.”

“The Spirit Seekers have come up with a machine that actually gathers spirits toward it. The group has decided to do a live broadcast from inside one of the most reportedly “haunted” sites in the entire United States, The Wyandot Estate, built in the 1920’s in Carey, Ohio by the entrepreneur Malcolm Wyandot and his wife Lydia. The house has been rumored to be haunted since Malcolm brutally killed 13 dinner guests and his wife Lydia before committing suicide on October 30, 1929. The team is about to get more than they bargained for as the murdered hear their call and answer with terrible violence.”

“Join creature feature host, H.R. Bloodengutz, in his final televised broadcast as he presents a SCARE-athon of holiday-based horror that is guaranteed to cleave you screaming for more.”

“If enough people believe in something, perception can become reality. In Carey, Ohio, the perception was that countless horrific acts had occurred in the old Hartford Mansion. The reality was that the curse which befell the house was far worse than any story ever told.”

“Hang on tight aboard a militaristic train convoy that is secretly transporting the “Dogs of War”—a genetically engineered super soldier outfit. These bloodthirsty maniacs are only bent on mayhem and destruction of a speeding train. This is Havoc!”

“The Carey Drive-In movie theatre has been closed for decades after grisly murders during a double feature. It’s lights, camera, carnage as the theater nicknamed “Die-In” by the locals lives up to its name.”

“In the small village of Carey, OH, the crumbling house on 19 Hemingway Lane hides dark secrets. Back in the 70s, a wealthy philanthropist, Nicodemus Felling, bought the property and watches over it still. But now the house now harbors a nest of bloodthirsty vampires. And if you are foolish enough to awaken them, you will find no semblance of charm, only a savage, bestial hunger.”

9 nightmares, all tied to a small village in Ohio? That’s not all, several of the Gothic haunts are set in Carae, France, could there be a connection? For now, Carey Ohio seems to have a hold over Universal Orlando’s Halloween Horror Nights original fear experiences..  Perhaps the place should be renamed “Scary” Ohio?