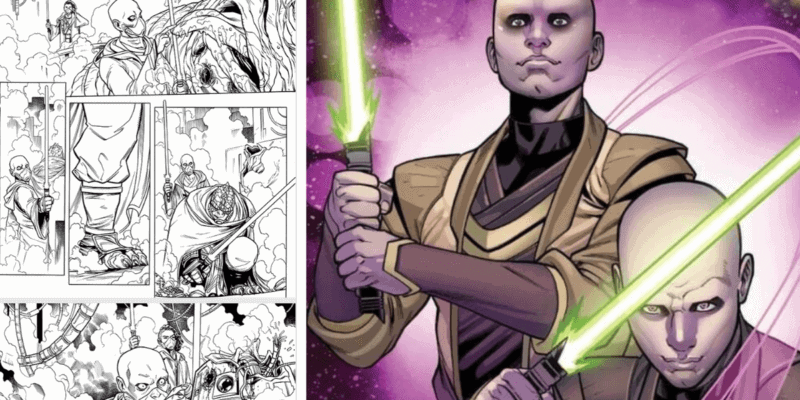 The Force was strong with Star Wars as they revealed that two fan-favorite Jedi are transgender non-binary.

The characters in question are Terec and Ceret from The High Republic comic series by creator Cavan Scott. Terec and Ceret are Kotabi twins who share one mind and are able to communicate through a physical link even if they are apart.

In a variant cover edition of Scott’s comic book series, which is illustrated by Javier Garrón, Star Wars used #TransDayOfVisibility to share the news that Terec and Ceret are now LGBTQ, or more specifically transgender non-binary characters, in the Star Wars canon. Posting to their official Instagram account, Star Wars said:

“In honor of #TransDayOfVisibility we’re proud to unveil an exclusive cover highlighting Terec and Ceret, trans non-binary Jedi, currently featured in Marvel’s The High Republic comic. We support trans lives and we are passionate and committed to broadening our representation in a galaxy far far away. #TDOV”

It’s not the first time that Star Wars have used the Marvel Comics series to confirm certain characters’ identities in the Star Wars universe. Earlier this month, Star Wars canonically confirmed that Lando Calrissian is pansexual after including him on the cover of the upcoming June Pride Month releases, alongside other queer characters like Doctor Aphra.

Writer Cavan Scott has previously shared he writes the characters as non-binary, but this confirmation from Star Wars is sure to go a long way in promoting LGBTQ stories in the future.

Who are Terec and Ceret? And what is The High Republic?

In the comic series, Terec and Ceret are introduced aboard the Starlight Beacon space station, where they go on to aid Jedi Master Sskeer in investigating a scrambled distress signal coming from the Kazlin system. The two characters who share the same mind, and are also referred to as bond-twins, often finishing each other’s sentences and can feel when the other is in pain.

The High Republic Era was the time the Galactic Republic was at its height, where the golden age of the Jedi meant for deep space exploration throughout an unruly and unsettled galaxy, long before the time of Luke Skywalker (Mark Hamill) and Han Solo (Harrison Ford) graced our screens.

The High Republic Era is currently being explored in the Marvel Comics series as well as in a string of novels, the first of which, “Star Wars: The High Republic – The Light of the Jedi” by Charles Soule, debuted in January 2021.

The upcoming Acolyte Disney+ series, from Russian Doll co-creator Leslye Headland is said to be set during the High Republic Era — meaning we will hopefully see the LGBTQ characters, Terec and Ceret on the small screen in the future.

What is Transgender Day of Visibility?

Transgender Day of Visibility is about recognizing and celebrating transgender and gender non-binary individuals, advancing equality, and showing solidarity with the LGBTQ+ community. Recently The White House shared their proclamation on the day. The establishment said:

“Transgender Day of Visibility recognizes the generations of struggle, activism, and courage that have brought our country closer to full equality for transgender and gender non-binary people in the United States and around the world.”

You can read the full statement here.

Now more than ever, big movie studios like Lucasfilm and Marvel are under increasing pressure to diversify their creative team and on-screen talent. Disney and Star Wars faced intense scrutiny and backlash during the run of their sequel trilogy of the Skywalker Saga when actors like John Boyega (Finn) and Kelly Marie Tran (Rose) were subject to racially charged attacks on social media. These recent steps to include LGBTQ representation in their stories show the Star Wars universe is headed in the right direction.

There were even rumors that a relationship could develop between Finn and Poe Dameron (Oscar Isaac) when Star Wars: Episode VII – The Force Awakens (2015) kicked off the sequel trilogy.

We have seen this strive for diversity in the Marvel Cinematic Universe too with Eternals starring Phastos (Brian Tyree Henry) — the first gay character and superhero featured in the MCU — or with the rumored Hawkeye spinoff, Echo, which would star Native American deaf actress, Alaqua Cox. We may even get to see Lando Calrissian explore his queer identity in the highly anticipated Lando event-series. There is a lot of potential for LGBTQ representation in Star Wars’ upcoming projects.

Star Wars’ stand on acknowledging Trans Day of Visibility, as well as confirming that favorite Jedi duo Terec and Ceret identify as trans non-binary is a huge step forward in making sure the Star Wars franchise features LGBTQ representation and is as accepting and welcoming as possible, for all its fans.

You can purchase a copy of “Star Wars: The High Republic – The Light of the Jedi” here for $21.99

Will you be reading the next installment in The High Republic comic series?