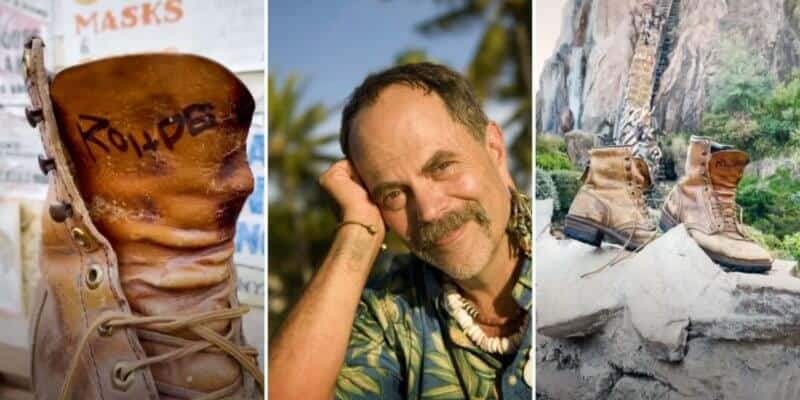 Disney Imagineer, Joe Rohde, who is known for his work on Disney’s Animal Kingdom as well as other projects, has left his legacy at the Disney Parks. His brilliancy and creativity brought Guests some of the most iconic experiences and attractions including his work on EPCOT, Expedition Everest, Na’vi River Journey and Flight of Passage located inside Pandora: The World of Avatar, where he also worked on the land overall, and more.

Rohde has already been missed by so many Disney Parks fans, but his legend goes on thanks to his.. boots?

That’s right — Legend has it that the Disney Imagineer inscribed the name of every project he worked on onto his boots — And now, Disney Parks is confirming this to be true!

Disney Parks took to TikTok to share a video of Joe Rohde‘s boots sharing that the Disney Imagineer did, in fact, inscribe the name of every project he ever worked on onto his boots. The company had the chance to take those boots to some of those locations! In the video, they say:

“Legend goes that Disney Imagineer, Joe Rohde, inscribed the name of each project he worked on on his boots. Well, folks that legend’s true. These are the boots and we took them to some of the locations he had a hand at creating. Can you spot them all?”

Did you know Disney Imagineer Joe Rohde wore the same work boots for ALL of his projects? ? #Disney #DisneyParks #Imagineer #Boots #Aulani #DAK

How cool is this? Rohde has worked on so many different projects, did you spot all of the locations within the video?

Joe Rohde is already missed by so many Disney Parks fans — But here at Inside the Magic we wish him nothing but the best and hope he has a very happy retirement! As it turns out, however, Rohde is still staying busy. He recently became Virgin Galactic’s first Experience Architect.

More on Joe Rohde’s Time With The Walt Disney Company

Joe Rohde took to Instagram to announce his retirement late last year as he reflected on his 40-year career with Walt Disney Imagineering, writing:

I’m sure by now many of you have come across the news that I am retiring from Walt Disney Imagineering. It has been 40 years since I stepped foot in the door at age 25, not knowing anything about theme parks, Disney, or what it meant to work for a big company. Every day of my life since then has been a learning experience,” Rohde wrote. “I’m very glad to have had that opportunity, and proud of the work that has been done, not just by me, but by all my fellow Imagineers, and especially those who worked by my side over the decades. But 40 years is a long time, and this strange quiet time seems like a great opportunity to slip away without too much disruption. If I wait, I will once again be in the middle of another huge project and by the time that is done, I would be truly old.

After Rohde announced his retirement, D23 shared the following information regarding his time with Disney Imagineering:

It’s been a wild ride for Walt Disney Imagineering’s Joe Rohde, who has spent more than 40 years bringing to life some of Disney Park’s most iconic experiences and attractions. Starting as a model designer on EPCOT, Rohde has since overseen projects such as Disney’s Animal Kingdom Park; Aulani, A Disney Resort and Spa; Expedition Everest; and Pandora: The World of Avatar. […]

D23 continued to explain how the Disney Imagineer has impacted everyone at The Walt Disney Company over his 40-year career:

Throughout his career with Walt Disney Imagineering, Rohde has always been a friend of D23, speaking at panels at the D23 Expo and Destination D, joining us for events such as the opening ceremony of Pandora the World of Avatar, and helping us celebrate the fifth anniversary of Aulani, A Disney Resort and Spa.

Did you know this fun fact about Joe Rohde’s boots? Let us know in the comments below.

If you want to visit the Disney Parks to experience some of the projects Rohde worked on — including Expeditiono Everest, Na’vi River Journey, Flight of Passage, and more, start planning your vacation today!