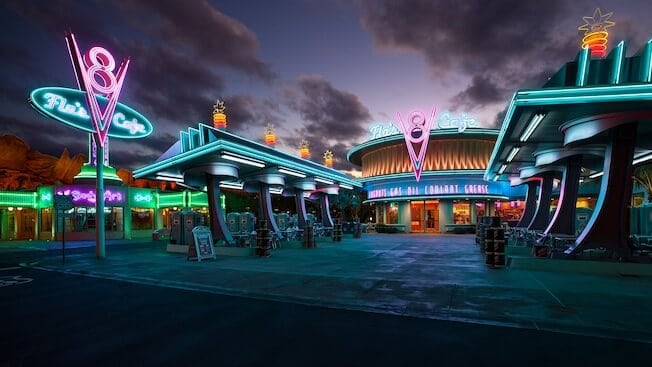 When Disney announced that Buena Vista Street at Disney California Adventure Park would be opening back in November, Guests were thrilled that they would be able to eat at popular locations like Carthay Circle and Smokejumpers Grill.  Reservations for Carthay quickly filled up and Guests lined up down the street to get a taste of a Disney hot dog.

More restaurants within the park were able to open in March for the limited-time ticketed event, A Touch of Disney. This limited-time event is sold out and ends on April 19.

Some of the restaurants that have been available at A Touch of Disney are Concina Cucamonga and Pixar Pier’s Lamplight Lounge. One restaurant, however, remained noticeably closed — the popular Cars Land diner, Flo’s V8 Café.

Flo’s is a staple in Cars Land and is known for its roadside diner theme — with a Cars twist, of course — and its 1950’s music that is piped in to entertain Guests while they eat.

Well, things have changed at California Adventure and Flo’s is now open for business! Guests seem to be thrilled with the decision and have since been creating long lines at the Route 66 eatery.

ITM was on the scene to capture pictures of the newly opened dining establishment.

While crowds were seen waiting to enter the restaurant, there was also an area for those who decided to use Mobile Order. Disney has been increasing the number of restaurants that use the Mobile Order option, which cuts down wait times and lines at restaurant locations.

In 2018, Flo’s menu received a major revamp and it seems that the food has been missed and remains a Guest favorite. Guests wanting to eat at Flo’s can treat themselves to a variety of delicious dishes, including the Ka-Cheeseburger and Flo’s Famous Fried Chicken.

Guests looking for a sweet treat can indulge in one of Flo’s absolutely mouthwatering shakes, topped with their famous “road gravel” (don’t worry, it’s just some yummy crumbled cookies!)

Flo’s V8 Café is also making sure to remind Guests of the health and safety procedures in place at Disneyland Resort. While walking around the park and sipping on your scrumptious shake may sound inviting, it is not currently allowed.

Guests may only eat and drink while they are socially distanced in a stationary position.

It will be open from 10:30 a.m. to 7 p.m. when the park closes, and mobile ordering will be available. Visit the official Flo’s V8 Cafe webpage for the most up-to-date information.

Are you excited to eat at Flo’s V8 Café again? What is your go-to meal?

Comments Off on Another Restaurant Has Opened at California Adventure