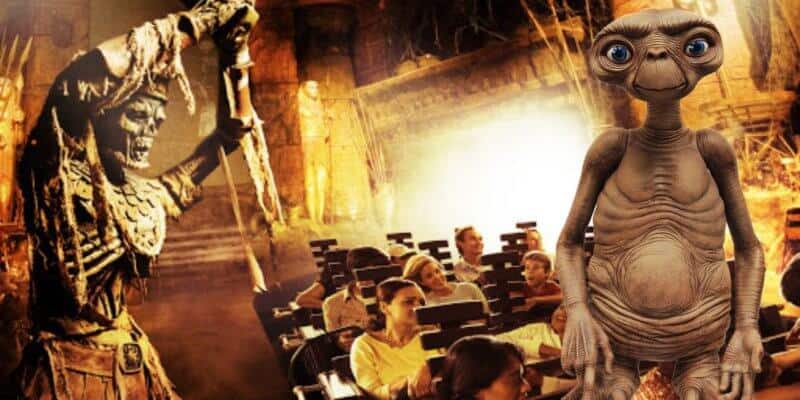 In many theme parks, when an attraction is replaced with another, there are Easter eggs left behind from the previous attraction, almost like a homage to what once stood.

We oftentimes see this done in Disney and Universal theme parks, especially. Take a look at The Many Adventures of Winnie the Pooh at Magic Kingdom. In 1999 the attraction replaced Mr. Toad’s Wild Ride and now, you can see Mr. Toad handing over the deed of the attraction to Owl.

Well, to make room for Revenge of the Mummy: The Ride, another ride had to go. E.T. Adventure originally occupied the show building but was removed to make way for the new spooky thrill ride. That being said, E.T. Adventure was very beloved by fans, and no one wanted to see it leave, so Universal decided to commemorate the attraction forever.

Now, if you ride Revenge of the Mummy: The Ride you may notice that an extraterrestrial being can be seen within. No Context E.T. (@ET_nocontext) posted a photo of the classic Universal character perched up above in the pyramid room of the attraction, so next time you ride, you can have an idea of where to find him.

It looks like E.T. is a long way from home! Or, perhaps since this was his attraction, he is exactly in the right place.

What easter eggs have you noticed on attractions at either Universal or Disney theme parks?

Comments Off on There’s a Hidden E.T. In Universal’s ‘Revenge of the Mummy’