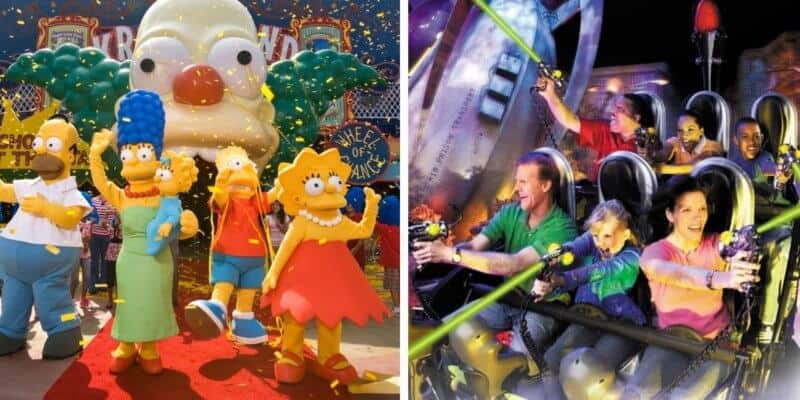 Theme parks change their lands and attractions frequently to make way for new IPs or just to upgrade the Guest experience. Sometimes, when a ride changes, Guests miss it dearly, but other times, they may be holding the door open.

Universal Orlando Resort is compromised of two large theme parks — Universal Studios Florida and Universal’s Islands of Adventure — water park, Volcano Bay, and the Resort’s shopping and eating center, CityWalk. Although the theme park resort is filled with incredible theming, detail, and attractions, not all Universal fans are fully satisfied with the offerings that are currently available.

Reddit user JLMJ10 created a post discussing what attractions were on the “chopping block” at Universal Orlando, so let’s take a look at what this Universal fan thinks needs to be nixed from the park and what other fans — including myself — are saying.

What attractions and experiences are in the chopping block? Opinion from UniversalOrlando

Springfield: This is because the Theme Park Rights expire in 2028 and I seriously doubt Disney will renew the licensing agreement.

The Simpsons are now owned by Disney thanks to their buyout of 20th Century Studios — formerly 20th Century Fox. In 2028, the contract that Universal currently has with Fox will expire and, as it stands, we are not sure what they will do at that point in time.

Disney could renew theoretically renew the contract, Universal could pay a licensing fee, or the land itself could be eliminated from the park in the future. Only time will tell with this attraction.

In my opinion, I think the land as a whole is really well-themed, but the attraction leaves many Guests feeling quite a motion sick, so I would not be opposed to a retheme. Furthermore, it does seem somewhat unlikely that Disney will renew the contract since The Simpsons is now technically a Disney IP.

Expo World: I an [sic: am] sad of this possibility but the reason it is on the list is because Universal doesn’t care about nostalgia they like to use new IPs and MIB and Fear Factor aren’t popular as before. Plus Fear Factor has been closed and hasn’t reopened and the Bill and Ted show ended.

For Expo World, I both agree and disagree with this statement. I don’t think that Universal will rid themselves of Men in Black. It’s a fun attraction that does not receive many complaints from Guests. The Fear Factor show, however, does not hold the same timelessness, and I could see Universal replacing it with a more current and up-to-date IP.

Kristen Bell and Dax Sheppard are starting a new game show under NBCUniversal, that could be a perfect concept for a stage show at Universal Studios, but that’s just a personal thought.

Kid Zone (except ET): Basically the majority of characters aren’t recognizable except maybe for Curious George. The Barney show is rumored to close permanently and that we will get a Pokémon Land. (Sort of correct they have closed Barney Permanently)

Alright, so this prediction is already coming true, in part. A Day in the Park with Barney is now closed, but Universal has not announced any more closures in the land. The Pokémon land theory also currently remains are just that. I personally think the Barney show will be replaced, but I do not think Kid Zone will undergo a huge change in the near future.

Blue Man Group: With done layoffs by Cirque du Solei (Sorry if I misspelled it) to members of the show and recent rumors of closure this may be a possible candidate plus this may be the location of the rumored SNL Venue in Citywalk. ( This prediction was correct)

This proved to be correct. The Blue Man Group will be leaving Universal’s theme park.

Lost Continent: Lack of Attractions pretty much only Poseidon’s Fury which is closed and the closure of the Sinbab [sic: Sinbad] show this is one of the most likely.

The Lost Continent is stunning in its architecture, but it is a huge area of land that does not always have many Guests present. I do not think it needs to go, personally, but perhaps Poseidon’s Fury could get an update to once again attract Guests.

Toon Lagoon: Same reasons as Kid Zone but this is unlikely because the water rides are really popular so maybe a retheme.

As the Reddit user states, the water attractions are quite popular in Toon Lagoon, so personally, I do not think they will go, nor do I think they need to be changed. Both are fantastic, in my opinion (and will leave you dripping)!

The Reddit post also garnered a few comments with fan opinions of their own, let’s take a look at a few.

Reddit user Prestigious-Look9121 noted that they want to see Lost Continent get a Legend of Zelda retheme.

User Meanstreamer had a very interesting point that actually has me even flipping my vote about MEN IN BLACK ! Considering Ghostbusters is an incredibly popular Halloween Horror Nights house, I am sure many Guests would love to see it integrated into the parks more.

I could see a ghostbusters dark ride with a gun as a upgraded MIB experience. Once they have that up and running they could take down fear factor and MIB for a entire mini land.

We also took to Instagram to poll some of our readers on their favorite and least favorite attractions at Universal Orlando Resort. We received an overwhelming response, so below I am going to state the rides that were most popular in terms of getting the boot, and which were the most popular and loved.

Which attractions need to go?

Alright, so one of the most-voted-for attractions in this category was Rip Ride Rockit, which was surprising to me! The coaster is the biggest at Universal Studios Florida and allows Guests to pick their own music to ride to, which is quite unique. That being said, I don’t rush to ride the attraction when I visit, either.

Two attractions that were voted for quite often were Fast & Furious Supercharged and Race Through New York Starring Jimmy Fallon. In my opinion, these were both quick fixes to create new simulation-based attractions using screens, but they don’t offer much else. I agree that neither attraction is mind-blowing, but considering how new they both are, I doubt Universal is planning on removing either of them anytime soon.

The Lost Continent and The Simpsons Ride both received many votes, tying in perfectly to the Reddit post we previously discussed.

Which attractions should stay at the park forever?

MEN IN BLACK Alien Attack was actually an incredibly popular choice here — it seems that fans love the attraction!

Revenge of the Mummy is a beloved attraction as well. The ride is, in my opinion, one of the best rides on Universal property due to how unique the attraction is, so I totally understand why this was topping many Guests’ lists.

Arguably one of the best attractions at Universal is in the Wizarding World of Harry Potter at Islands of Adventure. Hagrid’s Magical Creatures Motorbike Adventure was a highly voted-for option, and if you have ever ridden it, you would understand why!

Interestingly, E.T. Adventure was voted for on both sides — some love it while others say it needs to go! Personally, I love the attraction and this is a classic staple at the park, but it is dated, and I can understand why Universal might want to remove it to build a more modern attraction.

All of this being said, with the tight budget caused by the ongoing pandemic, and Universal’s announcement that construction on Epic Universe will restart immediately, I wouldn’t be surprised if we don’t see too many changes at Universal Studios Florida or Islands of Adventure for the next little while.

What Universal attraction do you think needs an update?

Editor’s Note: The opinions reflected in this article don’t necessarily reflect the opinions of Inside the Magic overall.

Do you want to plan a Universal visit? Mardi Gras is underway and Guests can eat and drink while taking in the festivities at Universal Studios Florida! Universal’s Islands of Adventure will give you all the attractions your heart desires. Volcano Bay, Universal’s water park just reopened to Guests, and CityWalk is the perfect place to eat and shop! With so many savings on Universal Orlando Annual Passes and more, visiting has never been more affordable. Click here to begin your adventure today!