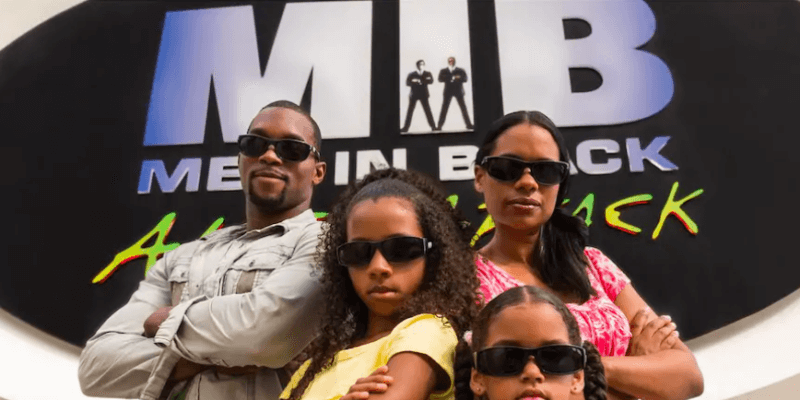 Men in Black: Alien Attack puts you in the MiB training facility and arms you with a weapon to defend the galaxy from the alien scum that means to destroy our planet. Only the training quickly becomes real, and you are thrust out onto the streets of New York to deal with the real thing. 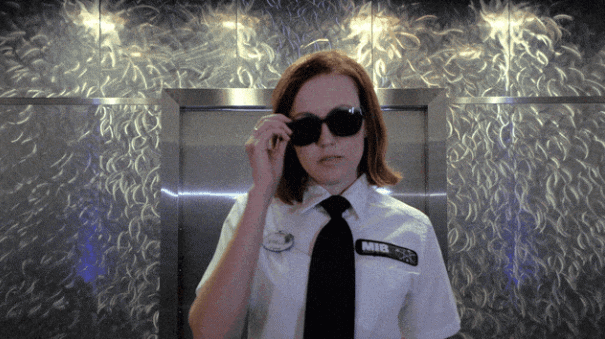 Suddenly, you are surrounded by aliens in a ride vehicle with five other Park Guests and you’re all trying to shoot as many targets as you can to score some points and prove yourself deserving of that black suit.

If you’ve ever experienced this attraction before, you know it can be pretty challenging and even overwhelming at times. A lot is going on, and limited time to rack up as many points as you can. That’s why I’ve put together this guide to help you become a Galaxy Defender and maybe even reach that coveted 999,999 point score!

Before we get into the specifics, let me provide some essential tips. First, you don’t get penalized for shooting and missing. It’s the exact opposite. You get points just for firing the gun, so keep shooting.

Second, there’s no need to pull and release the trigger. You can squeeze it the whole time, and your weapon will continue to fire.

Third, the gun will light up and make a sound when you hit a target, so you know you’re scoring points. If you’re shooting at a target and you don’t see your gun light up or hear it make a sound, move on to another target. Also, try not to look at your score. Looking away from the targets can be distracting and cause you to miss some of the best ones.

Finally, you can hit the same target multiple times. Just because you already got points from one alien doesn’t mean you can’t get more. There are a handful of marks you should stay on for multiple hits if you want to rack up the highest possible score. 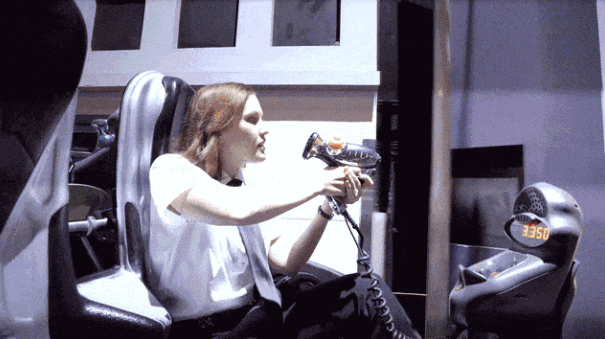 Now, let’s get into the good stuff!

As I’ve mentioned, the ride starts you off in the MiB training facility, with plenty of two-dimensional alien targets for you to aim at. I find it easiest to aim at the one that best lines up with your seat. If you’re on the right, shoot the target on the right.

Try to aim for the higher targets, but if you’re trying to hit one and you notice you’re not getting points, move on to something easier to hit. There aren’t any high-value targets here, so get what you can. 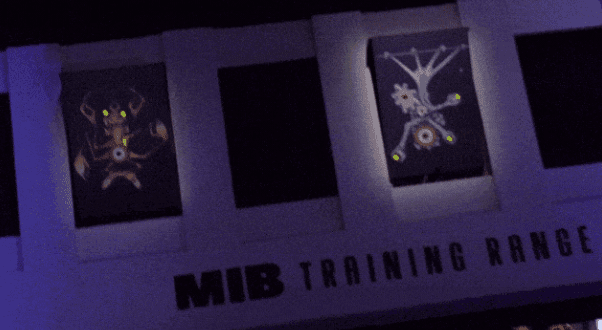 This is where it gets fun. You leave the training facility and head out to New York as your weapons get set to full power for you to take on some real aliens. Now, you’re ready to start scoring some fundamental points.

The first high-value target is none other than Frank the Pug. He can be found in a newspaper stand on the right side. He is much easier to hit if you’re on the red track (right side when you’re in your vehicle), sitting on the right side of your car, but you can hit him from any seat.

When you move on from Frank, look up to the windows. You’ll hear a glass break effect and see a lighting effect that makes one of the windows look broken. The alien in that window and the one next to it (with the opening and closing shutters) should be your following targets. Shoot them repeatedly.

As you turn the corner, you will see a giant alien in one of the buildings (pictured above). Your instinct will be to shoot his enormous eye, but the real target is actually in his guns. The one on the right (in his left tentacle) is relatively easy to hit and gives some big points.

Next, your vehicle will get blasted by the aliens and spin out of control. Once you stop spinning, your vehicle will continue moving backward into the next scene. Before you give up on this one, though, there will be one last alien in a window up high. The curtains will open and close continuously, but keep shooting at this one to grab some last-second points.

The next scene is an ambush. You’ll see an innocent-looking alien begging you not to shoot. Spoiler alert – he’s not innocent. A dozen or so aliens will pop out from hiding spots and ambush your vehicle, causing you to spin out again. There aren’t many points to be scored in this scene. Just pick one target and focus on it as long as you can. 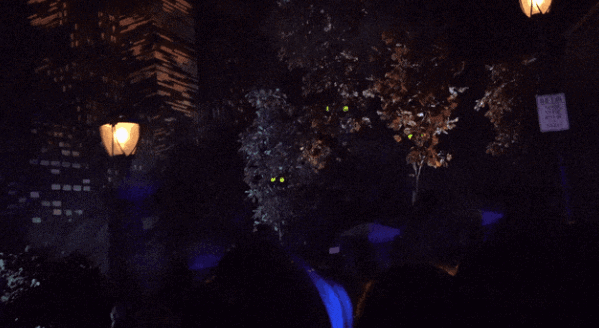 As your vehicle rolls out of the ambush, you will hear Will Smith’s voice delivering a message that will vary based on your score. While he’s talking, you’ll see some eyes lighting up in the trees ahead of you. These are moderately valuable targets, so pick one and light it up as long as you can.

Next, you’ll move into an x-ray checkpoint and find out that the other car is full of bugs. You’ll be instructed to shoot at the exhaust port at the top of your vehicle. This is where you should score most of your points. 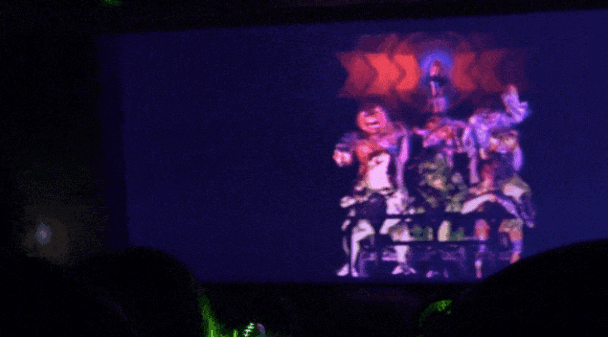 Your gun will make a unique sound when you hit the exhaust port, so you’ll know when you’re on target. Three hits will send the other car spinning out of control but keep in mind; they’re also shooting at you, so your vehicle may start spinning too.

If the other car starts spinning, take a second to jump to any nearby targets but once it stops, go right back to that exhaust port. DON’T STOP SHOOTING THE EXHAUST PORT! As long as it is red, it will continue to give you more points than any other available target. Shoot at it as long as physically possible. If everything goes right, you can hit it ten or more times.

Next, you’ll turn a corner and see Will Smith talking to you from a giant screen, warning you of a big bug. As your vehicle revolves around, you will see the bug right before you as your car heads right for it. This part is essential. You’ll hear Zed instructing you that there’s “only one thing left to do, push the red button!” 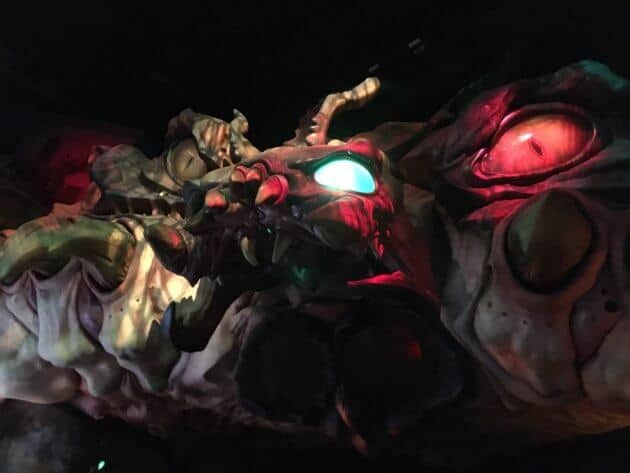 The first player in your vehicle to push the button will receive a 100,000 point bonus! This can make the difference between being the highest score in your truck and being bug bait.

Congratulations! You’ve survived the alien attack. Now you can look down at your score. If you’ve followed this guide, you should be a Galaxy Defender with a bit of luck. 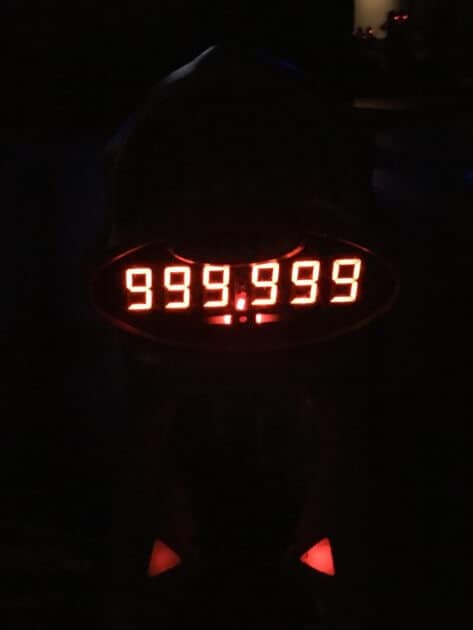 New “Men in Black” movie on the way from “Iron Man” screenwriters, but without Will Smith and Tommy Lee Jones

Was this guide helpful? Do you have any additional tips for becoming a Galaxy Defender? Let us know in the comments below!