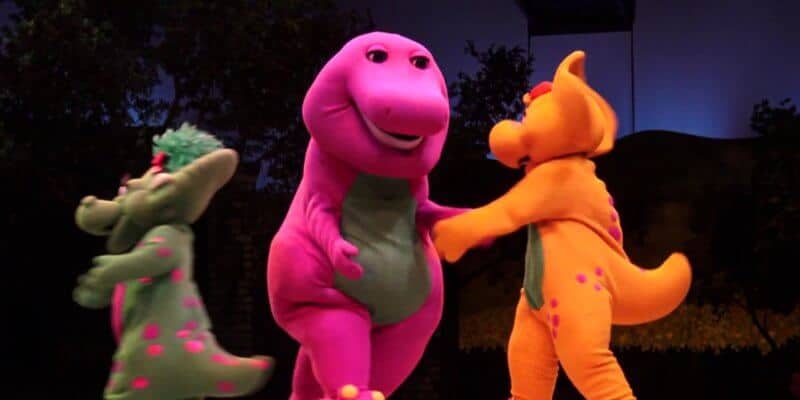 Universal Orlando Resort is home to various entertainment performances for all ages. That being said, the pandemic has changed a few things when it comes to live entertainment, and some shows have had to say goodbye to the Universal stage.

A Day in the Park with Barney is the lovable kids’ show with everyone’s favorite purple dinosaur, and has been around since 1995. However, after 25 years, Barney may have taken his final bow. A Day in the Park with Barney has been gone since Universal Studios reopened after the theme park’s pandemic closure and has been listed as “Temporarily Unavailable” on Universal Orlando Resort’s website.

Now, the list of “Temporarily Unavailable” shows and attractions no longer includes A Day in the Park with Barney. That’s a good thing right? Typically, if an attraction or offering were to come off this list it would be because it was once again available. In the case of Barney, that is unfortunately not the plan. The Universal Orlando site has erased all mentions of the show off their site, so now, A Day in the Park with Barney no longer exists when searched.

Universal has yet to confirm that the show will be leaving the Florida theme park, but by removing every remnant of the show from the site, it is likely that we have seen the last of the purple dinosaur. The show also had the Barney’s Backyard playground area with a chance to meet Barney in a meet and greet session before and/or after the main show in the Barney Theater. If the show is truly gone, it will be interesting to see what eventually occupies that space.

When asked about the Barney show via Twitter, Universal Orlando (@UniversalORL) noted that:

Hello, we are constantly evaluating our guest experiences and at times, we make adjustments. Stay tuned to https://bit.ly/39IValS for updates about the destination.

Hello, we are constantly evaluating our guest experiences and at times, we make adjustments. Stay tuned to https://t.co/MVva42igNA for updates about the destination.

It seems Universal is not ready to fully announce the closure, but by stating they are “making adjustments” it is likely that changes are afoot. Interestingly enough, Universal asks to check back to their site about updates on the theater. Perhaps there is a chance that an announcement will be made about a new offering that will take Barney’s place. That is just speculation, but it would be fun to know that something would replace the show, instead of it just being a ghost theater.

Universal has also recently said goodbye to another popular show that has been around for the past 14 years. Blue Man Group will no longer be performing at Universal Orlando Resort due to the financial constraints brought upon the company from the pandemic.

Since publishing, Universal had reached back out to state that Barney is indeed permanently closed. The company stated:

Hello! Angela here. Reaching back out in regard to your tweet from earlier today, we have received an update that A Day in the Park with Barney has permanently closed at Universal Studios Florida. Stay tuned to https://bit.ly/3tmZkHZ for updates about the destination.

If you want to watch A Day in the Park with Barney, check it out below!

Are you sad that A Day in the Park with Barney is gone? Do you think it was time for the show to say goodbye?

This article has been updated since publishing