VIDEO: Cast Members, Mickey Mouse Bring Back the Disney Magic - Inside the Magic 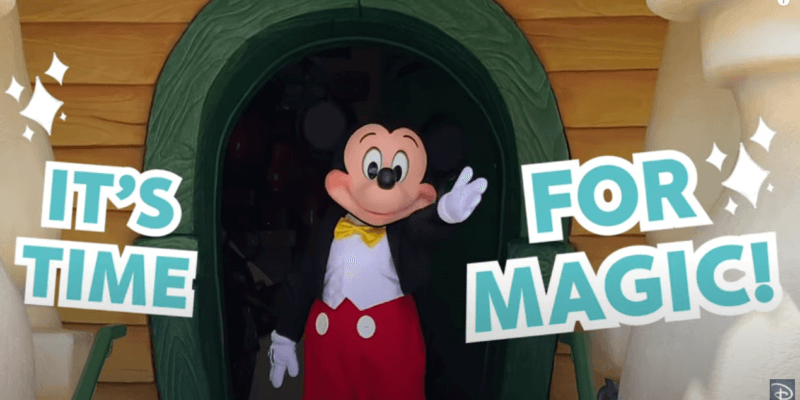 It’s official! Disneyland is reopening after over one full year of being closed. Next week, Disney gets to “tell the guards to open up the gates” to Disneyland and Disney California Adventure as the theme parks welcome back Guests.

To celebrate, Disney has just released a new video to show fans just how excited Disney Cast Members — and Mickey Mouse himself! — are to bring back the Disney magic at Disneyland, the original Magic Kingdom.

Just about a month ago, the news we’ve all been waiting for was shared here: Disneyland Resort theme parks would reopen on April 30. Since then, 10,000 cast members have returned to work to help prepare Disneyland park and Disney California Adventure park for the big day, from refreshing the colorful spring flowers and paintwork to testing attractions, stocking up new merchandise and firing up the kitchens to serve tasty eats and treats once again.

While our cast members have been hard at work these last few weeks, they will also get the chance to be some of the first guests back in the parks to experience the magic during soft opening days next week.

Now, it’s time. As we get ready to open the gates once again, take a look at how ready our cast members are to bring back the magic.

Take a look at the heartwarming video below, which shows Cast Members from around the theme parks as well as attractions we know and love. As the video says, it’s time to “protect the magic,” “maintain the magic,” and “bring back the magic” to Disneyland.

Disneyland Park and Disney California Adventure Park reopen to the public on April 30, and already reservations are going fast. It’s clear that Guests are excited to return to the Happiest Place on Earth — and the Cast Members are, too! We know that when Disneyland reopens, there will be some new policies in place (such as limited attendance, face mask requirements, social distancing, and more), but all in all, it’s clear that people all around the world are thrilled about this historic reopening of Walt Disney’s original theme park.

Remember that if you plan to visit Disneyland and Disney California Adventure, a valid theme park ticket and theme park reservation are required. The Southern California Disney Parks are only admitting California residents at this time. Disney’s Grand Californian Hotel & Spa will reopen one day before the theme parks on April 29 — the other two on-property hotels (Disneyland Hotel and Disney’s Paradise Pier Hotel) remain temporarily closed at this time. The Downtown Disney District is open. You can view the latest information on operations on the Disneyland Resort website here.

Are you visiting Disneyland on reopening day? Let us know in the comments below!

The Authorized Disney Vacation Planners at Academy Travel are experts on all things Disney Parks. Click here to book a vacation to the Happiest Place on Earth, where dreams come true!

Comments Off on VIDEO: Cast Members, Mickey Mouse Bring Back the Disney Magic