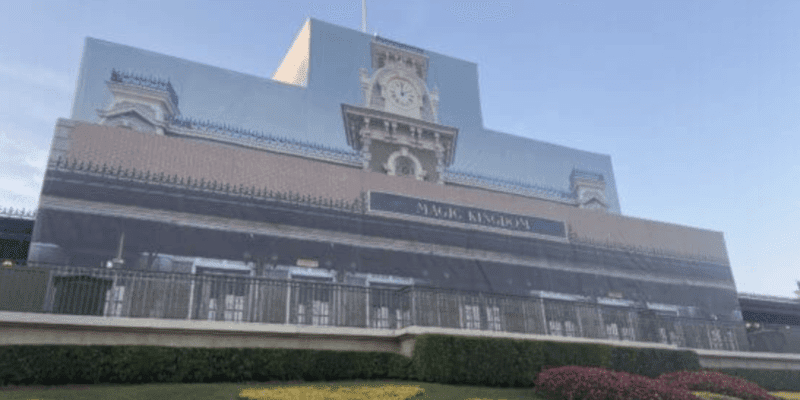 Trains were such an important part of Walt Disney’s life. Influences from Disney’s passion and love for trains can be found even today at Disneyland Resort and Walt Disney World Resort.

For example, Disney World Guests are welcomed by the sights and sounds of the Walt Disney World railroad at the entrance in Magic Kingdom.

Personally, I feel this is one of the most relaxing and eye-catching attractions Magic Kingdom has to offer. Walt Disney’s locomotive sends you on a magical ride through Adventureland, Frontierland, Tomorrowland, and Fantasyland and can be a perfect way to unwind after a long day at the Park.

The Walt Disney World Railroad closed in December 2018 and does not have an official reopening date at this time. Last month, while visiting Magic Kingdom, the ITM team noticed that Disney World workers were placing new tracks around Big Thunder Mountain.

Main Street, U.S.A. has been hiding under scaffolding for some time now as Disney continues to work as efficiently as possible amid other construction projects, such as the new TRON Lightcycle/Run roller coaster in Tomorrowland.

Inside the Magic visited Magic Kingdom this week and we noticed that some caution tape and new track components are being installed near the WDW Railroad’s Fantasyland station (plus, a bonus view of TRON construction!)

Disney’s clever scaffolding is covered with images of the Disney World train station, so first-time visitors can still see what the iconic building is supposed to look like. As previously stated, Disney has not announced details of when the Railroad will reopen.

Perhaps once the sign is once again unveiled on Main Street, U.S.A., it will be a positive sign that the Disney World Railroad refurbishment is nearly complete and almost ready to ride once again.

Although there has been no official word from Walt Disney World as far as an opening date, we will inform you of all the Railroad updates as soon as we get information!

In the meantime, if you are looking for a relaxing way to end your day at Magic Kingdom, you can check out other popular  attractions such as “it’s a small world”, Pirates of the Caribbean, Walt Disney’s Carousel of Progress, and Under the Sea – Journey of the Little Mermaid.

Do you ride the WDW Railroad when you visit Magic Kingdom? Let us know in the comments below how you end your day at the park!

Planning a Disney World vacation and need some help? Our friends at Academy Travel are EarMarked Diamond and can make your next Disney trip magical! Click here for more information!