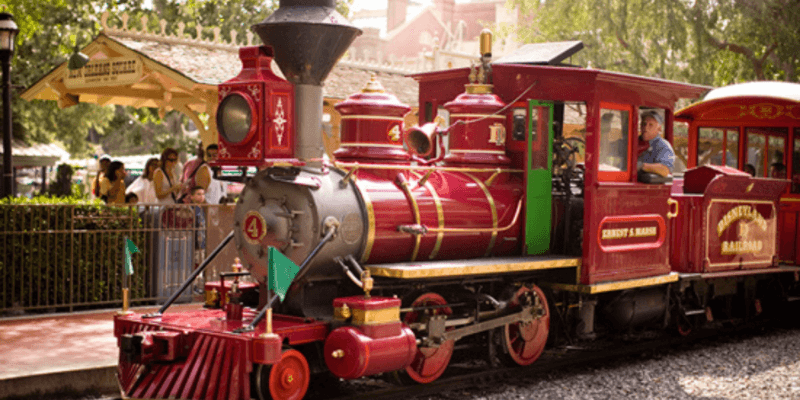 Disney Guests visiting the Disneyland Resort in Anaheim, California, heard that beloved bell and whistle of the classic Disneyland Railroad as one of the park’s trains made a special appearance this afternoon.

Disney fan Paul from @paulsthemeparkadventures shared on his Instagram account a video of the Ernest S. Marsh steam engine passing pulling into the Main Street USA station on Tuesday morning.

We just saw the Disneyland Railroad inside of Disneyland being tested! So magical!

Disney Parks even shared some footage to TikTok:

For over a year, Disneyland has remained as quiet as a mouse, but this morning those beloved train whistles and bells were heard throughout the Esplanade as Disneyland and Disney California Adventure Park prepare for their official reopening on April 30th.

Disney fans are losing it over this sighting, as though the Disneyland train is a star in its own right.

Once the Ernest S. Marsh locomotive pulls into the Main Street USA station, you can see Cast Members checking and prepping the cars behind that beautiful locomotive for a magical ride this April 30th.

One of five steam engines, the Ernest S. Marsh is one of the most popular locomotives at the Disneyland Resort. The park’s famous circle grand tour of Walt Disney’s original magic kingdom has been a fan-favorite since Disneyland Park’s opening on July 17, 1955. Making around trip with stops at New Orleans Square, Mickey’s Toontown, Tomorrowland, and Main Street USA, the train is as beloved and popular as Sleeping Beauty Castle.

The man himself, Walt Disney, poured his passion for model steam engines into his Disneyland Railroad, and to this day, you can still feel his love for these trains.

After all, the Disney theme park sprouted from Walt Disney’s idea of owning his own locomotive and railroad — a dream he held onto since his childhood in Marceline, Missouri. Once his dream of having his own life-sized train became a reality, he decided that his steam engines should circle a park where children and parents can have wholesome fun together.

Los Angeles locals Best Life and Beyond posted a fantastic video documenting the trains returning to this famous Disney Park. You can watch it below:

Disney fans are ready to revisit the Happiest Place on Earth, and the Disneyland Railroad being tested highlights Disney’s excitement to welcome their beloved Guests back into Walt Disney’s original magic kingdom.

The Disneyland steam engines join the numerous attractions testing throughout the Disneyland Resort as Cast Members retrain on operating fan-favorite attractions and ensure they’ll be operational on April 30th. As Southern California and Orange County begin lifting restrictions due to COVID-19, the California theme park and accompanying resort hotels will welcome more guests back to the magic.

On April 12, Guests with existing valid theme park tickets can begin making their park reservations, and theme park ticket sales will resume on April 15. We can’t wait for the magic return to the Disneyland Resort, and the trains are ready to take Guests on magical round trips again!

Are you excited to go on the Disneyland Railroad again? Let us know in the comments below!

Comments Off on Disney Tests Disneyland Railroad Ahead of Parks Reopening!