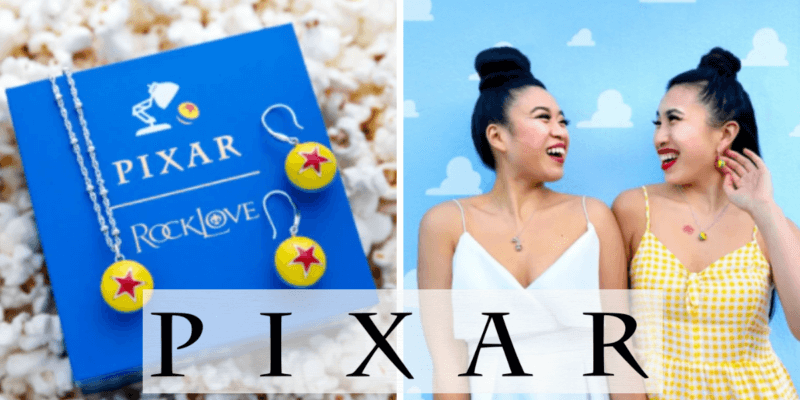 When it comes to Disney-Pixar, there’s always a new way to flaunt your Disney style! And, you can always count on RockLove Jewelry to bring Disney fans new, amazing pieces of pop culture heaven. Now, RockLove and Disney have done it again. You can show off your Disney-Pixar fandom with classic Pixar icons! That’s right. You can purchase some fantastic Pixar jewelry rom this new series in the Pixar x RockLove collection. Let’s take a look at some of these new pieces. They might fly off the shelves before the Pixar lamp can crush the “I.”

Who knew a lamp could be so cute? Bring back your childhood memories as you sport this Pixar necklace. Reminisce about a simpler time when you could watch your VHS copy of Toy Story as you snacked on popcorn and candy in your Disney sheets blanket fort. I can hear the squeaky jumping noises of the Pixar lamp just looking at this necklace. It will match any outfit since its charm and chain are made of sterling silver with neutral silvery tones. It also actually moves! You can adjust the lamp to bend into many positions, so it can “look” at the Pixar call or up at you!

Imagine wearing this to Disney’s Hollywood Studios on a trip to Toy Story Land. You could accessorize a Pixar Disneybound with this necklace on your next visit to Pixar Pier at Disney California Adventure as well. Be inspired by the adorable innocence of Pixar’s signature lamp. Just don’t accidentally crush any giant capital I’s.

Want to channel some classic, colorful Pixar vibes? This Pixar ball necklace would look great in your jewelry collection. The necklace is made out of sterling silver as well, but with colorful accents. The Pixar ball pendant shines with bright primary red, blue, and yellow in premium enamel. This is definitely my favorite piece in the collection.

Love a good Instagram moment? Toy Story fans could wear this necklace to Toy Story Land for a photo-op right in front of the giant Pixar Ball near the exit of Toy Story Mania! You could also wear this to a nice night-in Pixar movie marathon with friends. Watch Coco or Onward, searching for Easter eggs like the Pizza Planet truck in each scene. You will already be wearing the best Easter egg around your neck with this Pixar jewelry piece.

Will you rock Pixar x RockLove’s Pixar Ball necklace? You can buy this product from RockLove here for $135.

Last, but not least, if you want a matching set of Pixar jewelry, you can order a set of these fabulous Pixar ball earrings. These earrings are sure to add a bold pop of color to any outfit. Not only will you be adding a statement piece to your accessory collection, but you will also be adding an easy way to make any outfit into a Disney outfit. These Pixar ball earrings would look perfect for a date night at the movies or a night out with the girls. You could even wear these to work to show off your Pixar fandom in a subtle, dressy way.

Will you bounce into Pixar fashion with these Pixar Ball earrings? You can purchase your pair from RockLove here for $135.

Do you you love to rock unique jewelry? RockLove is the place where pop culture dreams merge with reality to make all your accessory wishes come true. The Disney x RockLove collection offers so much wonderful merchandise that you can order now! If you love Disney Princess accessories, check out this Frozen 2 RockLove collection. Do you want jewelry that’s “simply meant to be?” Take a glance at this beautiful Nightmare Before Christmas RockLove collection, inspired by Sally!  Are you a fan of Star Wars? Soar over to RockLove for some out-of-this-world Star Wars accessories. There are so many great villain pieces if you find yourself siding with Disney villains more than the heroes. Check out the Disney villain inspired jewelry by RockLove here. If you always have time to run amuck, dash over to this article for a peek at some Hocus Pocus jewelry from Disney x RockLove.

Will you be purchasing any of the incredible new Pixar Jewelry from the Pixar X RockLove collection? Let us know in the comments below!