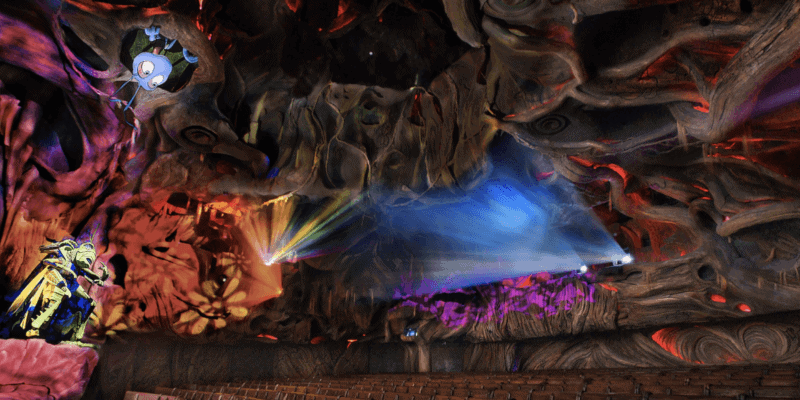 What is the It’s Tough to be a Bug! attraction?

It’s Tough to be a Bug! is a show based on the Pixar movie A Bug’s Life that features both 3D and 4D effects and involves Guests becoming honorary bugs as Flik hosts the show and educates guests on why bugs should be considered friends.

During the show, guests will encounter a number of different bugs including:

Of course, no attraction based on A Bug’s Life would be complete without an appearance from grasshopper villain, Hopper, and you can imagine things get a bit… intense when this happens.

Related: OpEd: Why A Bug’s Life is Pixar’s Best Movie

The majority of the show takes place on-screen. Guests are asked to wear a pair of “bug eye” glasses (3D glasses), while 4D elements include smells, water effects, and a few other surprises that we won’t spoil. The show also features some pretty awesome audio-animatronic figures of both Flik and Hopper.

When did It’s Tough to be a Bug! Open?

It’s Tough to be a Bug! opened with Disney’s Animal Kingdom on April 22, 1998 and it has remained (relatively unchanged) ever since.

The attraction opening in April 1998 actually meant that it was open and available to Guests before the movie had even released. A Bug’s Life was released in November of the same year.

The History of It’s Tough to be a Bug!

Around 12 months before the opening of Disney’s Animal Kingdom, Imagineers made the decision to place a show inside the Tree of Life. There was a lot of conversation about what to do and the team couldn’t reach an agreement. Initially, the plan was to consider a show involving Rafiki from The Lion King, in which he would take Guests on a journey through the natural world, telling stories of some of the creatures that are carved into the tree.  This idea later resurfaced when Tree of Life Awakenings made its debut. Rafiki would, of course, still make several appearances in the park in both Rafiki’s Planet Watch and the various parades that have appeared over the years.

This idea for a Rafiki show inside of the Tree of Life, though, was scrapped when Michael Eisner — Disney’s CEO back in 1998 — suggested a tie-in with Pixar’s upcoming movie, A Bug’s Life. The show was originally due to run for around 12 minutes, but a scene was deleted that involved interspecies dating between a black widow spider, a praying mantis and a jumping spider (all species known for eating their mates).

A little known fact about the attraction, is that Andrew Stanton, director of Finding Nemo, actually voices Hopper in the show, taking the place of Kevin Spacey, who voiced the villainous bug in the movie!

Where to find It’s Tough to be a Bug!

Better yet, the queue for the attraction winds around the entire tree, so you can get a close-up view of the intricate animal carvings that aren’t visible from other locations. We’d actually rate this queue among the best in all of the Walt Disney World Resort. It really is a joy to walk through and there are plenty of great photo opportunities of the Tree of Life that you cant get from anywhere else.

Showtimes for It’s Tough to be a Bug!

The good news is that It’s Tough to be a Bug! doesn’t operate like a typical show at Walt Disney World. Instead of occurring at scheduled times, shows are continuous. This is because there are no Cast Members involved in the performance, so there is no requirement to take rests between shows. As one show begins, Disney will already begin filling the Tree of Life for the next performance. You can walk up at any time of day to get into a performance of the show.

Planning Your Visit to It’s Tough to be a Bug!

As guests entering Disney’s Animal Kingdom tend to rush towards Pandora – The World of Avatar (usually for Avatar Flight of Passage), DINOSAUR, Expedition Everest or Kilimanjaro Safaris as a first stop, It’s Tough to be a Bug actually tends to be pretty quiet at the start of the day.

There’s usually a period over lunch where the attraction gets busiest, around 11 a.m. to 2 p.m. and then crowds tend to drop off again toward the late afternoon and into the early evening. This peak in the middle of the day is largely due to Guests hitting all the big attractions first and hitting It’s Tough to be a Bug later in the day.

How Popular is the It’s Tough to be a Bug! show?

Despite being open for over 20 years, It’s Tough to be a Bug! usually has a relatively full show. That being said, most of the theater is filled up during the last few minutes and Guests rarely have an issue with getting a decent view of the show. Even during busy times of the year, you shouldn’t have any issues with fitting It’s Tough to be a Bug! into your day.

**Warning – A few spoilers for the show ahead**

So, what about the 4D effects? There are actually plenty of these in the show and, in combination with the 3D, there are many moments that can be pretty scary to small children. These moments include:

Parents should be aware of this prior to taking little ones into It’s Tough to be a Bug!, though it is an all ages attraction.

How long does the It’s Tough to be a Bug! Show Last?

Each experience in this Animal Kingdom show lasts for nine minutes.

Does It’s Tough to be a Bug Have FastPass?

Yes, It’s Tough to be a Bug! does offer FastPass but we wouldn’t recommend worrying about getting a FastPass reservation for this attraction. You’ll hardly ever need to queue to view the show and would most likely be wasting one of your selections, even during busy times of the year.

Most of the time you will only be waiting for the next show to start so FastPass+ isn’t worthwhile.

Accessibility Information for It’s Tough to be a Bug!

This attraction is very accommodating for guests that have accessibility requirements. Guests are able to remain in a wheelchair for the entire experience though it should be noted that due to the nature of It’s Tough to be a Bug!, Guests with service animals should check with a Cast Member at the attraction for more information.

Is There a Height Requirement for It’s Tough to be a Bug?

The good news, there are no height restrictions for It’s Tough to be a Bug! As we’ve already mentioned, you must be aware that this attraction does sometimes frighten small children. You know your children best, so you will have to decide if it is appropriate for your family!

What Happened to It’s Tough to be a Bug! in Disneyland?

It’s Tough to be a Bug! featured in A Bug’s Land in Disney California Adventure when the land opened in 2002 but the attraction opened back in 2001 when the land was known as the “Golden State”.

A Bug’s Land featured several attractions in addition to It’s Tough to be a Bug! They included:

It’s Tough to be a Bug closed alongside the rest of A Bug’s Land back in 2018 to make way for the upcoming Avengers Campus.

Did we answer all of your questions about It’s Tough to be a Bug? Let us know if you have any further questions in the comments below and be sure to share your thoughts on the attraction!

Comments Off on Everything You Need to Know About It’s Tough to be a Bug!