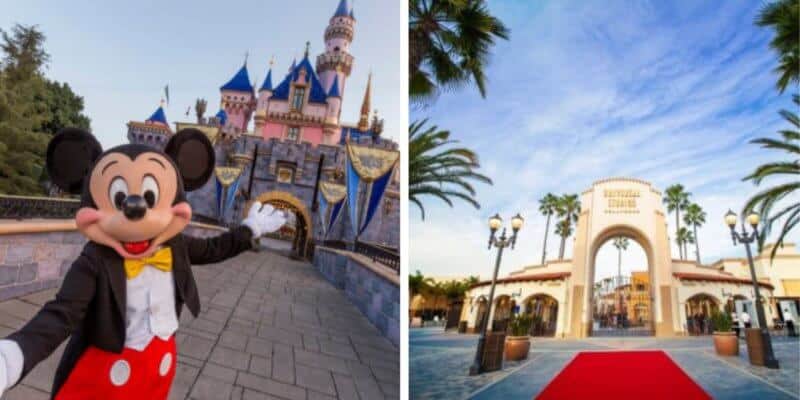 Disneyland Resort and Universal Studios Hollywood have both had a tough go this past year, with the COVID-19 pandemic sweeping the world and heavily hitting the state of California, leaving the California theme park destinations closed for over a year.

Now, however, it seems that things are looking up! California Governor Gavin Newsom adjusted the Blueprint for a Safer Economy to allow theme parks to reopen in April as long as the county in which each park is located reaches tier 2. Following this news, Disneyland Resort announced a reopening date of April 30 after their current A Touch of Disney event concludes. Universal Studios Hollywood has yet to announce a reopening date, but we expect to hear more news on their plan soon, especially since the Taste of Universal event is ongoing.

Tier 2, the red tier, allows the theme parks to reopen with a 15% capacity to California residents only. Considering Disneyland is known to welcome mostly locals on a regular basis, and considering the robust Annual Passport program that Disneyland Resort had in place before ending it earlier this year, that 15% is expected to fill up very quickly due to such high demand. That being said, there is a way that Disneyland and Universal may reopen to 25% capacity — and it looks like they are on track to make that happen this spring.

If Disneyland Resort were to reopen at 25% capacity, Orange County would have to reach tier 3, the orange tier, before the reopening date arrives. The same applies to Universal Studios Hollywood in Los Angeles County.

Most recently, Deadline reported, “Six Northern California counties with a population exceeding 3 million moved from the Red to the Orange tier of the state’s reopening plan on Tuesday. They are San Francisco, Santa Clara, Lassen, Marin, Trinity, and Yolo.” Although this does not include the counties in which Disneyland and Universal are loacted, it’s clear that counties across California are making progress to move from tier 2 to tier 3.

At the time of this article’s publication, both Orange County and Los Angeles County are in tier 2, which is what is needed for theme parks to reopen, so long as the counties can hold that tier for two weeks. That being said, it seems that with the decrease in COVID-19 cases and the progress that both counties are making, there is a chance that before April 30, the reopening date of Disneyland Park and Disney California Adventure Park, we could see Orange County settle into the tier 3, orange tier.

Reaching the orange tier requires a county to have an adjusted rate of 3.9 or fewer new coronavirus cases per 100,000 people each day, a test positivity rate of under 5% and a health equity metric of less than 5.3%. L.A. and Orange counties have checked all those boxes, state data show. Their most recently calculated adjusted case rates were 3.7 and 3.5, respectively. Amusement parks — which can open starting April 1 in red-tier counties — would be allowed to expand their attendance to 25% capacity.

Counties must log two straight weeks of qualifying data to advance to a less restrictive tier and have to stay in a tier at least three weeks before moving again.

What would this mean for each respective county?

Unfortunately for those out of state, Disneyland Resort and Universal Studios Hollywood would still only reopen to California locals only, per the theme park reopening guidelines. But as we previously mentioned, the Southern California theme parks tend to draw in mostly locals on a regular basis, and there is a lot of pent-up demand for Disneyland and Universal that many predict the parks will hit capacity regularly.

As San Francisco has now entered the orange tier as of today, District 6 Supervisor Matt Haney (@MattHaneySF) Tweeted exactly what this would mean for the county, which could be translated to both Orange County and Los Angeles County when they can achieve the orange tier. Take a look:

Here’s what it means:

Bars can open outdoors w/o food.

Offices & conference rooms can open at 25%.

Expanding indoor dining to 50% capacity (from 25%)

Here's what it means:

Bars can open outdoors w/o food.

Offices & conference rooms can open at 25%.

Expanding indoor dining to 50% capacity (from 25%)

And although Haney did not specifically mention what reaching tier 3 means for amusement parks and theme parks, note that, as we shared, tier 3 status also means theme parks can operate at 25% capacity instead of 15% to 25%. Of course, we do not know if Orange County will hit the orange tier before April 30, but the possibility means that Disneyland could reopen to even more Guests than anticipated, allowing the California theme park destination to sell more Disney tickets and welcome back more Guests when they reopen the gates.

Considering A Touch of Disney which is currently being hosted on select dates at Disney California Adventure sold out within hours, we can only imagine what the demand will look like once both Disneyland Resort theme parks are both operating with attractions, whether that means they reopen at 15% capacity in tier 2 or 25% capacity in tier 3, depending on what tier Orange County is in by April 30.

Note that the reopening announcement for Disneyland Resort still indicates that the parks will reopen to a limited capacity will California residents only. Stay tuned to Inside the Magic as we continue to track what Disneyland’s reopening will look like, and when Universal Hollywood will announce their return!

Would you feel comfortable going to Disneyland or Universal at 25% capacity? Do you think Orange County and LA County will reach tier 3 status soon? Let us know in the comments.

Comments Off on Disneyland, Universal May Open to Higher Capacity Than Expected