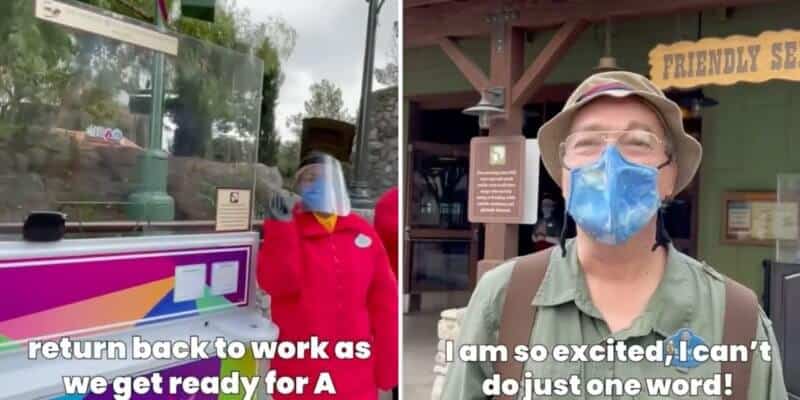 It has been a long and difficult year for Disneyland Cast Members. But, finally, they have seen the light at the end of the tunnel.

Disneyland Resort will be officially reopening — with limited capacity and numerous health and safety protocols — on April 30, 2021. And, today, the limited-time A Touch of Disney event began at Disney California Adventure Park!

The ongoing pandemic caused many to lose their jobs, and this heavily affected The Walt Disney Company. Tens of thousands of Cast Members were let go due to the financial strain the pandemic caused. This was amplified in California since theme parks were unable to reopen for over a year. That being said, things have taken a turn for the better, and now, many Cast Members have returned to making magic!

As we mentioned, the sold out A Touch of Disney event has officially begun at Disney California Adventure, and although DCA and Disneyland cannot officially open with attractions until after the event has concluded, Cast Members are back in the parks making magic.

The Disneyland Resort Ambassador Instagram account (@disneylandambassador) recently put out a video of Cast Members explaining one word of how it feels to be back working at Disneyland with Guests flowing through the park. Words such as amazing, encouraging, happy, finally, and hopeful were used by some, and one Cast Member exclaimed, “I am so excited I can’t do just one word!”. To watch the full video, click here!

The joy on their faces to be back at work for the Mouse is a hopeful reminder that things are starting to return to normal at Disneyland, even if it is slow going!

When Disneyland’s official reopening announcement dropped this week, Disneyland fans and Legacy Passholders alike were filled with excitement at the prospect of returning to the Happiest Place on Earth. After a year of visiting just Downtown Disney (and by extension, Buena Vista Street), Guests will finally be able to once again interact with Cast Members, see their favorite characters, and snack on a Disneyland corn dog — before instantly regretting the decision on the Incredicoaster.

As it stands, Disneyland Resort will reopen to a 15% capacity, and it will only allow California residents to enter, but as the COVID-19 cases improve in Orange County, those restrictions could change in the coming months.

Are you planning on returning to Disneyland this year?