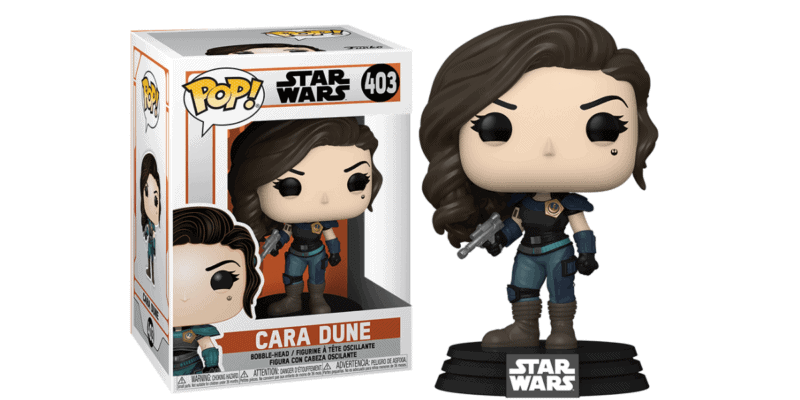 In the wake of the firing of Gina Carano from the award-winning Disney+ series, The Mandalorian, Hasbro, and other manufacturers have canceled their future production of Cara Dune merchandise, which has essentially made the merchandise depicting Carano’s character limited edition or collector’s items, even if some items did not start that way.

Another piece of Star Wars merchandise for Gina Carano’s Cara Dune has been canceled after the actresses’ split from Disney/Lucasfilm in February. Online retailer Entertainment Earth sent out emails to customers who preordered the new Star Wars: The Mandalorian Cara Dune Funko Pop!, stating that it would not be shipped this summer and all orders of the Cara Dune bobble-head figurine were canceled.

According to The Direct, Entertainment Earth stated the following:

“Unfortunately, we’re sorry to report that the manufacturer has notified us that we will not be receiving any additional shipments of the Star Wars: The Mandalorian Cara Dune Pop! Vinyl Figure (Item FU42065) you ordered because they have discontinued production of this item. No additional information was provided to us by the manufacturer as to why this occurred. Sadly, that means we will not be able to ship it to you and have canceled it from your order. We apologize for any inconvenience this causes.”

Following controversy over the Deadpool actress and Women’s MMA fighter on Twitter and social media, Lucasfilm officially departed from Gina Carano and canceled her future involvement in the second season of The Mandalorian and upcoming Star Wars Universe projects, such as Rangers of the New Republic.

This would have marked the second Funko Pop! inspired by Cara Dune, on top of numerous collectible action figures, apparel, and accessories all canceled or stop from being further produced. Both Funko and Hasbro confirmed the cancellation of their respective Cara Dune merchandise.

Since merchandise for Gina Carano’s popular Star Wars character is no longer being produced, this essentially has made all Cara Dune products collectors’ items. Many Mandalorian fans are vying to grab their own piece of Cara Dune memorabilia, but it’s become a challenge.

Gina Carano’s Funko Pop! is going for a pretty price on eBay and other retail sites, with some postings reaching up to $100. A listing of the Star Wars Black Series Cara Dune collectible figure is nearly $300 on eBay, signifying the high demand and little supply of Cara Dune merchandise.

Gina Carano’s popularity surged previous to her departure from Lucasfilm. Still, after the events that transpired amid her firing, the actress experienced a boom in popularity that resulted in fan-led efforts to get the actress rehired.

Earlier this month, when asked if there were any political motivations behind Carano’s firing, Disney CEO Bob Chapek stated the following:

“I don’t really see Disney as characterizing itself as left-leaning or right-leaning, yet instead of standing for values, values that are universal, values of respect, values of decency, values of integrity and values of inclusion and we seek to have the content that we make reflective of the rich diversity of the world we live in. And I think that’s a world we should all live in harmony and peace.”

There are no signs of Gina Carano getting her role as Cara Dune back soon, solidifying the rarity of any and every piece of merchandise that features the prominent Star Wars character. It’s predicted that her character’s merchandise’s value will only accrue over time and remain scarce as both Disney/Lucasfilm and Gina Carano have parted ways. It doesn’t look as though more Cara Dune merchandise will be produced again.

If you’re fortunate enough to own a piece of Cara Dune merchandise already, consider yourself lucky! From now on, it seems as though it’ll be as tough as nailing a Womp rat on Tattooine to get a Cara Dune Funko Pop!

Do you own any Cara Dune merchandise? Let us know in the comments below!