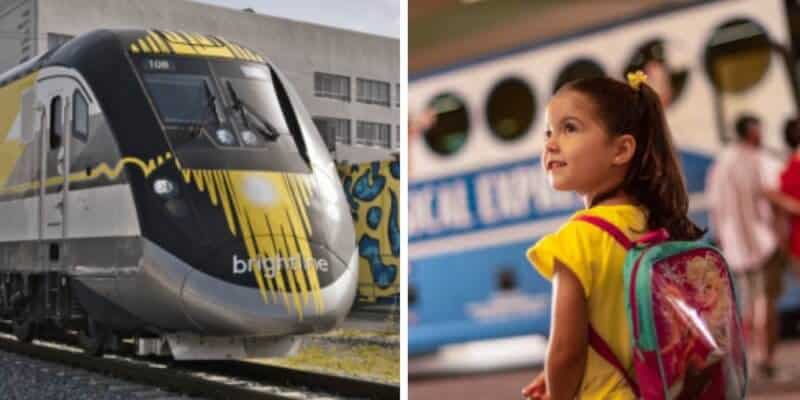 Although Disney has already planned to end their complimentary Magical Express service in 2022, now, one of the possible solutions for Guests who need transportation to and from MCO when traveling to Disney World is experiencing a major delay.

Brightline is adding in a new high-speed train that will run from Orlando International Airport to Disney Springs. The new train (although not owned or operated by Disney) would be a great solution for Guests to travel to Disney World property without having to use a ride-share service once the Magical Express was gone, especially considering its debut was originally set for 2023.

As we previously mentioned, that debut has now been pushed back to 2026, adding an extra three years to the new transportation system. The Orlando Business Journal recently noted, “The route to Disney from Orlando International Airport would cost $1.03 billion-$2.1 billion, depending on which alignment is selected, and the company hopes to start service on the segment as early as third-quarter 2026.”

This means that Guests will likely not be able to use the new 17-mile transportation system until the fall of 2026, which makes this delay almost add up to four years.

Disney’s Magical Express has been a complimentary service that all Disney World Resort Guests have been able to take advantage of for years. The Disney-themed bus would transport Guests and their luggage to their Disney Resort leaving Guests stress-free when it comes to figuring out how to get to Disney. With Magical Express ending at the end of 2021, Disney fans have been racking their brain for what other options will be available to them in the future.

Although many suspect Disney will announce a replacement service, Disney has yet to mention anything of the sort. So, for now, it seemed that Brightline’s new train would be the best solution. If it dropped off at Disney Springs, Guests could just hop on their appropriate bus to head to their resort. That being said, this idea is purely speculation at this point. Now, however, that option will not be available until years after Magical Express has concluded.

So, it seems that for now, Guests who are not renting a car will likely be using ride-share services to shuttle themselves to Disney World once Magical Express ends.

Once the Brightline track is complete in a few years, Guests will be able to explore Tampa Bay, West Palm Beach, Kennedy International Space Center, and more — all from Disney Springs!

How do you plan on transiting to and from MCO on future Disney World vacations?