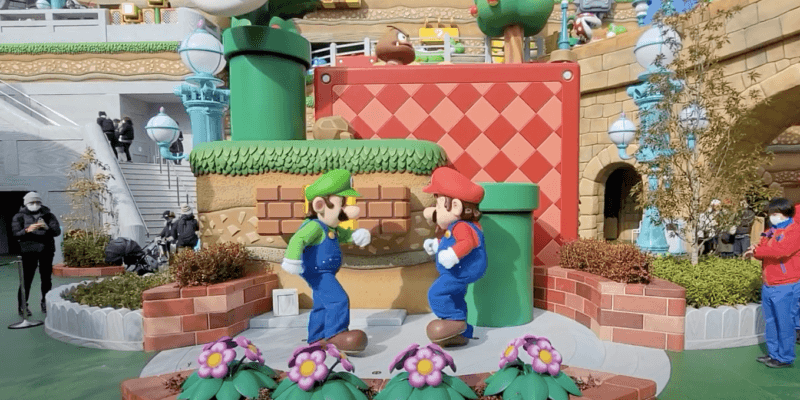 Super Nintendo World has been long-awaited by many Universal fans. The first Super Mario inspired land has found its home in Universal Studios Japan and, now, we can officially take a look inside!

Although Super Nintendo World had to delay its grand opening due to the current COVID-19 surge in Osaka, the social media embargo was officially lifted as of today, February 4, 2021 (Japan Standard Time). Previously, Super Nintendo World not only had previews of the land, but also underwent a soft opening where select guests were able to tour Universal’s newest immersive land. Please note that Super Nintendo World is not currently officially open to Guests.

YouTuber Maction Planet was on the scene for one of the preview events and captured content of the entire land as a whole — and it looks like Universal somehow created a real-life cartoon video game world that guests can step into. Even the manholes leading up to the entrance of the land are shaped like coins! If this is what the exterior of the land looks like, imagine what happens when you can actually enter the Warp Pipe!

As Maction Planet entered the land, Universal Team Members’ enthusiasm seemed to be top-notch. Everyone involved in this project has clearly taken great pride in it, which seemingly only served to enhance the overall excitement and immersion.

Universal’s recently introduced Power-Up Bands can be purchased at the entrance of the land, so that guests can begin the interactive elements from the moment they enter Super Nintendo World. As a reminder, the Power-Up Bands are a way for guests to play their own Nintendo video games while they are in the land. You can collect coins, compete in challenges, and have a final face-off in the end — but it will come at a cost.

Upon arrival, Maction Planet was gob-stopped at the immersive feeling that the land posed. Heading right into Koopa’s Challenge, the Mario Kart AR ride queue brought him into Bowser’s castle. Filming on the attraction was not allowed, but Maction noted that he was not able to even describe the attraction and that it was not what he was expecting.

Yoshi’s Adventure is a slow-moving attraction that we have yet to see until today! Every angle of the attraction gave riders lots to look at, including all the colors and characters that are familiar from the Super Mario franchise.

Maction was also able to meet Mario, Luigi, Toad, and Princess Peach — all of whom look like they just stepped out of a Nintendo game.

Do you think that Super Nintendo World lives up to the hype? What is your favorite aspect of the land?