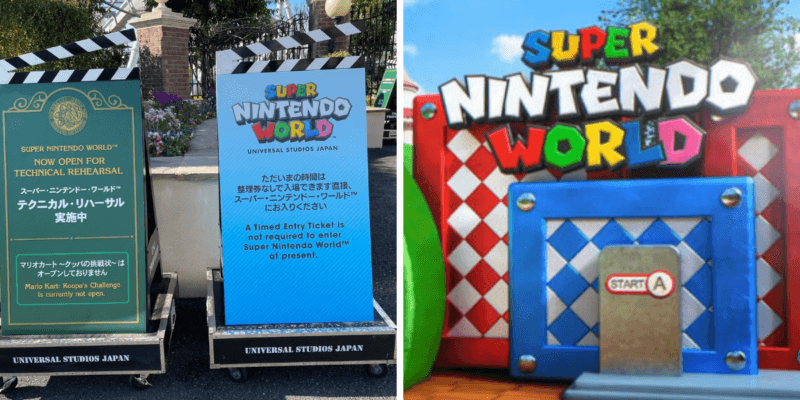 Super Nintendo World is a brand-new land expansion coming to Universal’s Osaka Japan theme park resort. This highly anticipated land was originally set to open on February 4, 2021. However, we recently reported that due to the ongoing pandemic, Universal decided to indefinitely delay the grand opening. Surprisingly to fans and avid followers of the Universal theme parks, Universal Studios Japan opened up Super Nintendo World up today, January 18, 2021, as a soft opening for Guests!

This information comes to us via social media as a park guest and theme park reporter @jotaku150 confirmed the soft opening and stated that Mario Kart will not be operational for Guests during this time.

You can see the note about Mario Kart is translated in both English and Japanese, really hitting home for all Guests that Mario Kart: Koopa’s Challenge is not available. Additionally, the signage adds that you do not have to have a Timed Entry Ticket, or reservation, in order to enter the land, as this is currently a technical rehearsal.

Here is another sign that was placed in the park that lets Guests know that this is a technical rehearsal and no pictures or videos are not to be posted online until the land has its official grand opening. Could this hint that the grand opening is coming sooner than Universal previously indicated? We will have to wait and see.

The images below are from Universal fan @chizuoo2 on Twitter.

We cannot wait to get more details about Super Nintendo World, and hopefully a new grand opening date soon!

Can’t wait for Super Nintendo World to open? We have all the details of the land with official sneak-peek pictures here!

Are you excited about the soft opening of Super Nintendo World? Let us know in the comments!

We can help you plan the perfect Universal vacation so you can experience Super Nintendo World yourself! Click here for more information