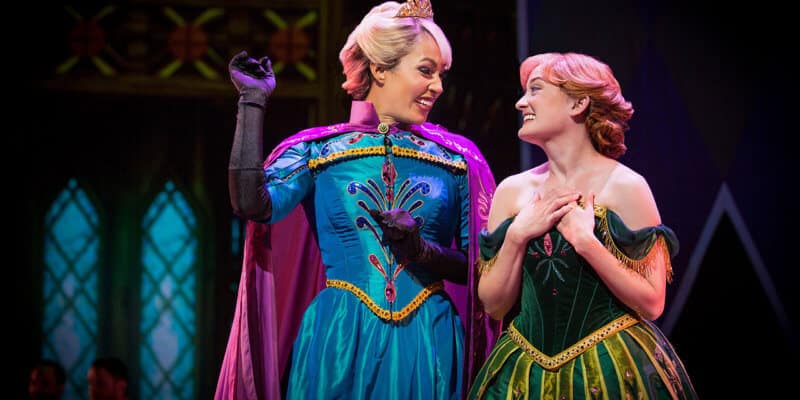 Who’s missing the shows at the Disneyland Resort theme parks or any of the Disney Parks for that matter? I see you raising your hand behind the screen there. Don’t worry, because you’re not alone! It’s been quite some since we’ve been able to enjoy entertainment like shows and parades at the Disney Parks.

It hit quite hard at the Disneyland Resort when end-of-run notices went out for Frozen Live at the Hyperion and Mickey and the Magical Map — especially with the uncertainty of the theme parks’ reopening timeline. That poses the question, what could replace these shows when the time came to welcome back entertainment?

Well, EnterpriseGuy52840 took this to Reddit to ask fellow Disneyland fans, “If Disney gave you the choice to replace Frozen Live at the Hyperion with something else, what would you replace it with? Personally, I would go with bringing back Aladdin, but that’s me.”

Frozen Live at The Hyperion

There’s still a chance that Frozen Live at The Hyperion can actually make it back to the Hyperion. It wouldn’t be the first time we’ve seen end-of-run notices go out and those shows being brought back at a later date. This show has been running at Disney California Adventure since 2016, and there still is a possibility that it can return just as the touring Frozen Broadway show will.

Some fans have loved this show since the start, some are ready for a change, and some want a sequel!

Bring Aladdin Back to The Hyperion?

Quite a few responses have expressed interest that the Aladdin: A Musical Spectacular, which was originally at the Hyperion from 2003 until Frozen Live took over in 2016, should be revived and reclaim the theatre.

This show has a very different vibe than Frozen Live. It seems as though Disneyland fans are lovers of nostalgia, which makes sense as Disneyland Park is the original of all the Disney Parks. An idea would be to maybe add in some of the new music from the live-action Aladdin film that came out in 2019.

Leave it to Disney to always come up with new imaginative ideas, but it seems that Disney fans have interesting ones too!

Aladdin and Frozen Live have both had quite a long run at the Hyperion so maybe it is time for a change, but what would be a good fit to take over? There are some great live shows at Walt Disney World Resort or other Disney Broadway shows that have not debuted at the Disneyland Resort before, but it wouldn’t make them unique to Disneyland. What is unique to Disneyland is its upcoming new land to open at Disney California Adventure, Avengers Campus — so maybe a Marvel show should come to the park?

Some other suggestions include The Lion King, Finding Nemo: The Musical, The Hunchback of Notre Dame. Take a look below at some fan opinions on what show should debut next!

What show would you like to see replace Frozen Live at the Hyperion, or would you bring it back? Share your thoughts with us in the comments below!