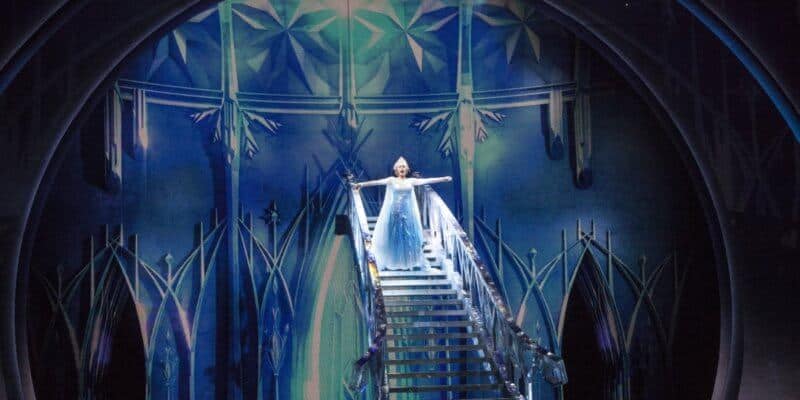 For many Disneyland Resort fans, one of the highlights of any trip to Disney California Adventure Park is, without fail, watching Frozen – Live at The Hyperion.

From the colorful costumes to the fantastic music from the original Frozen movie, Anna, Elsa, Olaf, Kristoff, Sven, and the whole Frozen gang bring a smiles to the faces of young and old.

Unfortunately, however, the unprecedented closure of Disneyland Resort — nine months today on December 14 — has led to the casts of both Frozen – Live at the Hyperion and Mickey and the Magical Map receiving end-of-run notices. As we previously noted, however, Disney has brought back stage shows after sending end-of-run notices in the past, so this doesn’t necessarily mean that these popular Disneyland performances are gone forever.

There is, though, a strong possibility that no live stage shows will return to Disneyland Resort until touring Broadway productions are given the okay to come back to the state of California — including at popular venues such as the Hollywood Pantages Theatre in Los Angeles and the Orpheum Theater in San Francisco.

When Broadway shut down nine months ago, so did the three Disney shows: “The Lion King,” “Aladdin,” and “Frozen.”

So when the news one of those re-opened last week overseas, it was an emotional experience for members of the cast, crew and audience.

The debut of an Australian production of “Frozen” could also help determine the practical procedures required when shows are allowed to resume on Broadway. It will surely find specific ways all involved can be kept safe as the pandemic winds down.

It is important to note that the current COVID-19 situation in Australia and New Zealand is significantly different than it is the United States — New Zealand, in fact, has been declared coronavirus-free.

This is not, of course, the case in the States, where California Governor Gavin Newsom recently instituted a new regional stay-at-home order that has impacted most metropolitan areas, including Orange County where Anaheim — and Disneyland Resort — can be found.

Related: Disneyland Cancels All Dining Reservations Due to New Restrictions

Nonetheless, the return of Disney stage shows anywhere is promising — the sooner Governor Newsom feels like it is appropriate to allow touring Broadway productions to return to California, the sooner it is likely that stage performances will be able to come back to Disneyland Park and Disney California Adventure Park.

There is little doubt that Disney will utilize the health and safety protocols put in-place by their theatrical division to keep performers as safe as possible. According to ABC 7’s report, those precautions are quite intense:

“The biggest takeaway from being here in Sydney, of course, is that we can do it,” Disney Theatrical President Thomas Schumacher said. “It’s possible.”

Possible, he says, with extreme precautions.

“In fact, I said this to the cast last night,” he said. “I quote Shakespeare, ‘Sweet are the uses of adversity,’ because it has brought us together in a way that we have to be united and that we’re taking care of each other and ourselves.”

Upon arrival in Australia, Schumacher was in “military control quarantine for two weeks” in his hotel room. He got meals delivered three time a day but “was without human contact.”

Related: Disney on Broadway to Remain Dark Until Late Spring

The Great White Way in New York City has officially shuttered all performances until the end of May 2021 at the earliest.

Some health officials believe Disneyland Resort won’t be able to reopen until Summer 2021 either, so it is possible that both Disney’s theme park stage shows and Broadway theatrical performances could resume around the same time. Touring productions may be able to begin sooner — Disney on Ice has already begun offering showtimes at select venues around the nation.

What do you think? Will Disneyland be forced to wait until touring stage shows can return to California to bring back live entertainment?