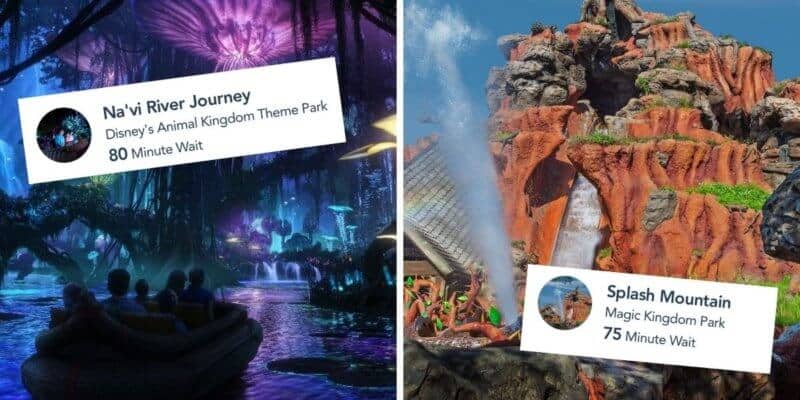 It’s no secret that during the 2020 holiday season, Disney World’s four theme parks saw a lot of crowds, including hitting the limited capacity on several different days during the months of November and December.

With the number of people in the parks, and with FastPass+ still suspended, Guests saw higher wait times at the theme parks — Magic Kingdom, Disney’s Hollywood Studios, Disney’s Animal Kingdom, and EPCOT — than they expected.

Once the holidays came to an end, the wait times started to decrease for the month of January, but come February, and as we inch closer to the springtime, the wait times for Disney Parks attractions are starting to increase once again.

To give you a better idea, earlier this year in January 2020, we reported that some of the more popular attractions at Walt Disney World, such as Pirates of the Caribbean in Magic Kingdom, Soarin’ Around the World in EPCOT, and Star Tours – The Adventures Continue in Disney’s Hollywood Studios all had average wait times that were decently short, all clocking in at about a 15-minute wait each.

Other attractions such as Seven Dwarfs Mine Train at Magic Kingdom, Test Track at EPCOT, and The Twilight Zone Tower of Terror at Disney’s Hollywood Studios, were all averaging a 30-35 minute wait time. This surprised a lot of Guests because on a typical day, these Disney World attractions usually see wait times as long as an hour — or even longer!

Additionally, earlier this month, around February 5, 2021, wait times for attractions such as Mickey and Minnie’s Runaway Railway and Millennium Falcon: Smugglers Run at Disney’s Hollywood Studios as well as Seven Dwarfs Mine Train at Magic Kingdom all sat at an average wait of 45-60 minutes.

Now, as we get closer to springtime, these wait times are continuing to increase. In fact today, February 26, there are a decent number of attractions that are averaging wait times from 40-80 minutes.

As you can see in the screenshots above, the attractions that were sitting at an average wait time of 45-60 minutes earlier this month are now sitting at 60-75 minutes, including Millennium Falcon: Smugglers Run at Disney’s Hollywood Studios and Seven Dwarfs Mine Train at Magic Kingdom.

It is important to note that with new safety measures and social distancing measures, wait times at Walt Disney World can sometimes be unpredictable. Ever since the phased reopening began in mid-July, Disney World has implemented several different protocols at their theme parks — Magic Kingdom, Disney’s Hollywood Studios, Disney’s Animal Kingdom, and EPCOT — in order to operate safely during the pandemic. One of these included social distancing in ride queues.

Additionally, Disney World used to predict the average ride wait times with a red card system, which Guests themselves actually timed. How it worked was a Disney Cast Member would select a Guest at random and handed them a red card. This card clocked how long that Guest waited before boarding. But, with the current pandemic, the red card system is not in place. Therefore, Disney has to estimate the wait time based on the queue, which is also socially distanced.

All of this being said, please keep in mind that if you are visiting the Walt Disney World theme parks in the near future, at this time wait times can be a bit unpredictable. We actually tested how long wait times actually were compared to the posted wait times on our recent visit in January, which you can read more about here.

Do you want to visit Walt Disney World? Are you concerned about the wait times? Let us know in the comments below.