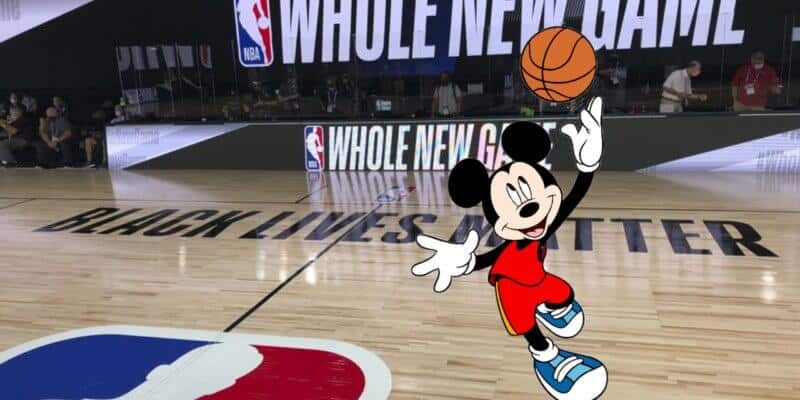 The pandemic has brought about many crazy situations and opportunities to find solutions, especially for Walt Disney World! One of the wildest occurrences was Disney’s partnership with both the MLS (Major League Soccer) and the NBA (National Basketball Association) — but how did those partnerships come to be?

When sports league after sports league began shutting down due to the COVID-19 pandemic, fans across the globe were distraught. Not only were they no longer able to watch their favorite basketball teams (Go Toronto Raptors!) or soccer teams finish the season, but this was happening while the world was going into lockdown and confining people to their home. Suddenly, a huge form of entertainment and distraction was gone.

Then, the news broke that both the MLS and NBA would be continuing their seasons in Disney World, of all places! The Walt Disney Company owns sports-media giant ESPN and Disney World is home to the ESPN Wide World of Sports Complex. At the time the two leagues finalized their plans with Disney officials, the theme park resort remained closed. It was the perfect solution. Players were housed in Disney’s Grand Floridian Resort, Disney’s Coronado Springs Gran Destino Tower, and Disney’s Yacht Club Resort –– and the “Disney bubble” was formed.

But, how did Disney World end up saving sports in 2020? It all started with a phone call. According to Biz Journals, Orlando City Soccer Club CEO Alex Leitao and Faron Kelley, vice president of ESPN Wide World of Sports, runDisney and Disney Water Parks, sat down for a call when Leitao proposed a plan. Kelley’s recollection of the conversation was:

“It was early April, I was working in my yard because we all were all staying at home, and my phone rang. It was my friend Alex Leitao, [the Orlando City Soccer CEO]. He said, ‘Hey, crazy idea. Major League Soccer is looking at creating a campus, a bubble — a single site where where they can bring in the teams and do a tournament. Do you think you can do that?’ And I said, ‘Sure, let’s look at this. Let’s get everybody talking. Let’s get the right people involved.’ Honestly, my first call was to my head of turf management to say we have 16-17 soccer pitches, could they withstand this amount of play over this period of time? He said no, and I said, ‘OK, that doesn’t matter. We’re going to have to figure it out anyway.’ He did miracles, to be honest.

Then, the soccer league’s outside the box thinking inspired the NBA to reach out to Kelley and follow suit. Disney World did have the basketball court to house the NBA, so why not?

“Two weeks later, a similar situation happened. The NBA reached out to Disney and said, ‘Look, we want to try to find an opportunity to create this bubble environment.’ The thing that’s really interesting about this is, unlike so many of us in sports are used to submitting an RFP and bidding for events, this is one of those where the organizations — whether MLS and Disney or NBA and Disney — came together and said ‘We have to figure this out. We have to write the plan as we go.’ We were dealing with totally uncharted waters. No one had ever … done a bubble. The closest thing to a bubble would be the Olympics, where you have the athletes living and playing there. Then, you put it on top of a virus that back in April/May we knew very little about. To try to write health and safety protocols to keep our cast members, players, referees and any staff involved safe — that was a big part of the unknown. So how do we write these protocols, develop an operations plan, layer on top of that broadcast and a broadcast experience with no fans in the stands? That also was new. Were people going to watch an empty stadium? Do you pump in crowd noise; do you not? What is the whole digital fan experience? How do you get the virtual fan piece? All these things were being developed in a matter of days, something that [typically] would take 12-18 months to put together. From the first call from MLS to the players practicing on the fields was 66 days. First call from the NBA to players on the court was 64 days. That doesn’t include the lawyers writing the contracts, which alone should take three times that amount.

“It was a process that, at the end of the day, the spirit was, ‘How do we figure it out?’ It wasn’t a financial exercise; it was ‘we all are committed to bringing sports back.’ There is something to that, from an economic impact to the psyche of the country. That’s our go to, our escape, whether live sports or on television. When that went away, I remember watching the NBA on March 11. That day, when the games were cancelled, it was a gut punch. I said, ‘Wait, this is real now.’

“The economic benefit is think of this as a convention that lasted three months. Benefits to hotels, food and beverage, transportation, and layer on top of that event people and management, broadcast aspects. Even in Central Florida, it allowed Orlando Magic and Orlando City Soccer to keep operations running. It was so multifaceted and literally provided an opportunity for those folks whootherwise wouldn’t have had work. It really got Orlando working in the industry, and it led to other [events] that started to hit.

“It was an amazing journey, and looking back on it … it’s mind blowing what was done. I will say [it was] the effort of a group of people who had a common goal to put sports back on the pitch and the court.”

So, it ended up being the NBA’s idea to officially create the “Disney bubble”, something that has never been done before, and a decision that changed the way we watch sports during the pandemic. As Kelley mentioned, this was the first time a major sports league was brought back to live television, but there was no audience. Disney and the NBA had to come up with the perfect mix of sounds and cheers to keep the “normal” feeling of the game — even though these circumstances were not normal.

Now, whether it be the NBA or other leagues such as the NHL, we can see these same practices being implemented, and it all stems from the choices that were made in the bubble.

And now the bubble lives on! Currently, the ESPN Wide World of Sports is hosting the NBA G League (a smaller league within the NBA), due to the success that came from the 2020 collaboration.

Stay tuned to Inside the Magic as we continue to report on any new sports leagues that are finding a home at Disney World!

Did you watch the NBA or MLS play in the Disney bubble? Did you find that it was a different experience than what you were used to?