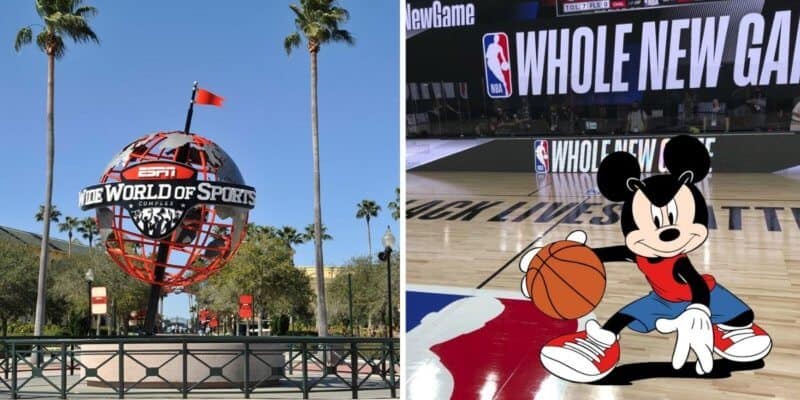 The Disney Parks, like many other companies, had to adapt and learn how to operate amid a pandemic. One thing the company realized was that their resources and property could help others continue to move forward — like allowing the NBA to play within a Disney bubble using Walt Disney World Resort hotels and the ESPN Wide World of Sports complex to finish out their 2020 season.

Now, it seems the success of that partnership is only growing, but this time, there are a lot more Disney Guests around.

Senior lead NBA Insider/Writer/Analyst for The Athletic and Stadium Shams Charnia (@ShamsCharnia) has now officially confirmed that the NBA G League (the National Basketball Association’s official minor league basketball organization) will play out its 2021 season in the Disney bubble.

Official: The NBA G League will play its 2021 season in a bubble environment at Disney World near Orlando in February. The top eight teams will advance to single-elimination Playoff.

Official: The NBA G League will play its 2021 season in a bubble environment at Disney World near Orlando in February. The top eight teams will advance to single-elimination Playoff.

CBS previously reported that the NBA G League was coming to the Disney World bubble, but it has only now become official.

That being said, when the NBA originally played out their 2020 season at Disney World, it began while the parks were still temporarily closed, and continued into the official phased reopening of the Walt Disney World Resort. However, tourism in Disney World was quite slow even during that time, and many of the resorts had yet to open.

Now, fast-forward 6 months, many more Guests are beginning to visit Walt Disney World, and the effects of having the NBA G League occupy some of the space may become more apparent. Although we are not sure as to what Disney’s plan is for the NBA G League, we can take a look at what was done last year for the NBA for speculation and what we can expect to happen for the minor league.

In 2020, the NBA league took up home in 3 different Disney World Resorts:

Having multiple Disney Resorts occupied by the sports league did affect Guests’ vacations once the parks reopened. Disney’s Yacht Club was fully closed to Guests and Disney’s Grand Floridian was partially blocked off with barricades. Now, with more Guests staying at Disney Resorts, it will be even tougher to segregate those areas.

According to CBS, the schedule for the NBA G League is as follows:

That being said, there are 2 Disney Resorts in the Deluxe category that are currently not accepting bookings before May at the earliest, which means the teams could reside in either location and be out of Guests’ sight (if the Resorts are ready to have occupancy that is).

The Disney Resorts in questions are:

This is pure speculation at this point, but it would make sense to place the players in a resort away from Guests to maintain a good level of privacy for both Guests and NBA G League players.

Disney has not released any statement to cause concern for Guests arriving in Disney World between January 26 through March 9, so it is likely that the events taking place at the ESPN Wide World of Sports will not impose any direct changes on Guests vacation — but things can always change at any moment, and details are yet to be announced. Inside the Magic will keep you posted as we get information.

Do you think that having the NBA G League utilize a Disney Bubble is going to affect Guest visits? Let us know your thoughts!

Comments Off on Another NBA Bubble Is Officially Returning, How it Will Impact Your Vacation