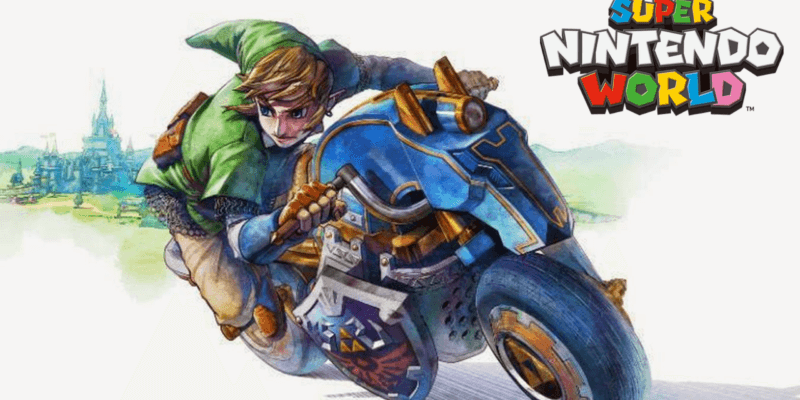 One of our biggest questions since Super Nintendo World opened is “when will we see non-Mario IP?” A Legend of Zelda ride is on the top of this fan’s most wanted list — but what would it look like?

Each different legend of the Hyrule hero provides an excellent basis for a theme park ride. Let’s take a look at a few ideas for what we could see in a Zelda themed ride at Universal’s Super Nintendo World.

What kind of ride would suit the Legend of Zelda series?

Universal has shown it can make several different compelling rides out of different franchises. At Super Nintendo World, Mario will be represented by a VR experience, a kart ride, and an omnimover. It seems unlikely that Universal would go for another kart ride, but if it did, The Legend of Zelda: Spirit Tracks provides the perfect template.

However, we think that an indoor rollercoaster with 3D elements is the most likely. Universal has already shown their expertise in crafting this kind of attraction as we’ve previously seen with Universal Orlando’s Harry Potter and the Escape from Gringotts.

A Zelda themed track would likely be “hosted” by a character from the video game series, just like how the Potter characters host the Gringotts coaster. Obviously, Zelda characters aren’t known to be the chattiest, so it would probably be best for guests to be led by characters that have traditionally served Link on his quests. Ocarina of Time‘s Navi or Twilight Princess‘ Midna would make excellent ride guides. Of course, there’s always Princess Zelda herself, too.

Related: What is the Most Hated Attraction in Disney History?

Which game would a Zelda ride be based on?

Let’s be honest. If Nintendo were to make a Hyrule themed land, it would be pretty heavily influenced by arguably its two best games: Ocarina of Time and Breath of the Wild. Breath of the Wild, in particular, has been a smash hit for Nintendo and is even reportedly getting a sequel game.  I personally hope to expect Calamity Ganon and a whole host of shrines if we ever get a Zelda themed land.

However, for the basis of an individual Legend of Zelda ride, we can imagine Nintendo digging into some older classics. There are over 20 games in the series plus spinoffs to pull from. Universal could theme the ride around the Great Sea from The Wind Waker, Koholint Island from Link’s Awakening, or even the kingdom of Termina as seen in Majora’s Mask.

Of course, the ride doesn’t have to be based on one single game. It could amalgamate bits and pieces from the Zelda universe into one wild ride. Zooming through a tour of Death Mountain and other iconic locations from the NES era all the way up to Breath of the Wild would be a nostalgic overload for Nintendo fans.

What other links to the Zelda series could we expect?

As Super Nintendo World focuses on integrating exciting experiences into every aspect of the park, we’d expect the same treatment for the Zelda franchise. As such, the epic Power-Up Bands seen in the Mario areas would have to interact with Zelda themed objects around the park and let guests accumulate rupees instead of coins. Any Zelda fan will tell you that rupees are an essential component of any good Zelda game, so we’d expect to see them at Super Nintendo World too. Of course, this is all speculation and theories at this point and Universal has not confirmed these additions.

There is currently no indication of whether Nintendo has any plans to bring Hyrule, Lorule, Termina, or any other Zelda themed locations into the theme park. However, with Breath of the Wild’s continued success, we wouldn’t be surprised if a Zelda ride or even a whole land was on the cards over the next few years.

Reportedly, a Donkey Kong Country land and ride are in the works! Hopefully, we’ll see Zelda theming a well as Animal Crossing, Star Fox, and Pokémon attractions in future expansions.

Comments Off on Could Universal’s Super Nintendo World Design a ‘Legend of Zelda’ Ride?