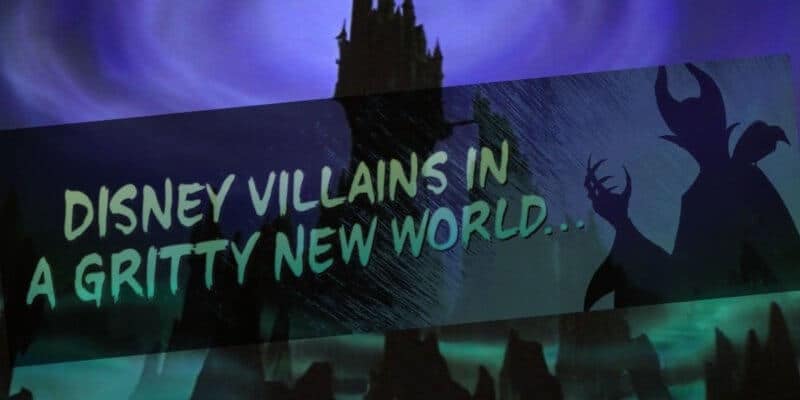 Disney has been coming out with several new book series that have been huge hits for all ages. You may have heard of the Disney Chills series or maybe even Serena Valentino’s Villains series, but now Disney Books is giving us a brand new fairy tale — City of Villains.

This isn’t like any ordinary fairy tale though — In fact, it is a crime-inspired fairy tale that follows a police department intern as she achieves her dreams of becoming a detective. As she finally receives her chance to investigate a missing person case, she is soon face-to-face with some of the most iconic Disney villains of all time. I’m talking Captain Hook, Ursula, and the one and only, Maleficent.

The official description of the book reads:

Disney’s Villains meet Gotham in this gritty fairy tale-inspired crime series. Mary Elizabeth Heart is a high school senior by day, but by night she’s an intern at the Monarch City police department. She watches with envy from behind a desk as detectives come and go, trying to contain the city’s growing crime rate. For years, tension has simmered between the city’s wealthy elite, and their plans to gentrify the decaying neighborhood called the Scar-once upon a time the epicenter of all things magic. When the daughter of one of the city’s most powerful businessmen goes missing, Mary Elizabeth is thrilled when the Chief actually puts her on the case. But what begins as one missing person’s report soon multiplies, leading her down the rabbit hole of a city in turmoil. There she finds a girl with horns, a boyfriend with secrets, and what seems to be a sea monster lurking in a poison lake. As the mystery circles closer to home, Mary finds herself caught in the fight between those who once had magic, and those who will do anything to bring it back. This dark and edgy YA series explores the reimagined origins of Maleficent, Ursula, Captain Hook, and other infamous Disney Villains like you’ve never seen before.

And just recently, D23 released the first chapter of City of Villains, which you can read here. The book is now available for preorder, which will hit shelves on January 26.

Could City of Villains Come to Television?

After reading the first chapter of the book, I think this could make for a great television series or even a movie! It’s no secret that we love our Disney Villains and that crime-inspired television series and true-crime documentaries are taking over our streaming services, so why not bring these two phenomenons together and make a television show based on City of Villains?

It would be amazing to see a high school senior become a police intern who has to take on some of the most iconic Disney Villains of all time. This situation really reminds me of a similar plot in a little film you may know as Zootopia. To refresh your memory, a little bunny, Judy Hopps, follows her dreams and becomes part of the Zootpoia police department, where she isn’t taken very seriously. In fact, she is put on parking ticket duty. But, she soon becomes involved with the biggest case the department is currently working with and proves herself to everyone who ever doubted her.

From what it sounds like, police intern Mary Elizabeth Heart in the book series, City of Villains, could be very similar to Judy Hopps, and with the success of Zootopia, I could see a City of Villains show working just as well.

Personally, I really think Disney could do a lot with a crime-inspired fairy tale and I would love to see them turn this into an animated television series.

What do you think? Do you want to see a crime-inspired fairy tale television series? Let us know in the comments below.