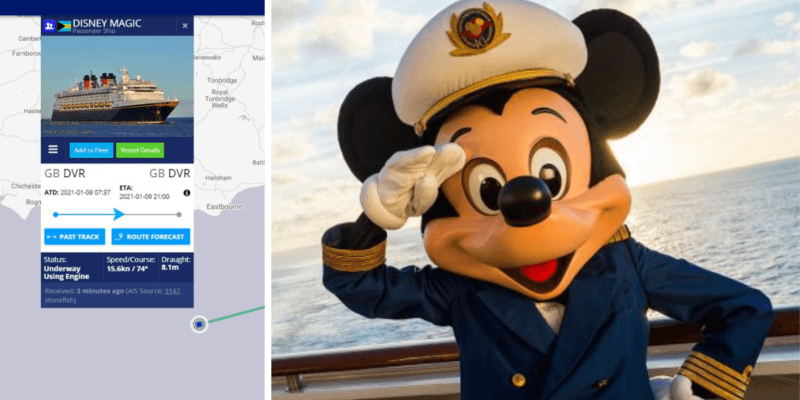 The Disney Magic was spotted in the English Channel today, Saturday, January 9, undertaking a short cruise under its own power in and out of Dover, England. One has to wonder what this means for the only remaining Disney Cruise Line ship left on the far side of the Atlantic Ocean — the Disney Dream, Disney Fantasy, and Disney Wonder have all returned to port in Florida or Castaway Cay, Bahamas at this time.

According to MarineTraffic.com, the Disney Magic is taking a day trip in the Channel, leaving Dover at 7:37 a.m. local time. It is scheduled to arrive back at port in Dover at 9 p.m. local time tonight.

We noticed the Disney Magic doing something similar just over one month ago, but that short voyage was deliberately labeled as “Engine Trials” and was a multi-day trip. This new back-and-forth trip has no such caveat. So, what could this voyage mean?

It could simply show the crew’s intent of keeping the ship’s mechanics in shape for a swift return to sailing, as it is necessary for a ship’s engine to be constantly checked to ensure stability and reliability. But, the question of where the Disney Magic will be sailing from when passengers are once again allowed onboard remains in question, as it is still unclear if it will remain in European waters preparing for the already scheduled sailings there, or if it will eventually join its sister ships the Disney Wonder, Disney Dream and Disney Fantasy in Port Canaveral, Florida.

This activity could theoretically further signal its residency in England, conducting the tests necessary to resume operations there while the rest of the Disney Cruise Line fleet works to earn their Conditional Sailing Certificates from the CDC. It is, however, important to note that Disney Cruise Line officials have not yet made any official remarks regarding when — or where — the DCL fleet will return to sailing.

Disney Cruise Line could be preparing for what are known as “cruises to nowhere.” These itineraries involve one or two days at sea with no ports of call other than the departure port. This experience is already offered by Celebrity Cruises in certain markets. Called “Sampler Cruises” by Celebrity, these sailings offer 3-day, 2-night trips in and out of a single port with one full day at sea in-between.

It could be possible for such cruises to occur in and around the English Channel. Again, however, Disney has not confirmed anything about when they will once again allow passengers to board their cruise ship fleet — given that the first cruise ship that attempted to set sail in Europe last summer experienced a COVID-19 outbreak, Walt Disney Company officials are undoubtedly working hard to ensure the same doesn’t happen on a Disney Cruise Line vessel.

Throughout the pandemic, the company has been praised for its theme park health and safety protocols, many of which are likely to also be implemented by Disney Cruise Line.

As stated, however, this is all speculation at this time. We at Inside the Magic will continue to update our readers on the status of Disney Cruise Line as more information comes to light.

Did you know you can plan your 2022 Disney Cruise right now? Our friends at Academy Travel are standing by ready to help you set sail on the most magical Disney vacation possible. Click here to learn more and to receive your free, no-obligation quote today!